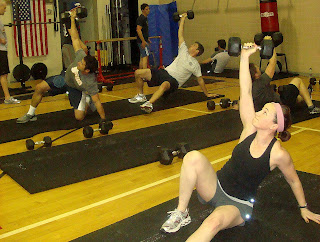 Originally, this was a much longer post, including a 6 paragraph write-up on the Turkish Get-Up. And then, with-in a mere blink of an eye, Blogger did away with my post, never to be recovered. I tried to re-write it, but I couldn’t quite recover, and so went with a shorter, less informative post. Fear not – Blogger won’t keep me down for long – I know for a fact that TGU’s will make another appearance in the not-so distant future, and I will be back with posting vengeance.

So, anyway, apparently there were some Turkish Get-Ups in the workout on Tuesday…

The reason for the TGU’s, as well as the movements selected for the met-con, were to concentrate on some core control, especially after all the heavy work spread across Sunday and Monday, and with 1RM snatches on the program for Wednesday. 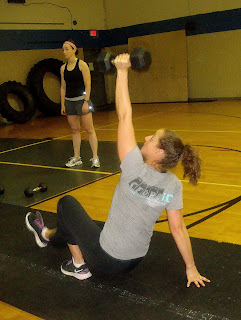 The TGU is a great core conditioner, and unlike a lot of things we do in CF, this movement generally isn’t done for speed. However, it is still a complex movement, consisting of a very particular sequencing of movements. It can take some getting used to, but because it’s a slower movement, you can mentally check-off each step as you go through the movement (wow, wouldn’t a nice breakdown and explanation of each part of the TGU be really useful right here?!?)

Now, speaking of some controlled core work, oddly enough some was planned into the met-con as well.

The workout was set up such that one partner held and L-Hang for the duration of time it took the second partner to complete a half-court and back mummy crawl. You continued in this fashion until each partner had completed 4 rounds. The L-Hangs were done from the pull-up bars, with scaling options that included pulling both knees into the tuck position, or tucking one knee and letting the other leg hang straight down. A new set of parallettes were also available for some L-Sits. 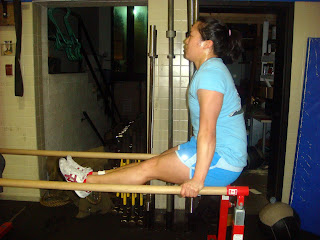 There were also a few “motivational” extras: each time a partner in the L-hang brought their knees in, both partners did 2 burpees at the switch (same for a partner doing a knee tuck if the let one leg drop down); each time the partner doing the L-hang or knee tuck came off the bar completely, both partners did 4 burpees at the switch. These extras were compounding – so if P1 pulled their knees in from the L-Hang, and then also came off the bar, that was 6 burpees per partner done as they switched exercises.

A little something different. Be sure to keep a wary eye peeled for a TGU-revenge post in the near future, but until then, rest up and get ready for a return to mayhem on Thursday.