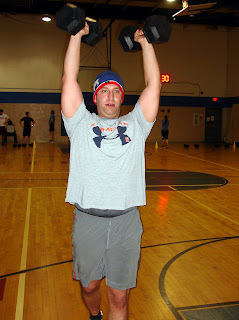 As the title suggests, Thursday night was all about intra-abdominal control – mastering your midsection to maintain good form and posture throughout the entire 15 minutes of workout. This is inspite of the fact that the workout featured three seemingly unrelated exercises to accomplish this: deadlifts, wall walkers, and overhead carry. 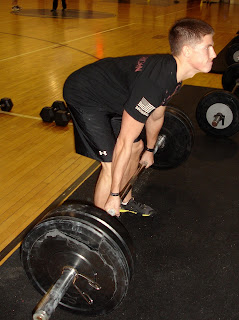 If you’ve been keeping track, twice in the past two months class has performed a workout with striking similarities to Thursday’s: the Deadlift, Hollow Holds, Handstand workout (first done on November 21st, and then again on December 23rd). The big difference, of course, was the pace. 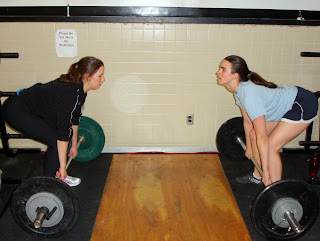 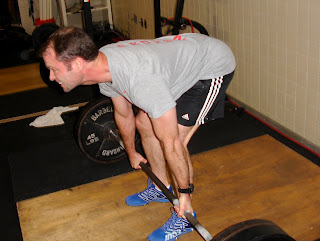 That’s Brendan starting his 8th rep on the 5th round – rep 44 of 45 – and still maintaining great control over his position and form.

A big factor in the workout was the selection of weight. Deadlifts were RX’d at 60-70% of your 1RM (if known), while the OH Carry was done with two DBs equaling roughly half BW. Points of Performance were reviewed, and guidelines established for what constituted acceptable form during the workout. Those points of performance also included a new time-out-style rule which allowed any coach to have an athlete pause during the workout for a given amount of rest time when (A) their form strayed beyond what was acceptable and (B) the athlete refused to stop themselves. 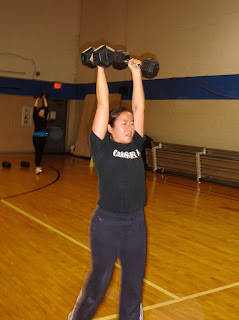 I can say with all sincerity that the over-all attention to form during Thursday’s workout was really impressive, especially by some of our more notorious individuals with uber-flexible backs. However, that’s not to say that last night’s new rule was a one-time only deal. Not by a long shot.

For lack of a better term, we’re going to call this the new rule the Forced Rest Rule. It’s basically an upgraded version of the No Rep rule (as defined, and explained, in our ‘Standards, Progress and “No Rep”!’ blog post). The No Rep rule ensures full range of motion during a workout. The result of the No Rep Rule is that everyone is performing the same complete movements, and, consequently, finishing the same workout. That’s not to say that the Forced Rest rule can’t be used as a sort-of “No Rep Plus” mechanism, to be used when someone is repeatedly no repped. But its primary goal is grounded more in safety, rather than fairness.

The timing is not random, as it was just last week that we posted an extended post about regarding safety (‘WARM UNDER THE COLLAR‘). Specifically, we commented that a big part of a coach’s job is keeping all of you safe: showing you how to properly execute a movement, and then ensuring you follow through on that execution as you add weight or reps. The new Rule represents a rather blunt tool which helps us institute the latter.  It allows a coach to stop someone mid-workout to correct their form, or force them to take a breath and re-focus on their execution, or even adjust their weights.

Weights are prescribed, and adjusted, based on what will deliver the best results for your strength and fitness.  When we ask you to calculate weights based off a max effort lift, we’re looking for a max effort achieved with good form (not perfect form, I’ll grant you, but definitely good form). This is not done by using a weight you lifted with form that was so horrendous, the entire gym walked away doubled oevr in pain. Nor is it done using a weight you want to lift in the near future. It’s a weight you’ve achieved. With good form. Somewhat recently (not five-plus years ago. And preferably, with some consistency (i.e., more than once is great).

But Coach, if I want to hit a PR, why wouldn’t I train using that weight as my goal?

Because your body isn’t ready. You’d be over-reaching. Be smart, build your body up to sustain that weight. Just ask your friend and mine, Paula Deen. She liked burgers. She liked donuts. Don’t we all?! But then she decided to combine them. She over-reached. Did she make a lot of money in the process? Sure. But she also ended up with diabetes. So, could you make that awesome PR lift without properply preparing your body for it? Possibly. But is it also worth wrecking yourself permanently in the process? No, no it’s not.


There really isn’t a person in our extended CFDC-family that isn’t getting stronger – just look at all the squat PRs continuously set over the last two months, as well as all the ladies now banging out legit strict pull-ups!  None of these people is getting there through over reaching.  They’re achieving this through smart choices (scaling and appropriate weights) and hard work.  We all have goals of where we want to get to, and sometimes those goals are strength based. However, the steps to achieve those goals are based on what you’ve achieved in the past, not what you want to achieve in the future. It’s the circle of lifts.
and cue the Lion King soundtrack…

First and foremost, best of luck to Sebastian and Tom A. who are heading off to Charlottesville to compete in the SuperFit Games this weekend.

Also, regarding the Smackdown, I know there are still a few people either looking for a team to compete on, or looking to complete their team roster with one or two people. If you’re one of those, please feel free to leave a request in the comments section. If you need more information, you can find it here on this CF Balance webpage: http://www.crossfitbalance.com/balancecfbowl/