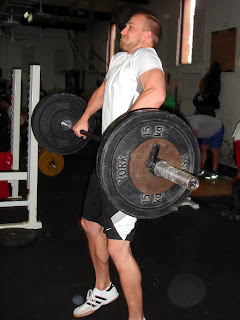 Another big Sunday class was greeted with another big dose of the cleans – not that that’s a bad thing of course.

After general warm-up on the court, class broke out into groups of 3-4 people to prep for the days strength session, which started by highlighting two of the most important pieces of the clean: full extension and speed pulling oneself under the bar. To do this, everyone did one set with the bar only, alternating between one hang clean shrug (basically the “jump and shrug” portion of the clean) and one tall clean (from the tip-toes, shrugging and pulling into a full squat clean) until they had done 3 of each.

The second warm-up set had everyone build on the first, by again performing the tall clean, but then following it with a hang squat clean. The first focuses on speed under the bar, while the second piece helps by adding some hip extension (the “jump and shrug” piece) to provide a little more weightlessness to the bar, which of course translates into more time to pull under the weight. Individuals performed the first set of 1 tall clean and 1 HS clean with the bar only, and then added weight for the second set. 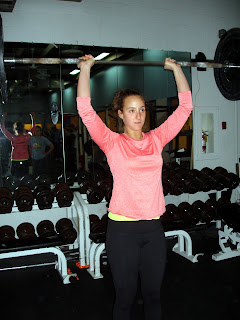 Finally, each group was given 8-10 minutes to find a working weight for the combo (which, for most, should’ve been in the neighborhood of 60 to 65% of your 1RM clean). Working sets were un-timed, but the goal was to rest no longer than 3 minutes in between sets. In this manner, each group rotated through until each individual had completed 10 sets of 1 power clean, 1 hang squat clean, and 1 push press/push jerk/split jerk. 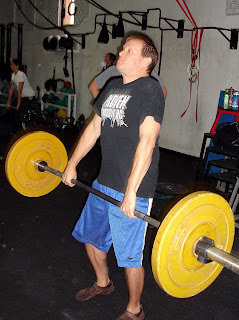 The big emphasis here, by way of practical comparison, is on the proper application of the second and third pulls of the clean. In the power clean, the second pull (from the top of the knees to the hips/stomach area) must necessarily be extremely powerful, since the weight must travel much higher – all the way up to at least the sternum – in order to be properly received in the rack position. There is a bit of a third pull as lifters will often bend the knees slightly to recieve the bar in a power clean, but it’s no where near as clear of a third pull as in the hang squat clean. In the hang squat clean, the second pull, although still powerful, takes a slight back seat to a true third pull, in which the lifter pulls themself under the bar to receive it in the rack position. 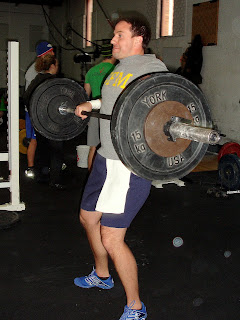 If this all sounds like gibberish to you, take a minute and make the jump to our “CLEANED-OUT!” blog-post discussing the three pulls of the Olympic lifts and the common errors associated with each. At this point, the points made in that post should be at the forefront of everyone’s mind whenever either of the Olympic lifts come up in class. 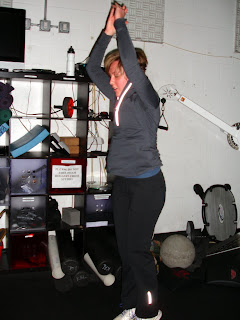 Great work in another big class. There are some great improvements across the board in people’s cleans – the attention to detail is really starting to pay off. Keep up the good work!