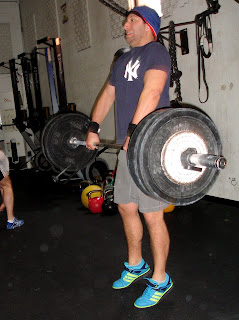 It was a slightly more intimate group this past Sunday – and by intimate, I mean not 25-plus people – which worked out well as CFDC reached back for an old school double-strength and simple-metcon type class. 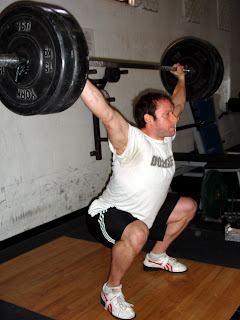 Overhead squats are clearly one of those love-hate exercises: either you love them, or you love to hate them.The rep scheme for the OHS was set up as 10, 10, 8, 5, 5, 5, with the basic goal being to find a 5RM for the day. They can be maddeningly frustrating, mostly due to the fact that they require so many different attributes (mobility, flexibility, strength, balance, and, maybe, just a bit of patience – perhaps we should suggest adding that to the 10 general skills of CF?). 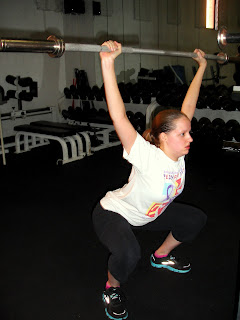 But perhaps one of the best things about OHS is that you can’t really cheat on them. Oh, sure, you can short the depth of your squat, but that will quickly get you called out by a coach or your classmates (or both). But there are no real corners to cut in order to get around personal deficiencies. You can’t muscle through them. You can’t drop, bounce, swing, or really use any sort of momentum. The addition of any of these, and the weight overhead will quickly let you know you are trying to cheat or are getting lazy by promptly falling to the floor. It’s just good form and lots of control. 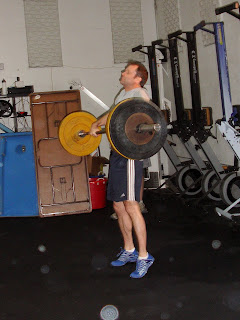 The pulls, either snatch or clean, are great tools for teaching the explosive portion of the Olympic lifts without having to worry about the “catch.” This means a lifter can concentrate on generating maximum power through the extension in the second pull, without getting caught up in how he or she is going to receive the weight. The lack of catch, or receiving the bar, also means that lifter can use more weight than they typically would be able to clean or snatch.

The basic Clean Pull, done from the floor with half just the shrug portion of the second pull (as seen HERE in this video from Performance Menu); and,

The Clean High Pull, also done from the floor, but with a full second pull, including both the shrug and arm-pull (as seen HERE in this second video from Performance Menu).

There is also an extended version of the clean high pull in which the lifter also adds the beginning of the third pull (pulling under the weight).

As seen above, the lifter quickly hits full extension, shrugs, and then pulls with the arms while simultaneously unlocking the knees a second time. This initiates the third pull, and is a great addition for working that tricky transition from power cleans to full Olympic clean (a.k.a., the squat clean – a term which I realize most Olympic lifters frown on).
Met-Con:
2 x Team Suicides

Great work all around. There’s clearly a lot of improvement on form, and it shows. Keep up the good work. Also, congrats to Dan on he and Danielle’s second place finish in District CrossFit’s Battle for the Capitol competition on Saturday. Lastly, if you’re still interested in competing in the Smackdown, registration has been removed from the CrossFit Balance webpage, but there are a few spaces left, so please let Tom or I know if you’re interested.