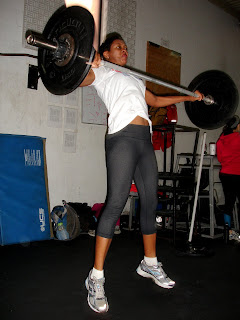 Congrats again to all the athletes who competed in the Smackdown on Saturday, and a big thanks to all the CFDCers who came out to cheer on their fellow athletes. The turnout, and resulting energy, was awesome, and while all the teams performed admirably, it was really inspiring to see some of our first time competitors push themselves. The event was a true success, and will hopefully lead to more such events in the future. We’ll post a few pics, as well as a link to even more pics, later today.

In the meantime, a quick recap of Sunday’s class, which could’ve been run as a competition itself with nearly 30 people showing up to workout! 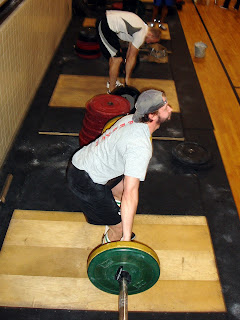 Sunday’s class really lucked out, and had both Sara and Jenn Sergeant helping out with form and technique. It’s been a while since we reviewed the points of performance for the snatch, and this seems like as good a time as any to re-post our Points of Review for the Snatch, as I heard both Sara and Jenn pass along a number of these pointers more than a few times Sunday morning:

(1) Start with shoulders slightly in front of the bar, body weight over your ankles, butt low(er than a deadlift), and chest up. Your gaze will be neutral to slightly downward. Hands are wide with, preferably, a hook grip employed;

(2) Pull off the floor and imagine pushing your feet down through it. This keeps your shoulders in front of the bar for a longer period of time but keeps the hips from rising faster than the shoulders. Quads and hamstrings will engage at approximately equal force;
(3) As the bar passes your knees, explode upwards with STRAIGHT arms, and imagine driving your shoulders through the ceiling. Be sure to get full extension. The rise of the bar and a straight bar path comes from the smooth transfer of force from the legs through the shoulders. 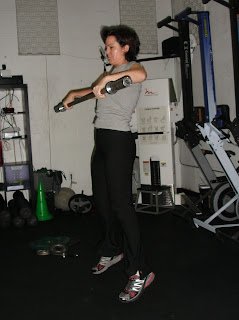 (4) Pull yourself under the bar at a faster rate than the bar is falling. Snap the bar into position with shoulders driven up towards the ears (active shoulders) to support the weight. Be sure to engage the glutes and abs so prevent over-arching and keep the chest up. This will help put, and keep, the bar over your body’s center of gravity.
THINGS TO AVOID:
(5) Pulling early with the arms. The most common fault with a lot of lifters, where-in they will begin pulling the weight upwards with their arms before they’ve hit full extension. This negates the power generated by the hips, and will severely limit the amount of weight that can be lifted;
(6) Donkey kicking or stomping your feet. This kills the upward-driving power in your first and second pulls. The sound your feet make should come from the speed from which they transition to the squat position, not the force from which you pick them up and slam them down;
(7) Watch for the hip hitch. This bumps the weight out causing you to over-compensate to get under the bar. Instead, focus on an upward shoulder drive with full extension;
– – Note that No. 5, as well as No.’s 6 and 7 to some degree, can be corrected by really focusing on No. 2 above: getting a full extension through the second pull. – –
(8) Lastly, take YouTube videos of top level athletes for what they are: amazing and entertaining feats by strong athletes. It’s not always a good idea copy or mimic your favorite lifter’s specialized lifting techniques. Like a Major Leaguer’s baseball swing, no two are alike. Similarly, an elite level weightlifter’s mechanics may have been honed over years and tailor-made for his or her body. Examples include extreme laybacks and bumping the weight with your hips. There are a host of reasons why it works for an elite athlete but not for the novice. It’s best to stick to the fundamentals with an emphasis on a straight bar path and making the lift as simple as possible.
Met-Con:
Tabata Push-Ups, Sit-Ups, Squats, & Mtn Climbers 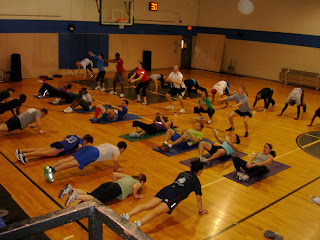 With such a big class, and such limited space in the studio, things moved down the basketball court for a short tabata-themed met-con. For this version, everyone rotated through the exercises one after the other – so, instead of finishing all rounds of an exercise before moving on to the next, athletes performed 20sec of work of one exercise, and then rotated to the next exercise during their 10sec break. This kept up until everyone had completed five rounds of each exercise. Not a bad way to start off Superbowl Sunday. Please be sure to check back later today and tomorrow for some information laden posts, including pictures and a quick run-down from Saturday, and information regarding the 2012 CrossFit Games Open Qualifiers!