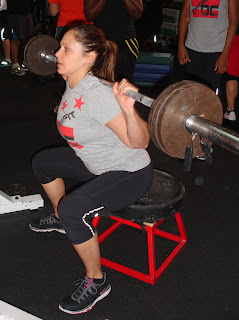 We love us some box squats at CFDC, and for good reason: “The form is the same as the regular squat but with the added bonus of being able to develop explosive strength.” So say’s Dave Tate, and since his best squat was over 900 pounds, he probably knows his sh!t when it comes to squatting.

Although we perform box squats quite a bit, it’s not a bad idea to review a few key points about proper execution.

First, control yourself down onto the box. Don’t flop or crash down. The descent should be controlled the entire way: initiate with the hips, forcefully pushing the butt back and slowly controlling your descent until you are fully sitting on the box. 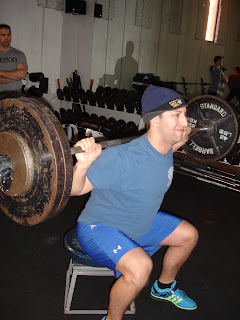 Second (and probably most important when box squatting), when you sit on the box, you are de-loading your legs, NOT your upper body! Your upper body should remain tight from the moment you begin to squat down and should last until after you’ve sat on the box and stood all the way the back up. The key is taking a deep breath into the abdomen and holding it there – think about squeezing your abs as if someone was going to punch you. The goal should be to hold the breath through out the movement in order to help maintain a tight mid-line and support the spine. Breathing on the box will cost you stability, and shouldn’t be done unless it’s absolutely necessary (i.e., you’re going to pass out). In this circumstance, breath quickly and forcefully – breathing shallow into the lungs, rather than deep into the gut, so that you can maintain tension in the abdomen.

Lastly, due to the nature of the box squat, it’s imperative that you have at least two spotters when going for max attempts, especially if you’re not working in a cage/power rack.  It’s damn near impossible to bail on box squat, and extremely tricky for a single spotter to help a lifter up off the box and back into the rack.  If, at any time, you don’t think a second (or third or fifth or whatever) rep is going to happen, play it smart, and simply re-rack the weight. 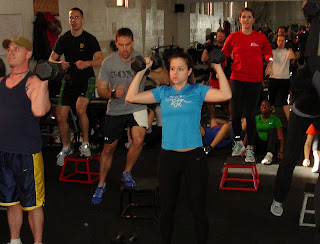 The met-con was simple and straight forward: perform as many reps as possible in two minutes of each of the above exercises. Everyone’s was given 30seconds to rotate to the next exercise, and then repeat. Class only went through the circuit once, but it seemed more than enough to give people’s heart-rates a slight increase. 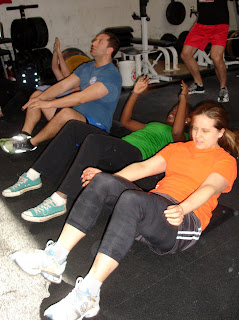 Congratulations to all the lifters who competed this past weekend in Baltimore. I’ll try to report on the everyone’s final lift numbers as I get them. In the meantime, there’s still 9 days left until the first 2012 CrossFit Games Open workout is announced. We now have 17 people signed up for the Open workouts, but we’re hoping to see a few more sign up. If you have any doubts, concerns, questions, etc., please don’t hesitate to ask.