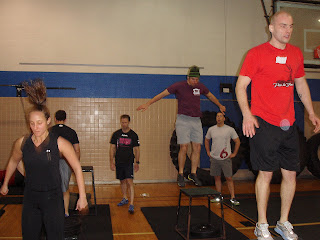 The 2012 CF Games Open is just over the horizon, and with that in mind, class set about reviewing some important skill work followed by a some short-burst conditioning.

1 set of Hollow position progression work on floor: first pulling the knees to the chest, then extending one leg, then the other, then finally extending both legs; the goal each time is to work on tilting the pelvis forward and pressing the low back into the floor. Remember, this is NOT an ab exercise! The point of this drill is to teach you control over the hollow position in an unloaded position (i.e., not hanging from the bars). After working through the hollow position progression, class hit one set of hyper-position holds before moving over to the bars to apply these positions to some kipping work.

1 set of 3 Arch & Hollow Holds: the point here is to mimic the two extreme positions of the kip, which were just practiced lying on the floor, but now hanging from the bar.  It’s usually best to start with the hollow position, holding for at least a 1 to 2 second count, before coming back to center, and then transitioning and holding the hyper position. Athletes cycled between the two positions at least 3 times before coming off the bar.

1 x 5 Arch & Hollow Transitions: think of this as a slow kip; the point is to start blending the two positions of the kip into a continuous and smooth kipping motion but still slower than a full kip; and, finally,

1 x 5 Full Speed Kipping: this is where we speed up the arch and hollow transitions into a full speed kip, with each athlete trying to string together at least 8 to 10 smooth and controlled kips before coming off the bar. 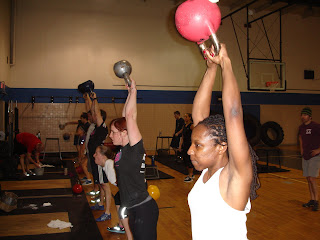 Short, intense all out efforts with an equal amount rest time. Everyone completed all 6 rounds at one exercise before taking a short break (3-4min) and then moving on to the next exercise. KB Swings were American (overhead) and Double Unders were not scaled – those without appreciable double unders simply used each 30sec time block to work on transitioning from single skips to at least one DU (and then back again if possible).

We did introduce a new standard for the box jumps on Tuesday. Athletes were allowed to choose whatever height of box they wanted for the workout. However, our usual standards of jumping still applied, but with one small tweak: you could step up/step down; you could jump up/step down; or you could jump up/jump down BUT ONLY IF you immediately transitioned back into another jump up (and the immediate transition meant instantaneous – no pausing on the ground and getting reset). This is all about preserving and effectively utilizing tension garnered from the absorption of jumping down. When you immediately rebound into the next jump up, you are using the maximum-amount tension built up in the leg muscles from the absorption of the landing. The longer you spend on the floor, the more tension seeps out of your legs muscles, requiring more exertion for the next jump. With this in mind, it should be easier to understand why the optimal place to rest during box jumps is actually on top of the box, rather than on the floor. 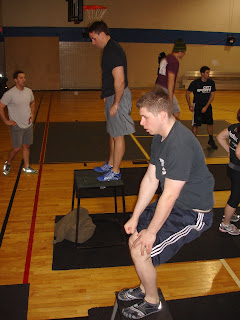 One final point regarding box jumps…or really any jumping of any kind…or, frankly, any explosive movement which uses momentum from the body for power: don’t let the knees collapse. We hear this a lot for squats (“knees out!”), but the same applies for push press, jerks, jump rope, and, yes, box jumps. When the knees cave in, either during the jump or during the landing, your knees are incurring what’s known as “valgus stress.” Let me break that down for you:

The Technical definition: A force applied to a joint that causes the distal aspect of a limb to be moved away from the midline of the body;

So, definitely something to be avoided. And avoidance is as simple as remembering to keep the knees pushed out and in-line with the toes when performing any of the above exercises. Example: 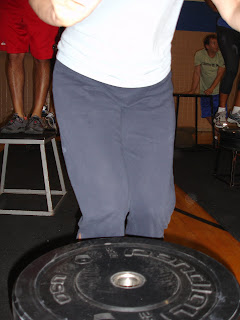 In this picture, the athlete has let her knees collapse during the take-off of a box jump; 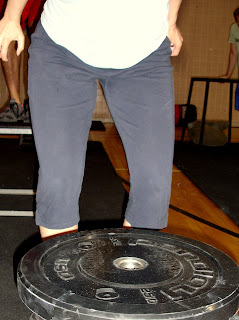 After being reminded to not let the knees collapse, the athlete made sure to push the knees out slightly on the next set of box jumps. The result is pictured here, which in turn required less energy to jump onto the box and felt better.

Nice work all around. There’s still time to sign up for the Open. Most information is contained in the header above, as well as the links provided, but please don’t hesitate to ask if you’re on the fence or simply want to know more before committing. See you all Thursday.