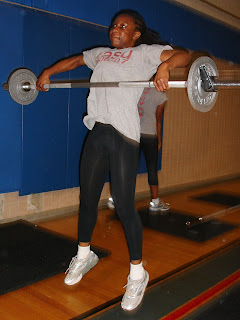 With the Open well under way, and knowing CFHQ’s penchant for hi-rep Oly lifts and/or overhead squats, Tuesday’s class took a little time reviewing how best to approach such workouts, and then putting some of that information to practical use.

Performing either Olympic lift for multiple reps at a time can be tricky – many people struggle to perform a single efficient rep at a time, let alone 5, 10, or even 20 reps back-to-back. However, there are a few tips and tricks which will make snatching (and cleaning) for reps a little easier. 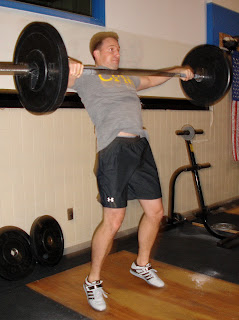 Hook Grip
In short, the hook grip is the best grip you can have without using straps. Admittedly uncomfortable at first, using the hook grip is key to helping Olympic lifters get more weight off the platform, especially during the acceleration of the second pull. For CrossFitters, it also translates into more reps, as use of the hook grip helps relax the forearms, which in turn keeps the shoulders loose and helps avoid pulling early with the arms. To set the hook grip, simply press the palm of your hand tight against the bar, then wrap your thumb around the bar first, before grasping your thumb with at least one finger, preferably two (the remaining two fingers will be holding on to the bar).

Resetting the Grip in the Pocket
If you’re unable to keep the hook grip in the overhead position, then you’ll need to reset the grip before attempting the next snatch or clean. While you could do this by setting the bar on the ground, resetting the hook grip, standing up, and then taking the next lift, this will eat up a lot of time. The alternative is to reset the grip “in the pocket,” with the bar tight against the hips and pinched between the abdomen and thighs. In this position, the body is holding the weight up, allowing the you to readjust the hands and grip. Less energy, less time, more efficient. 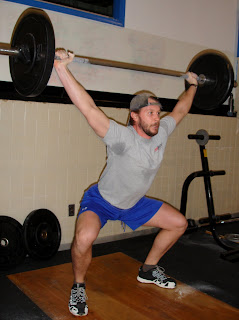 Static Feet
As a pure Olympic lift, the Snatch calls for the lifter to snap the bar overhead during the third pull while also jumping their feet apart to create a stable base (a base in which, if need be, the lifter could get into a full squat). For the purposes of CrossFit, and more specifically, CrossFit workouts with multiple reps and lighter weight, continuously jumping the feet apart and then resetting isn’t really optimal. To add speed and efficiency, try performing each rep without moving the feet – this will allow you to hit full extension and then immediately bring the bar right back down and into the next rep (emphasis is placed on full extension, because if you aren’t standing tall, with the hips completely open at the top of the rep, it won’t count). Keeping the feet in place definitely depends on your level of comfort and proficiency with the snatch, as well as with the weight being used for the workout. In other words, if you’re still learning or getting used to the movement, then trying to keep your feet in place isn’t appropriate.

Guiding the Bar Down
Of course, at some point, you’ll need to put the bar down (whether you want to or not). At the end of a workout, when time is up or the reps are over, it doesn’t really matter where the bar ends up. However, during the workout, having the bar bounce and twist and roll 10 feet away from you is less than optimal. Instead, try to guide the bar down, releasing it only as it passes chest/waist height, and controlling the bounce as much as possible. There’s nothing more frustrating than having 15 seconds left in a workout in which to fit in as many more reps as you can, only to have to waste 12 of those seconds re-collecting your bar and getting ready to lift. As any seasoned CF competitor will tell you, every rep counts.

With all this in mind, class turned it’s collective attention to Tuesday’s workout.

Owing to the number of people, class was paired off and heats were run every 2 minutes. That meant you had two minutes in which to complete all of your reps and get out of the way before your partner started their reps (although, a little leeway existed as each person completed their box jumps). 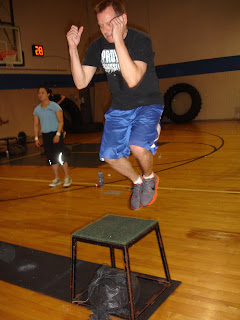 This workout definitely seemed to sneak up on people. While the numbers didn’t appear over whelming, the combination of gassing out before the barbell work (the box jumps), keeping hold of the bar for all 24 total reps of snatch and OHS, and trying to cram all that work into a short 120 seconds really proved to be a killer. Awesome to see people pushing themselves to the limit in order to get all their reps in before their partners needed the bar. 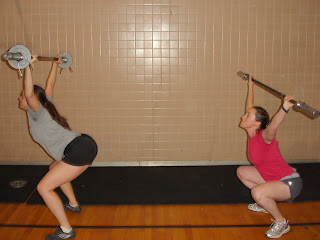 Don’t forget (as if any of you would), 12.2 get’s released tonight at 8pm EST. As soon as it’s up, we’ll update the Games header on the blog with the new workout. Until then, try not to get washed away in the rain.