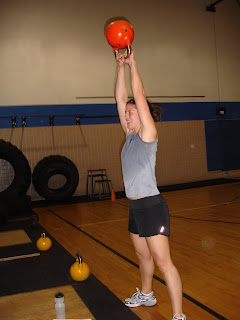 More than a few people noted Tom’s prescience in putting together Tuesday’s programming, and this will mark at least the 4th year in which he has programmed a class or pre-competition workout that is eerily similar to a workout in the competition. To complement Tuesday’s snatch-tips, Thursday’s classes included some pre- and post-workout snatch-assisting mobility. Remember, we will be kicking things off on the 12.2 workout tomorrow at 1pm; we will include a warm-up for everyone, but please feel free to show up a little early to roll out and get some extra mobility in before hand. 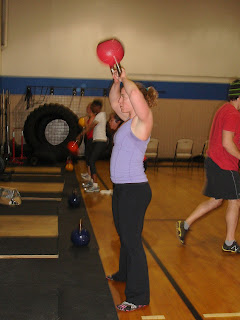 To start off the night, class was introduced to a different approach to an American-style KB swing: the Snatch Swing or “Punch Up.” In this version, the swing, the KB is initiated with the hips, but once the hips are fully extended, the athlete pulls the elbows in towards the body. This shorten the arc of the swing, reducing the distance the KB has to travel. As the KB passes the head, the athlete re-extends their arms, in effect punching the KB into the overhead position.

A few key points to performing the snatch swing/punch-up:

First: You must initiate with the hips! Only the arc of the KB is changed, not how you impart momentum. Pop the hips forward; don’t pull with the weight up with the shoulders. 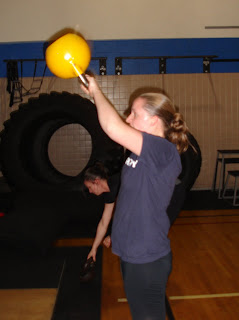 Second: To alter the arc of the KB, pull the hands in towards the body slightly, NOT up towards the ceiling. The first will cause the elbows to pull back, which is what shortens the arc of the KB. The second will cause the elbows to pull up (as in a high pull) and causes the shoulders to do the lifting, rather then utilizing the momentum of the hip pop. 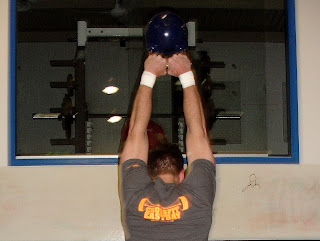 Third: To better control the KB in the overhead position, slide the hands to the corners of the KB and envision pulling the handle apart. This will help you maneuver the KB into a vertical position (rather than tilting forward), but will also help prevent the KB from flopping over backwards at the top.

When performed correctly, the KB snatch swing effectively allows an athlete to perform his/her KB reps at a faster rate than a normal American-style swing. To put this theory into practice, Thursday’s workout included a few KB swings (whoda thunk it?) 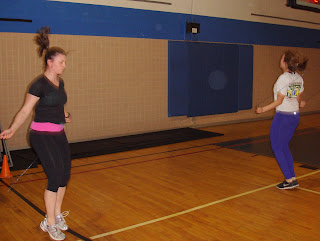 Everyone started the run together and aimed to fit as many rounds in as possible within the 12min time frame. There were a few shared KBs, so if the KB was in use, athletes were allowed to start with the DUs instead. Single Skips were subbed for DUs at a 2:1 ratio.

Post workout, it was time for some mobility dedicated to prepping people for Saturday’s fun. 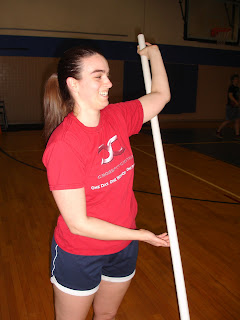 Keys to performing this stretch include keeping the elbow at 90 degrees, keeping the upper arm out to the side of the body (not pulled in across the chest), and making sure the PVC is in line with the forearm. 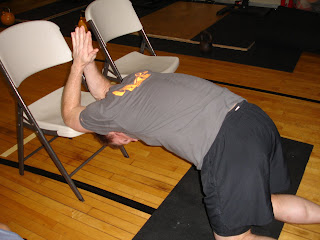 One of the stretches Winnie took us through a week ago, but was revisited again on Thursday with a few additional instructions: be sure to maintain a hollow position (tilting the hips towards the ground and gently rounding the lower back) and forcibly flexing the triceps, pushing the elbows down into the chair.

Death Stretch (AKA the Couch Stretch) 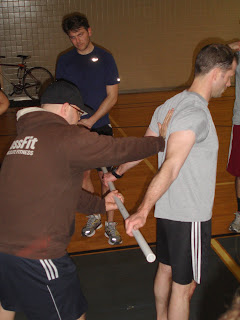 Another stretch we’ve done in the past, but with a slight modification (again, thanks to Winnie): instead of simply pulling upwards on the PVC, the assisting partner places one hand in the middle of the stretches upper-back, and then pulls down and back on the PVC. This prevents the stretchers shoulders from excessively rolling forward in the sockets, while also helping them keep an upright torso.

Combined with the bully shoulder drill and keg drill (which we reviewed and used back in January for a snatch/OHS workout), each of you should be adequately armed to prep for Saturday’s 12.2 workout. Until then, rest up, and get ready to have fun!