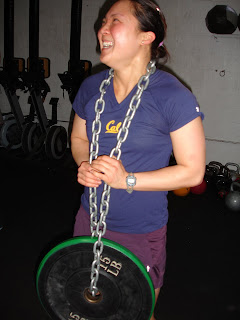 Congratulations Open athletes, with just two workouts left, you are officially over the hump! Friday/Saturday definitely took it’s toll on people, both physically and mentally, so Sunday’s class dialed things back a bit and tried to introduce a little bit of levity into the week.

Speed-pull deadlifts are about explosive movement in the deadlift – driving the feet into the floor and powering the hips forward to move the weight from the floor and into the lock-out position. Don’t get “speed” confused with “rushing,” though. Speed pulls are about the velocity at which the weight is moved, not rushing through the movements to perform the fastest but sloppiest movement possible. Form and technique are still key – only the weight (decreased) and speed (increased) are changed. 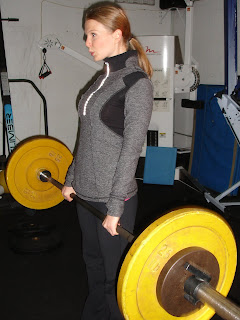 For Sunday’s work, class split into groups of no more than 3 people per bar, and then spent roughly 10 minutes warming up to a weight that was roughly 50% of their one rep max (weights could be adjusted to suit different lifters, but it was suggested that small change plates be used, so that transitions could be quick and efficient). Once an approximate working weight had been established, groups got started on the main portion of the workout: cycling through 12 rounds of 2 reps of speed pulls. Lifters could use either a conventional or sumo stance, but the focus was on bar speed – squeezing the bar off the floor and then exploding upwards into the upright and extended position. The initial movement, described above as “squeezing” the bar off the floor, must still be controlled; speed-pull deadlifts do not change our form or technique, and yanking the bar off the ground hasn’t-been/isn’t/never-will-be appropriate. 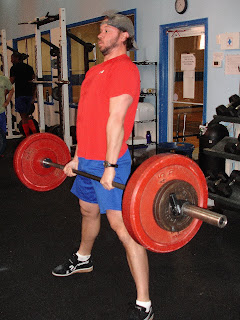 As each partner completed their 2 reps, they stepped back, and the next partner in the group stepped up to the bar to perform their two reps. In this fashion, the group continued to rotate to the bar until each athlete had completed all 12 sets. Once done, the bars were stripped down, and, with the aid of a few new sets of rings, class went to work on a second strength segment: ring dips.

We aren’t able to practice rings dips all that much, mostly because we’ve been operating with two pairs of rings (3 if Tom brings an extra pair in). However, with a few new recently acquired pairs in the gym, class set about working on this much needed skill. Performing dips on the rings adds instability, requiring increased muscular recruitment to help stabilize and support the body. 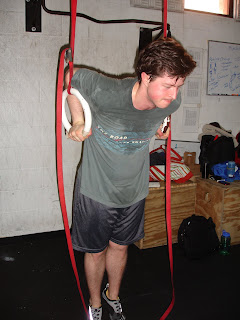 While deadlifts (targeting the hamstrings) and dips (triceps dominated) wouldn’t appear to be related, there is actually a common point of performance between them. When performing either, it’s essential to keep the lats retracted, which in turn keeps the shoulders pulled back and down. A great cue for this is to imagine squeezing a pen/marker/etc in the armpit; the act of forcefully squeezing the arms in keeps the elbows in tight and helps set the lats and shoulders. In the deadlift, this keeps the shoulders from rounding forward, which is what leads to a rounded back. In the dips, this stops the elbows from flaring out, reducing stress on the shoulder and aids in stabilizing the body, an absolute must when doing the dips on the rings. 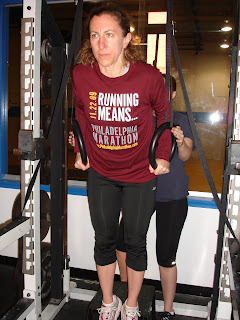 If full-on dips aren’t in the cards yet, there are a few scaled versions which were covered on Sunday. One way is to simply perform a negative – jumping into the support position (with the arms fully extended) and slowly lowering to a point where the shoulders are deeper than the elbows before putting the feet back down. Another way is to use a resistance band, which can be looped around one ring and then held against the other ring. This is similar to using a resistance band for pull-ups, and adds assistance through the hardest parts of the dip. With a few more sets on hand now, look for more ring work in the near future. 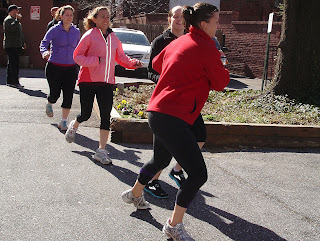 Think of this as an Indian Run (where the last person in line sprints to the front) crossed with a rugby lateral-pass drill. Each group of 5-6 people has a medicine ball which starts with the lead runner and is passed from front to back. When the last person in line receives the ball, they sprint to the front with the ball, and then start the process over again. This was repeated until the group had completed an entire lap of the block (~800m).

Just a little something different to close out Sunday’s class. Nice work through-out class, especially after the beating most people took on Friday/Saturday from 12.3. Speaking of 12.3, how-about a little food for thought?

There are lots of CrossFitters out there on the internet writing lots of articles, whether for official affiliate-sites or just their own blogs.  Most should be taken with some rather large grains of salt; however, from time to time, some of them end up being extremely poignant and timely.  If any of you are looking to slack off from work a bit more today, I would highly recommend that you take a look at the two articles listed below. One is from CrossFit Aspire in NJ, and one is from CFDC’s own Monica Niska, and both touch on extremely important points, not just in relation to the ongoing Open workouts, but to our collective CrossFit experiences. 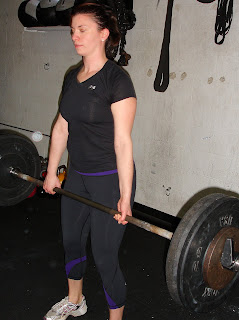 Definitely something all of us, coaches included, should keep in mind each and every time we take on a workout. On that note, rest up, and we’ll see you on Tuesday!