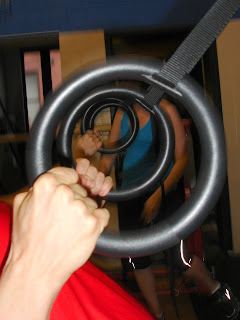 We’re officially over the hump as far as the Open goes; 3 Open workouts down, 2 to go, and the 4th workout is definitely a doozy. Karen + 30 Muscle Ups with 90 Double Unders smashed in between. While many are looking to the DUs and MUs, it’s the first 150 wall balls that will really make or break you. Back in December of last year, we worked through a combination workout of Karen and Annie, and in the following blog-post, we talked about high-rep wall balls and the importance of good form:

It’s not often that wall balls show up in our workouts in such high numbers, but there is definite value to this approach. Anyone who has ever done “Karen” in it’s original form knows how much endurance, both cardiovascular and muscular, that’s required to do high reps of wall ball in any time domain. Maintaining good form throughout the movement is key. Keeping the ball high on the chest (like the front rack of the front squat) while keeping our weight on our heels from top to bottom of the squat will help delay muscle fatigue by keeping us as efficient as possible throughout the movement. Yes, I realize, it’s relatively easy and straightforward to say, but another thing entirely to perform during 150 reps.

Just something to think about when tackling 12.4.

So as to not leave everyone wrecked for this weekend (which includes not just 12.4, but also the D.C. Rock-n-Roll Marathon and Half Marathon), Thursday’s focus was on conditioning and core work. 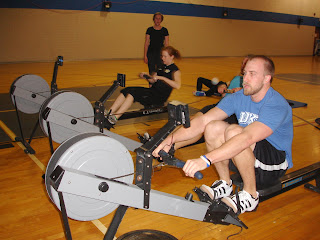 In teams of no more than three, have each teammate complete 3 rounds of the met-con in a follow-the-leader fashion. So, P1 rows 500 meters, and as soon as they’re done, they jump off and head out the door for the Church Run while P2 hops on the rower to complete their 500m. Teams continue in this fashion until each teammate has completed 3 full rounds.

Not wanting all these new rings to go to waste, Thursday’s class closed out with some ring rows and, for those comfortable with the movement, some MU transition work (turning over at the top of the ring row and performing a ring dip). 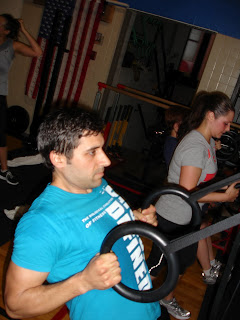 Of course, with the advent of Open workout 12.4, there’s lots of talk about muscle ups, despite the fact that there are 240 reps to work through before actually getting to the MUs. In fact, more often than not, anytime MUs show up in a workout, they seem to become the default center of attention. And why not – MUs are still one of the ultimate achievements in CrossFit.

Overly simplified, the muscle-up is simply a combination of a pull-up and a dip done on the rings with a little transition in between the two. A proper false grip and time spent on getting a firm grasp of the technique, especially the transition, are essential. Of course, there’s lot’s of information on the internet, but check out this in depth muscle-up tutorial from Jim Bathurst at beastskills.com. He’s done a really nice job synthesizing information, including how to get your grip set up and some nice progression work that will help you achieve some comfort in the movement.

As in the last few weeks, we’ll get started on 12.4 at 1pm this Saturday. If you have a few minutes, stop by and cheer on your fellow athletes – by forewarned though, there will be some nearby street closures due to the Marathon. Of course, if you get stuck in such a closure, be sure to keep an eye out, as you might just catch a glimpse of a fellow athlete (like Amelia and Erica) running by. See you all this weekend!