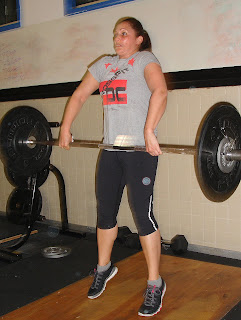 As promised, Tuesday’s classes featured lots of barbell work. However, it all featured a fair amount of skill work, in the form of handstand push-ups (HSPU).

Roughly 20 minutes were devoted to HSPU Tuesday night, including various scaling, set-ups, and execution. Everyone began with a set of kick-ups – that is, kicking up into the handstand position, holding for one second, and then coming back down. Way back in August of 2010, we did a blog-post reviewing the most efficient way to kick up into a handstand with lots of assistance from Jim Bathurst and his Beastskills article on handstands.

After the kick-ups, class was split in two pieces. Those without full ROM (range of motion) HSPU worked on scaled versions, with knees on a box and both hands on parallettes to ensure full range of motion. Those with full HSPU worked on increasing the depth of their HSPU by using plates. This included one set of 2-3 HSPUs with hands on 45# bumpers and two ab-mats, one set of 2-3 HSPU with hands on the bumpers and just one ab-mat, and then, finally, one set with hands on the bumpers but no ab-mats. 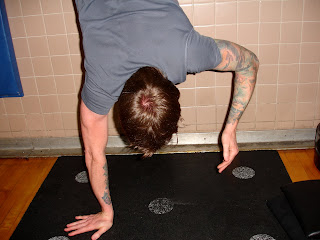 Post HSPU work, everyone in class worked on chest-to-wall handstands. These were broken down into three scaled versions:

(1) Wall Walkers as close to the wall as possible;
(2) Wall Walkers or cartwheels into a full chest-to-wall handstand with at least a 10second hold (the big emphasis here was ensuring the pelvis was tilted forward, keeping the stomach from sagging into the wall); and,
(3) 10 Handstand Shoulder Touches – to complete, get into the handstand position with chest facing the wall, and then quickly retract one hand and touch your shoulder, before replacing the hand on the floor and then following suit with the opposite hand. 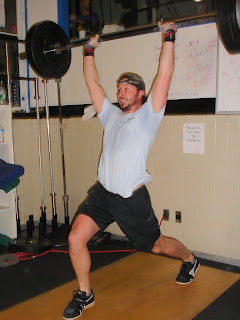 As programmed, each set was to be completed unbroken. So the first two power cleans were done back-to-back, without resetting the grip on the floor, before going right into the hang squat clean (again, without putting the bar down to reset the grip). This was not for time, although rest times varied owing to the various number of people in each group. Athletes were encouraged to increase weight across all 8 sets but without hitting failure as much as possible. More than likely, this would be dictated by an athlete’s max thruster weight. 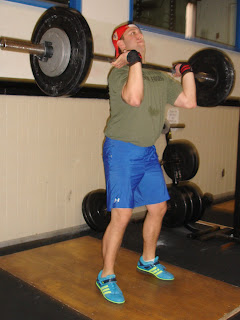 We’ve discussed triple extension in the clean before, most notably last June in a blog-post entitled “CLEANED-OUT!” However, sometimes hitting triple extension during the clean just won’t happen, no matter how hard we try. Maybe you lifted extra heavy the day before, or maybe it’s just been a long day and your body won’t respond the way you want. If this is the case, go back to the basics; break the clean down, or more specifically the second pull, into it’s components to remind yourself of the patterning. With light to moderate weight on the bar, perform the following three-movements in succession:

(1) extend & shrug – open the hips up all the way, and then shrug the shoulders straight up;
(2) extend, shrug, & pull – the same movement as above, but at the top of the shrug, pull the elbows high and outside (think “scarecrow”) so that the bar travels straight up the front of the body;
(3) clean. 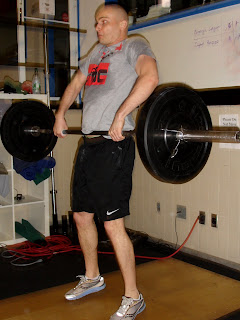 If the first two movements above go OK, but the third, the clean, continues to present a problem, you can try inserting a 4 movement, the “rack delivery,” in between steps (2) and (3). The rack delivery, borrowed from Greg Everett at Performance Menu, should be done with light weight only. This is simply a method of practicing getting the elbows around the bar, thereby transferring the bar from the upward pull to the front-rack position across the shoulders. To perform, start standing tall, holding a barbell in the scarecrow position — bar against the chest and elbows elevated high and out to the sides. From this position, quickly whip the elbows around and turn the bar over onto the shoulders and into the rack position. This is best when coupled with quickly jumping the feet out into a good squat position, thereby allowing the athlete to slightly drop under the bar.

Class ran slightly long, but kudos to everyone for sticking it out to finish their sets. It’s a forgone conclusion that most of you will be waiting with baited breath for the announcement of the fifth and final Open workout, and we’ll be sure to update the blog header as soon as it’s out. Until then, I’ll leave you all with this parting image of Tom A. and Ben who both happened to be Chicago for the same conference and decided to drop into River North CF for a workout: 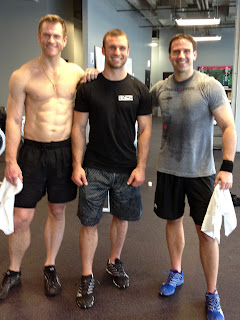 According to Ben, RNCF’s drop-in policy was to bring a shirt from your home gym, or simply purchase one of theirs. Someone should tell them the latter won’t be of much use to Tom A.
.
.