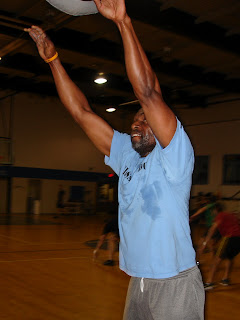 After the upper-body beat down that was Tuesday’s class, Thursday focused more on explosive power, but included some fun options which accomplished that goal.

A unique and fun way to get moving, but also useful for the multi-directional movements that are required – forwards and backwards, side to side, twisting, turning, bending, jumping, and, occasionally, diving, tucking, and rolling.

Another somewhat fun and different, but still useful, CFDC warm-up: Wall ball for height. The basic gist of this drill is to use a lighter than usual medicine ball, and then see how high you could get your wall balls. Rather than the conditioning requirements of, say Karen, this is all about explosive force (and not letting the ball hit you on the way back down).

Once everyone was warmed up, class was separated into groups based on the weight they could adequately use for high rep power cleans. These groups were then given a few minutes to warm-up to their assigned clean weights, and then introduced to the day’s met-con. 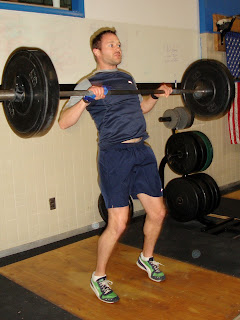 The med ball throws were a different take on the more traditional slam ball – in fact, you can roughly equate them to slam balls at the wall, instead of the floor. Standing roughly 5-7 feet away from the wall, throw the ball from an over head position so that it hits the wall at roughly eye-level and rebounds back. It wasn’t important that you were able to catch the ball, but rather that you kept your distance away from the wall. The focus here was on the explosive need to really hurl the ball against the wall. 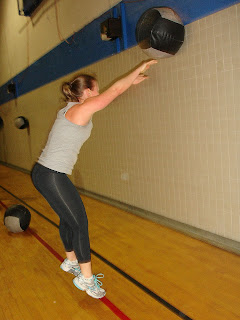 Jessi getting some serious launch on the med-ball

This is actually a great substitute for slam balls. When athletes tire during slam balls, natural instinct is to let the ball fall from from the overhead position rather than being thrown. With the overhead throw, so long as the athlete keeps their distance from the wall, the ball must necessarily be thrown with force in order to get enough rebound. Otherwise it will simply fall dead against the wall, requiring multiple back and forth trips to perform the exercise. 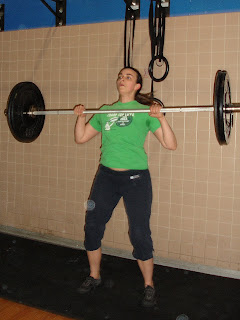 Nice work. Something a little different mixed with something a little difficult – maybe not difficult at the beginning, when 30 seconds seems awfully long, but perhaps by the end when 30seconds magically becomes awfully short. If you haven’t yet responded to the request for your max squat, please do so. If you haven’t been able to find a number, please respond and let us know – we can probably gauge a number for you, but need to know if that’s necessary. Look forward to seeing you all this Sunday.