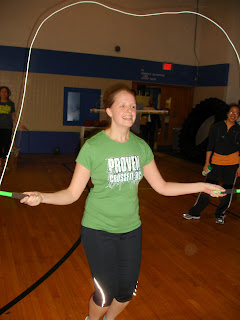 Check out Katie in her new duds! And a big smile to boot. For those of you who don’t know, Katie was recognized this past weekend for her unwavering support of all the Open athletes – she showed up each and every Saturday, stuck around until every heat was done, successfully running the time-clock while cheering everyone on, and, without fail, brought a different paleo baked good to share each time. Not to mention the fact that, since joining us in October of last year, she has tackled every challenge thrown at her with gusto, and worked relentlessly to improve herself. That’s the kind of camaraderie and dedication that defines a community. Thanks again, Katie, for everything! 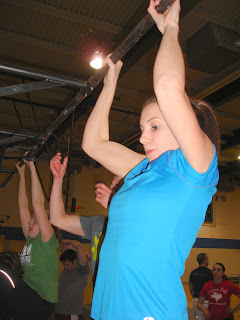 Everyone was encouraged to do as many strict pull-ups as possible, regardless of whether they could get less than 6 on the first set. If pull-ups weren’t in the cards, or when they finally gave out, the next step down the scale was negatives, but never more than 3 at a time. If the negatives weren’t working – i.e., dropping too fast – the final step down on the scale ladder was incline bar rows. Weight for the push-press was suggested as anywhere from 65-75% of an athlete’s max weight.

A quick note about form: while we often concentrate on pushing the weight up with our shoulders, don’t forget that once the weight is overhead, it’s imperative that we stabilize it. This requires the use of our entire body; pushing the head through the arms and driving the shoulders up towards the ears are essential, but that’s not enough. To really stabilize, we need to remember to tighten up the lower half of our bodies by squeezing our abs and glutes, thereby locking in our core. This creates a nice straight and stable mid-line from the barbell through the middle of our feet. 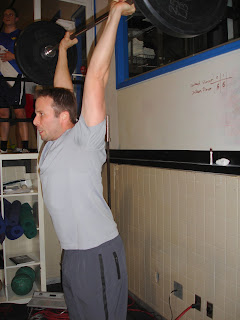 Here, you can see that John’s using active shoulders and has pushed his head through to ensure the weight is overhead, but because his abs and glutes aren’t engaged, his back is over-arched, creating empty space between the bar and his feet. 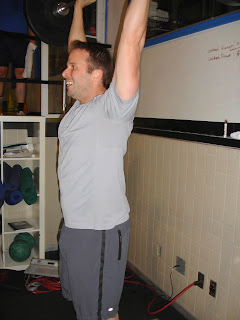 Two reps later, after a quick reminder, John’s still using active shoulders and pushing his head through, but he’s also engaged his core, creating a nice stable body position under the weight.  As it often goes with lifting, it doesn’t take a lot to make a big difference.  Kudos to John for listening and applying the cues within the same set!

The strength portion wasn’t done for time, although, similar to last week, athletes were encouraged to jump on a bar as soon as it became free, whether for pull-ups or push press. Once everyone had completed 4 rounds, out came the towels, plates and jump ropes. Should’ve seemed familiar… 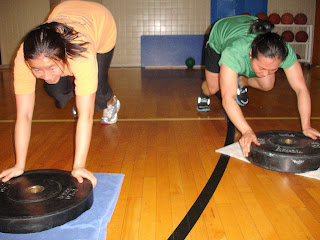 The last time this met-con showed up, it was a slightly lighter version with only a 1/2 court plate push, with guys pushing 45lbs and the ladies 25lbs. For the new and improved version, the distance was lengthened to a full court (broken into two 1/2ct lengths for the evening classes), while the weight was upped to 25kg for guys and 35lbs for the ladies (although I spied at least 3 ladies – Lauren Twohig, Julia, and Sara – using 25kg for the workout. Awesome!) In this manner, one partner performed the plate push while the other completed as many double unders as possible. Upon completing the plate push, the two partners switched positions. This back and forth continued until time as called. This version definitely allowed for more double unders, and it was awesome to see people really pushing themselves to get right back onto the ropes. 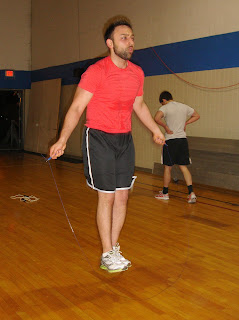 Also, recent information has come to light that we have, not one, but TWO Maryland State Olympic Weightlifting record holders in the gym.

Be sure to congratulate them both!!

And speaking of Olympic lifting, just a friendly reminder that the Cap City Open Olympic Weightlifting meet, to be held at Balance Kalorama in two weeks (Saturday, April 21). For those of you thinking of competing, there are only a few spots left. However, we also need more volunteers, so if you can spare a couple of hours, your assistance would be much appreciated (you can e-mail Chris or Mike, or simply leave a comment). At the very least, come out to cheer on the lifters!