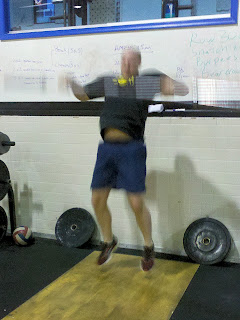 Things were awful springy in the gym on Thursday what with all the jumping and bouncing and heaving of weights.

For the seated box jump, start in a seated position where the tops of your thighs are at or just below parallel (a small box is usually your best bet, with plates used to adjust the height as needed).  To initiate the jump, lift your feet off the ground while rocking back slightly, and then quickly rock forward, slam your feet down, and explode off the box into a full vertical jump onto a higher box. Remember to land light, absorbing your landing with soft knees.

Done where the athlete performs one regular seated box jump, steps down, performs another seated box jump and then, instead of stepping down, completes a depth jump off the opposite side of the box.  Remember that the vertical jumps are about (A) jumping straight up into the air, rather than forward, and (B) about doing so as quickly as possible after your feet touch the ground once you’ve stepped off the box.  It’s the quick turn around from absorption into explosion that brings about the real benefits from depth jumps.

As above, except immediately upon landing after the depth jump, the athlete completes 3 unbroken broad jumps. This is to help drive home the need to absorb upon landing and using the tension gained from deceleration as a recoil for the following broad jump.

The explosive need of the seated box jumps has great carry over to the Olympic lifts, one of which – the snatch – was featured in Thursday’s met-con. 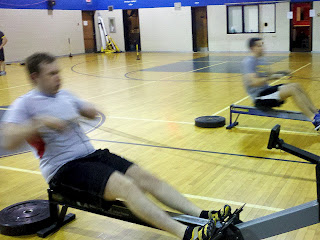 Owing to the size of the evenings classes, the workout was run in teams of 3 people. As such, the first partner rowed 300m and then jumped over to the bar to perform 12 power snatch. Only when the first partner had finished the snatches did the second partner start the row, thus avoiding a potential traffic jam at the bar while also providing a planned rest break (groups of two waited until the preceding partner finished the burpees). Snatches weight was agreed upon by the group, with suggested weights at 95m/65w.

The key to performing higher repetitions of either Olympic lift, especially when mixed with other exercises, is FORM. The “grip it -n- rip it” approach will only serve to deplete your power and strength faster, making it even harder to perform the movement correctly and efficiently. Regardless of whether you’re on rep 1 or rep 12, start with hips low, chest up, and back arched rather than rounded, ensuring the lats are pulled down and back (often times, rotating your elbows so they face backwards will help you achieve and retain this set-up). Stand up nice and tall with the weight, being sure to achieve full extension before shrugging and then pulling the bar up the body with your arms. 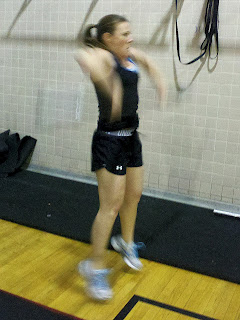 Although the bar is blurry, you can clearly see Jessi’s in a great extended position at the top of the second pull – hips extended, shoulders shrugged, and elbows high and outside in the “scarecrow” position so as to keep the bar nice and close to her body.

With the bar in close, snap it over head while jumping the feet into a stable squat position, pulling under the weight as much as needed to ensure a successful lift. Once the weight is overhead, stand all the way up before lowering the bar down for the next rep, being sure to reset the feet each time.

If anyone is looking to see pure Olympic lifting in action, be sure to join us next Saturday, April 21st, for the CapCity Open to be held right in here at Balance Kalorama. I know of at least two CFDCers who will be lifting (Sara and Reggie) and at least six who have agree to volunteer some of their time during the day, including Coach Mike Choi, who is the man responsible for setting up and running this years meet. If you’re interested in volunteering, or even just figuring out when would be a good time to come spectate, don’t hesitate to talk to Chris.

Also, one final note: We WILL be having class this Sunday, including both the 9am Elements and 10am regular class (Balance Gym will be closed to regular gym membership, but we will be holding class still). Hope to see as many of you as possible this weekend.