Sunday saw another large class as we proceeded with the second week of our squat cycle. Before anyone got to the squats though, everyone warmed-up with a few rounds of, er, hopping drills, as well as some…bouncing drills… OK, let’s face, we were trying to make you all jump around like a bunch of Easter Bunnies. There, it’s been admitted. However, we were also working to open up the hips and help warm-up the quads and hamstrings to allow for optimal depth and drive out of the squat. Seems like it worked. 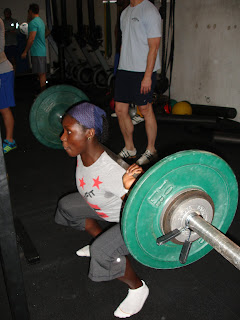 To prep for the working sets, warm-up sets were also programmed at 1 x 10 @ 30-35%, 1 x 8 @ ~50%, and 1 x 6 @ ~65%. This should’ve prepared everyone for the working sets of 3 x 6 @ 75%. Although 10% heavier than last week, this emphasis should still be on a nice smooth movement. The weight will be heavier, but if you find yourself grinding through the lift, or if you find a sticking point that really slows down the movement, assess what may be causing that (other than the weight). Common faults seen yesterday included: 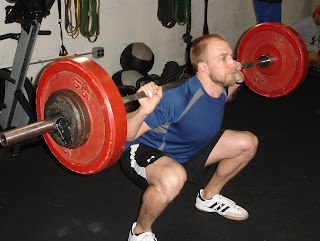 Adam not having any of the above mentioned troubles yesterday

Also, another point that was in the original notes that were handed out for the squat cycle, and was again brought up yesterday: this is a Team Effort. It’s extremely unlikely that you will ever be squatting solo during class, as the number of racks and size of class will demand groups. As such, be sure that you are involved in your groups effort. When others are lifting, watch them – are they squatting deep enough? are their knees caving in? are they collapsing under the weight? Tell them, and be sure someone’s telling you the same. This will become particularly important as we get into the higher weight ranges which will necessitate spotting. Also, coordinate your group by weight to be lifted, and make the plate changes efficiently – each of you know your numbers for the day, and so you should be able to arrange your group so the weight on the bar goes up with each lifter until you’re back to the beginning. This will ensure everyone’s moving safely, efficiently, and to the required standards. 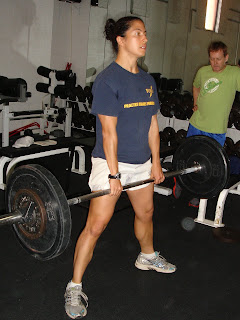 Working in groups, use a weight that is roughly 50-60% of your 1RM. The focus for speed pulls is on making every rep as fast as possible, not on moving heavy weight as fast as you can (it’s subtle, but easy to spot). You should be able to set up to the bar, set-up, and then squeeze the bar off the floor, exploding upwards into the upright and extended position. Don’t forget however, that this must still be a controlled movement. 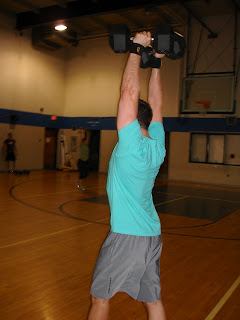 With basketball cancelled, and the gym to ourselves, Sunday’s met-con was done down on the court. Everyone grabbed a pair of dumbbells or kettlebells and lined up along the sideline of the basketball court. Everyone was given 10 minutes to complete 5 rounds of 5 burpees plus 1 shuttle run (half-way & back, full & back, half-way & back), and then, in whatever time remained, complete as many trips back and forth across the court as possible keeping the DBs/KBs locked out in the overhead position. Tough to do when you’re short on breath, as the abs and glutes must be engaged and elbows fully extended in order to maintain good alignment.

Great work as usual. To have another big class on a holiday weekend was a pleasant surprise. Speaking of which, hope everyone had an enjoyable Easter/Passover weekend. We’ll see you all on Tuesday.