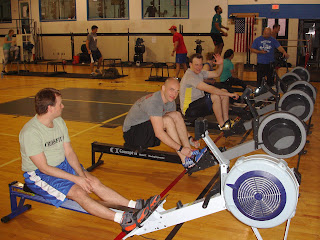 With no conditioning workout on Tuesday, you probably should’ve envisioned, or at least expected, something like Thursday’s conditioning-only workout.

Classes were set-up in heats of no more than 6 athletes at a time, mostly due the limited amount of rowers. Following the 1K row, athletes exited the back door of the gym for the 1K run, which was done as a Block run plus a Church run (so out the back door of the gym, all the way around the block, but then past the back door and in through the front door). Once in the door, athletes were to complete 50 box jumps. Heights were up to the athlete, but the programming called for jump-up, step-down only (stepping up was fine as well, so long as the athlete stepped down). From there, it was a mere 50 KB Swings to the finish. 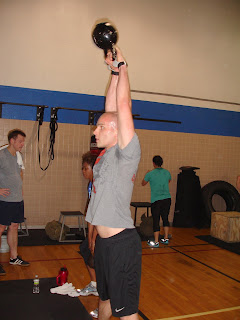 Swings were programmed as overhead (American), although anyone uncomfortable with the KB in the overhead position could switch to eye-level (Russian). However, regardless of how high you swing the KB, the hip movement is identical used to impart momentum is identical: shins vertical (or nearly vertical) with the hips driven back, loading up the hamstrings and glutes, while the back remains arched and the shoulders are kept pulled back and down (scapular retraction): 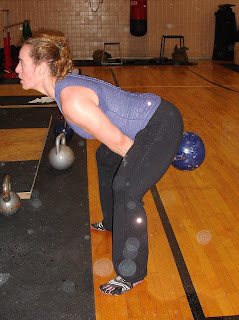 Sara, during her last set of swings, still nailing the form on the KB swings

In an earlier blogpost discussing the KB swing, we discussed the required shoulder positioning at the bottom of the swing, as well as the maintaining core control when the KB is overhead (“You guys are so unhip it’s a wonder your bums don’t fall off“) However, what we didn’t cover, or rather didn’t compare, is the difference between correct loading of the hamstrings and glutes during the bottom part of swing, and incorrectly loading the quads. Think a deadlift position (correct) versus a squat position (incorrect): 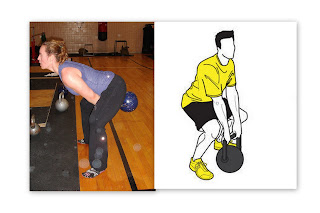 There’s good reason that the first step in learning the KB swing is a kettlebell sumo deadlift. Really, the KB swing and the deadlift are very much a “same-but-different” movement; The hip hinge in the deadlift and the kettlebell swing are identical, and perfecting your swings will have significant carry over to dialing in your DL technique. Of course, you could always prescribe to the Jillian Michaels school of KB swings… 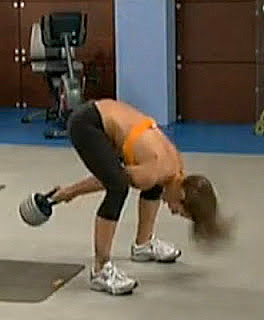 …in which case you’ll be mocked unmercifully before being put out of your misery by a KB to the head.

Immediately post-completion of the workout, everyone was directed to jump back on the rower for 3 minutes of a nice easy row to help cool down, flushing the lactic acid and slowly bringing the heart rate back down.  Additionally, before anyone was released, each class stretched out the calves and achilles, as well as the lower backs.  Results for the evening classes (the math is a result of running the evening classes in multiple heats, so your actual time to completion is the far right number): 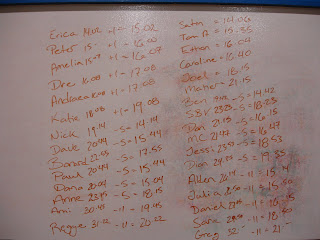 Good luck to those competing this weekend at the Mid-Atlantic Affiliate Team Challenge at CrossFit BWI, including Sara, Dre, Julia, Sebastian/SBV, Salty/Chris, and the mysterious 6th Fingered Man.

Just FYI, there WILL BE class on Sunday as the regularly scheduled time; however, there WON’T BE an Elements class this Sunday at 9Am. And yes, the 10AM class will still be covering the last day of the first squat mini-cycle.