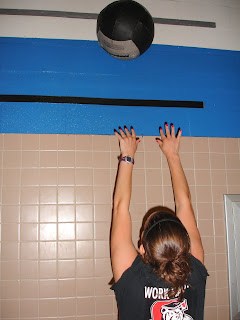 The CrossFit for Hope workout is a CFHQ sponsored fundraiser which will replace the FGB workout this year, and Brian Wilson of Patriot CF is leading the charge to make DC’s inaugural run at the Hope workout a little more high profile. Here are the general details:

And FYI, the CrossFit for Hope webpage is up – you can click on the pic above or HERE (details about the workout on the webpage!).

As for our FGB-ish time-domained workout Thursday, it went a little like this:

Everyone was divvied up into groups of 2 or 3 people, with groups using a follow-the-leader style approach (meaning that everyone did the workout in the exact order listed, so one person would start with the wall balls, and only when they moved on to the burpees would the next person start their wall balls). 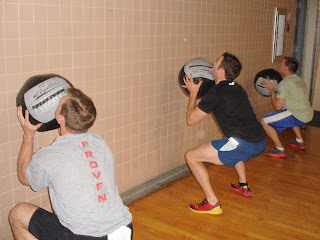 Think of the wall ball as the final step in the explosive front squat progression: Yes, it requires good front squat form, with an upright torso, weight in the heels and knees driven out; Yes, it requires the explosive drive of the thruster, using the momentum of the body to drive the ball up to the target; NO, it does not start by throwing the ball at the wall! You wouldn’t start your thruster by first doing a push press and then sinking into the bottom of the squat, would you? Wall balls start by picking the ball up, dropping into a full squat, and then launching the ball at the target. Start with the squat, squat below parallel, throw the ball over the line, repeat. 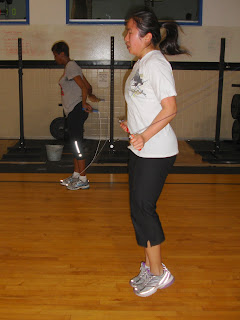 Burpees are burpees, and the real trick to them with this workout was dropping into the first one as fast as you could after coming off the wall balls. The longer you waited to start them, the worse they seemed to be. DU’s were also DU’s, except when they weren’t DU’s. The goal of the workout was constant movement during the exercise, so this wasn’t the time to practice DU’s. If an athlete could consistently hit 10 or more DU’s in a row, then they were to do DU’s during the workout. If an athlete is only averaging less than 5 DU’s in a row, then they were to do single skips during the workout. 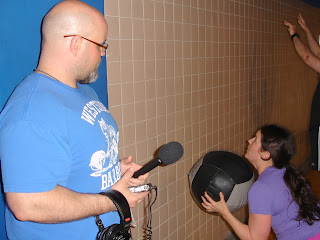 Emily taking on wall balls while under the watchful eye,
and sensitive microphone, of Coach Tom Brose

Great work, and thanks to everyone for being so kind Emily and taking the time to chat with her and share your view on CF and CFDC. Emily is doing a story for WAMU/88.5FM, and the sound recording equipment was in full effect last night. We’ll be sure to let you all know when it will air.

Finally, as many of you have noticed, programming for Tuesdays and Thursdays is taking a slight detour from the norm. From now until mid-June (June 16th, to be exact), the program for the morning classes will be different from the program for the evening classes. For those of you who like to check out what we’re doing ahead of time (NOT that any of you would cherry pick…), we’re going to try and have both workouts posted on the CFDupont website. Apologies for the confusion.

Hope to see a lot of you on Saturday at the Cap City Open – Coach Sara is scheduled to lift between 11:30am and 1:30pm, and Reggie is scheduled to lift between 4 and 6pm; however, there are a number of CF Dupont athletes lifting through out the day, and if you want to watch some real fireworks, Rick Bucinell is a seasoned heavyweight Oly lifter who’s opening Snatch will be 130kg (286lbs)! If not Saturday, we’ll see you all on Sunday – no squats this Sunday, but plenty of work geared toward making all of us stronger for the next mini-cycle starting on May 12th!