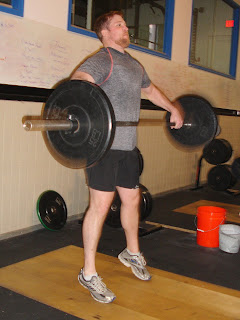 After a relatively simple and straightforward Tuesday program, class took a turn for the complex on Thursday. A snatch complex to be more specific. However, before anyone even got to the Snatch complex, we reviewed an essential piece of the Snatch (as well as the Clean), and that’s the starting position and 1st pull.

You see, earlier this month we did a met-con involving power snatches (“FEELS LIKE SPRING TIME“), and we noticed that the vast majority of people, while working hard to get an explosive 2nd pull, while not pulling early with their arms, were essentially negating all of that work with some horrendous set-ups and sloppy 1st pulls. It’s doubtful this was intentional, but you cannot start with something sloppy or out of place and then expect what follows to be efficient and well executed. To end well, you must start well. As such, we took a few moments at the beginning of class on Tuesday to review set-up for the snatch, as well as the 1st pull (1st pull = lifting the bar from the floor to the tops of your knees).

For those of you willing to put in the time, I would highly, HIGHLY recommend that you read Greg Everett’s free on-line article on this subject entitled The Olympic Lift Starting Position from February of 2009. However, here’s a brief distillation of a few points made in Everett’s article and which were harped on Thursday in class:

(1) The set-up position for the Snatch/Clean – with the hips low and the chest up – is NOT the same as a deadlift, simply because the neither the Snatch nor Clean are Deadlifts (profound, I realize); 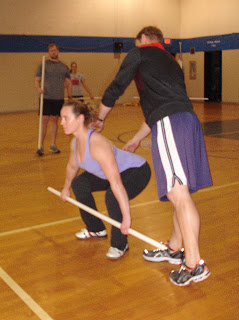 Sara demoing solid starting position, with her hips down, chest up, knees out, and arms straight.

(2) The hips and shoulders rise at the same rate during the 1st pull while the knees are pulled back slightly so that shins are vertical to the floor by the time the bar reaches your knees. This, as opposed to letting the hips rise faster than the shoulders, which would make the lift a deadlift, which we have resolutely determined is NOT the lift we’re working on – see point (1) above for reinforcement of this. 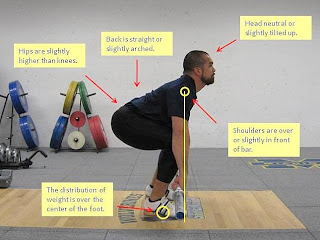 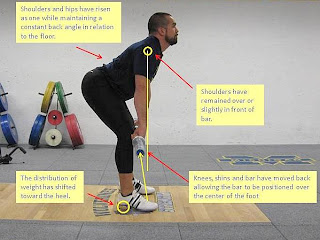 Many thanks to Michael Favre, M.Ed, from the Univ. of Michigan and his article entitled “The First Pull” for the above pictures (you can click on the pictures to see larger versions with more legible text boxes)

By pushing into the floor and ensuring the hips and shoulders rise at the same rate, your ensure that your body is well positioned for an efficient and explosive 2nd pull. I think Everett says it best in his article when he writes “(t)he first pull serves only to optimize the second,” and thus, by extension, “the starting position serves to allow that second-pull-optimizing first pull.”

Make no mistake, lots more could be said on this subject, but those were the points emphasized on Thursday. After reviewing both the start position and 1st pull with PVC, everyone divvied themselves up to work through the nights Snatch complex.

Strength/Skill:
6 x Snatch Complex
Each snatch complex consisted of 1 Pwr Snatch + 1 Hang Squat Snatch + 2 OHS.  Everyone was highly encouraged to pause at the bottom of each OHS for at least a 1-count, if not 2-count, to work on stabilizing in the receiving position of a full squat snatch. Weight could be increased across all sets, but without going to failure; for those with a 1RM, the suggested weight limiter was approximately 70% of the 1RM. This would ensure a moderate amount of resistance while still allowing people to concentrate on their form and produce crisp, efficient movements. 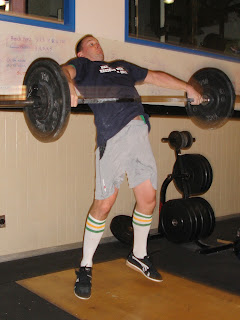 For those who are still relatively new to the snatch, or just not quite comfortable enough for the complex, we worked a Burgener-esque type complex consisting of 1 Hang Shrug + 1 Hang High Pull + 1 Hang Power Snatch + 1 OHS. If ever you find yourself struggling during a snatch workout (pulling early, not fully extending the hips, etc.), this is a great succession of movements to remind your body of the proper sequencing. Work through this series once or twice at light weight, and then go back to your lifts, and see if that doesn’t make a big difference. 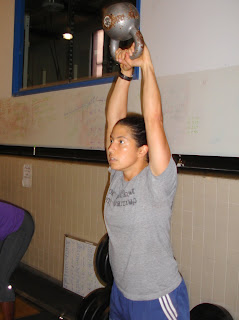 This was basically a two part met-con, with the first comprised of 4min of KB ladder, where P1 does two swings, then P2 does 2 swings, then P1 does 4, then P2 does 4, and so on and so on as high as possible in 4 minutes. At the end of 4 minutes, whichever partner was not swinging the KB immediately started on 10 burpees, and on the 10th burpee, performed a 50′ bear crawl. Once 50′ had been covered, the second partner performed their 10 burpees and then a 50′ bear crawl. Partners worked down the bear crawl ladder (10-8-6-4-2) until done.

Great work all around – awesome to see so many people working really hard to incorporate the adjustments into their set-up and 1st pulls. Now then, not that you haven’t wasted enough time at work reading through today’s blog entry and formulating your witty and poignant comments, but you probably want to give yourself another 5 & 1/2 minutes to check out NPR’s story on CrossFit & CFDC airing today:

To give you some background, we were lucky enough to have Emily Friedman of NPR’s Metro Connection stop by for a workout last week (“OFF THE WALL“). Emily was putting together a story on the rising popularity of CrossFit as a fitness regimen, and that story airs on WAMU/88.5FM today (Friday) from 1-2pm and then again tomorrow (Saturday) from 7-8am. You can also download the iTunes podcast (search “Metro Connection”), listen on Stitcher, or the NPR app. In fact, as of 10:30am this morning, the segment was already loaded on the NPR website, and you can listen to it by clicking the link above (the play button is just above the initial picture.

Also, don’t forget about the Run for Shelter 10K this Saturday down in Old Town. Race get’s underway at 8AM, and there will be a band at the finish line. If you’re not registered but want to, they will be conducting registration on site Saturday morning.

Lastly, a heads up regarding a Kipping Pull-Up Focused Elements this Sunday: we’ve been working a pretty detailed rotation of upper body work once a week on Tuesdays with the goal of getting people stronger (really, when aren’t we doing that?), but more specifically, producing more pull-ups. We will slowly add in some more dedicated work towards this goal, but a big piece of the pull-up pie is of course ‘kipping pull-ups.’ To help build up the kipping technique, this Sunday’s Elements (9-10am) will focus primarily on perfecting the kip and then applying it to pull-ups. We will be working upstairs, so you’ll have plenty of room. I would highly encourage anyone still struggling with kipping or pull-ups to wake up just a little bit earlier on Sunday and join us.