Apologies for the epically late post – and to boot, there aren’t many photos to share this time around, but there is a video, so that’s got to count for something.

This past Sunday was the last in our 3-week “off-squat, hamstring-focus” strength-work, focusing on a CFDC strength-favorite in the RDL, followed by some pistol squat skill work and then a nice lung-burner of a met-con down on the court. Next week will mark the start of the second 3-week squat mini-cycle, so make sure those squat-engines are primed and ready! 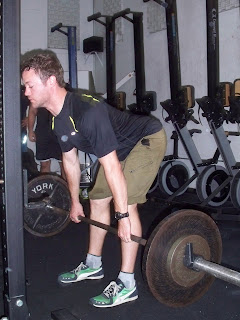 The basic parameters for the RDLs was that athletes could work up to any weight, but all lifts had to be done with an overhand grip. This acted as a self limiter, allowing people to focus on form and depth, rather than using a mixed-grip and fighting through bad form in the name of bigger numbers.

The guideline was to complete roughly 3 rounds of between 5 to 10 Pistols per side. Pistols were scaled down to ring assisted (one or two hands holding on to a ring for balance and assistance), or scaled up to include weighted pistols with a single KB racked on the working-leg side.

Working in pairs, with only one person going at a time, complete as many rounds as possible in 10 minutes of one 50-foot bear crawl, 5 burpees, and then a 50-foot sprint back to the waiting partner. Sadly, the camera didn’t really capture too much of the action on Sunday during class, and although basketball came in and took over the court not too long after class wrapped up, Stephanie and Erica were kind enough to cheer-on, and videotape, Tom, Chris and Sara as they worked through a modified version of the met-con:

Don’t forget to sign up for the Mid-Atlantic CrossFit Affiliates for Hope workout on June 9th! Jump back to last Wednesday’s blog-post (“PRESSED INTO SERVICE“) for the particulars and information.

Also, if you happen to see Coach Mike Choi around the gym this week, be sure to congratulate him on a stellar performance at the East Coast Classic Olympic meet this past weekend. Mike went 6 for 6 on his lifts with 4 (FOUR!) PR’s, including an 87kg snatch, a 112kg clean and jerk, and a 199kg total. Well done.