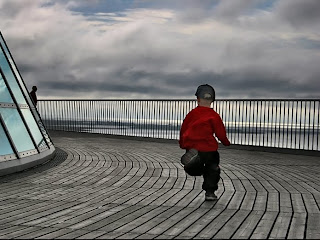 Great weather and considerable amount of time since any sort of form-running review meant that Thursday’s class would feature some running, some more running, and, since we were running, why not some overhead squats?

Last September (“GONE IN 120 SECONDS“), we worked running-form by using partners as resistance – one partner stood in front of the other, and the second partner leaned into the first, and then ran down the floor pushing against their partner. Thursday’s skill work was similar in both nature and goal: use your partner’s resistance to build and emphasize a good forward lean of the body. The lean creates an optimal body angle for our running: bending at the ankles, instead of the waist, allows us to use gravity to pull us forward while reducing stress on our backs. However, this is only a part of it – the lean must be accompanied by good mechanics in the stride. In other words, if we don’t accompany an efficient position with efficient motion, than we’ve negated the benefits of that position. What’s meant by efficient motion? Pulling the feet up in line with the legs and landing on the balls of the feet. Driving the knees forward, instead of kicking the feet our behind you. Pumping the arms in time with the legs, and keeping the elbows (bent at roughly 90 degree) in close to the body. Chest up, but head neutral, not craned up or looking down at the feet. 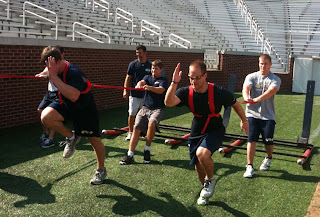 To help ensure efficient position, we used the bands as more of a harness, using two bands, one around each of the runners shoulders. Similar to having a partner pushing against your chest, this places the resistance against our upper body, allowing us to lean into it. Often you’ll see resistance bands used where they’re wrapped around the runners waist – inevitably, this causes the runner to break at the waist, creating exactly the position we’re trying to avoid.

Also, since we’re all about adding awesome photos grabbed off the internet, the FitStream company has some resistance bands they tout can be used for resistance running, which, apparently, looks something like this:

Why, yes, I would like to look like I’m the Hunchback of Notre Dame pulling a dray, can I please order two of those? And while I’m at it, I don’t suppose you have an extra copy of Jillian Michael’s Kettlebell DVD would you?
Team Met-Con:
20min AMRAP of
250m Run, Max Rep OHS, 12 Renegade Rows

The met-con was set-up as a run-dependent-time-interval-sort-of-deal. At least, that’s the best we could to describe it in one sentence. Basically, the first partner headed out for the 250m run while the other two partners stayed behind. Once P1 returned, P2 headed out on the run while P1 performed as many OHS (overhead squats) as possible before P2 returned – P3 was still hanging out. Once P2 returned from the run, P3 headed out for their run, P2 performed max rep OHS, and P1 quickly performed 12 renegade rows (6/side), and then used whatever time was left before P3 returned from the run as rest. Things continued in this manner for 20min, with most groups getting in at least 5 full rounds per partner. Weight for the OHS were up to the groups, although suggested weights were 45, 65, or 95lbs. Score was total reps of the OHS.

The key to a workout like this is core-control; the ability to adequately gain control of your breathing and tighten up your core simultaneously is a very powerful, yet often overlooked, component in many of our workouts. The run-OHS combo will really bring the point home though, and adding in the renegade rows (more core work) only serves the drive the nail deeper. Although we’ve posted it before, I really like the following description from Sage Burgener regarding the OHS, especially the part about supporting the weight with your body: 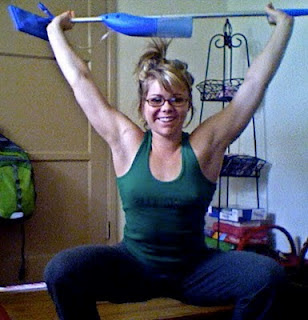 “If you can hold a barbell overhead with heavy weight on it, comfortably, then you are on the right track. Its all about holding it with your body. Let me repeat that so I can make this more dramatic.. ITS ALL ABOUT HOLDING IT WITH YOUR BODY. Too many times we try to manipulate that bar overhead with our arms. We think that all those curls for the girls will finally pay off and we start relying on “muscling” that bar into place. If you do that, you will fail miserably and may possibly become a worse person. The key is to find the right place overhead (typically right behind the ears), and hold it there without letting the bar move ONE millimeter. You want to feel your traps, your lats, EVERYTHING pushing straight up on the bar. You need to be in control of the bar, do not let the bar be in control of you (deep…i know…)”

OHS-words to live by. And yes, that’s a pic of Sage above the quote, overhead squatting what I believe is a Swiffer Wet Jet.

Remember, this Sunday marks our return to the squat cycle: we’ll be starting in on the second 3-week mini-cycle, so be sure to bring your squatting legs with you. Also, on the heels of a few people’s comments regarding the unnatural feel of push-jerks this past Tuesday, this coming Sunday’s Elements class will, appropriately enough, be focusing on the Push-Press & Push/Split-Jerk. See you all this weekend.