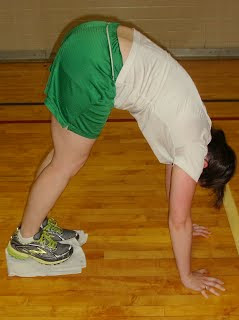 After a long and raucous Sunday class, including some severe lower body beat down, Tuesday’s class turned its collective attention back to the upper body, along with a short met-con involving an brand-new amalgamation of two CFDC “favorites”. 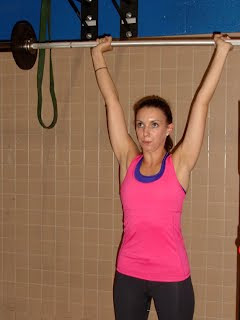 The double strength portion of Tuesday’s class is actually a repeat from the beginning of May (“PRESSED INTO SERVICE“), with the same rep scheme of strict presses followed by one set of AMRAP push-press. For one, this should’ve given athletes both a goal to surpass (the weight and reps achieved in the earlier class), but also provides great insight to which athletes are incorporating the coaching instructions. 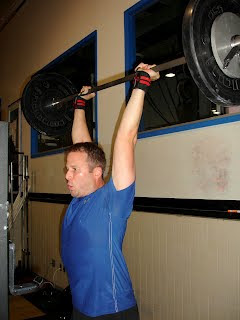 For example, in the post accompanying the previous iteration of this workout, we made a big deal about working to stabilize the lower body during the press, including a nice before and after photo of Paul incorporating the tight abs and glutes engaged position. Walking around Tuesday showed that a large number of people have been paying attention, as positioning was much improved. Work to achieve the form, and the strength and numbers will come. 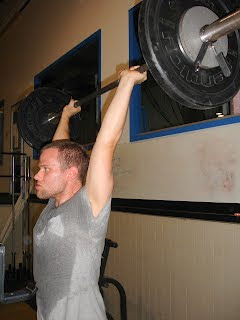 Similar to last time, following completion of the strict press sets, everyone was to complete one set of AMRAP push-press at one of the following weights: 45lbs, 65lbs, 95lbs, 115lbs, or 135lbs. The addition of 135 was a change from last time, but, in reality, we need to start including an 80lb option, as there are some for whom 65# is just a little too light, but who’s reps would suffer mightily under-going the thirty pound jump up to 95#. Consider it done.

Met-Con:
8min AMRAP of 5 Mummy Pikes and 10 Side Hurdles 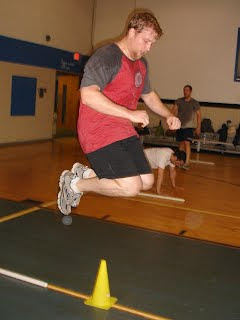 One side hurdle was equal to over and back (or 2 jumps), and could be done using one of three sizes of the green hurdles, a pvc laid on the floor, or simply a line painted on the basketball court – although an extra large 7pm class also saw side hurdles being done over a cone, a loaded barbell, and a tire! However, side hurdles are old hat by this point. It was the introduction of the Mummy Pikes that made this met-con an experience. 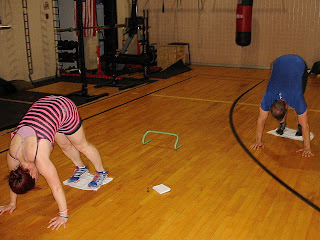 Mummy Pikes are an amalgamation between inch-worms and mummy-crawls, which renders a “sort-of inch worm with your feet on towels and your hands don’t move” type of movement. Begin as you would a mummy-crawl, in the extended plank-position with both feet on a towel. Keeping the hands in place and knees locked, tuck your pelvis forward so that you bend at the waist, and then begin sliding your feet towards your hands, so that your hips extend higher into the air. Slide your feet up as close to your hands as your flexibility will allow, and then push back out into the plank position. Be sure to maintain the hollow position in the plank position – don’t allow the hips to sag towards the floor, or the shoulders to pinch in and the back to over-arch.

Good thing it wasn’t too warm in the gym Tuesday – and, I am of course, being facetious. Remember, the hot, humid days of summer are here, and so the most important part of class is the part you take care of well before you even show up: drinking water (lots and lots of it). Continue taking in that fluid, and we’ll see you all on Thursday.