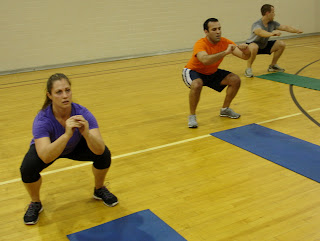 Seriously, a class in which no equipment is used? Is that even possible? Apparently, it is. Tuesday was an onslaught of all body weight exercises, including pull-ups, push-ups, handstands and HSPU, and a few squats. If nothing else, it sure made clean up a lot easier. 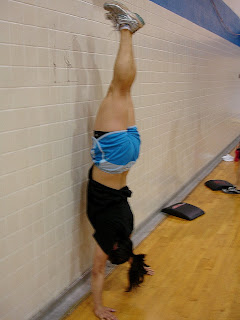 After a quick run-down on the handstand progression for the evening, class got to work alternating between AMRAP pull-ups and handstands. Pull-Ups were to be strict, with scaling options including negatives or supine rows on the parallettes (no band assistance, that would’ve meant getting equipment out…).

As for the handstand progression, everyone was to work through the following, starting at the same place, and then working as far through the progression as possible – in other words, if you were unable to do the next step of the progression, then you would stick at the previous step. Scaling options were included for many of the rungs, which made Tom’s flow chart look like a family tree of handstand work (will try to get picture today) 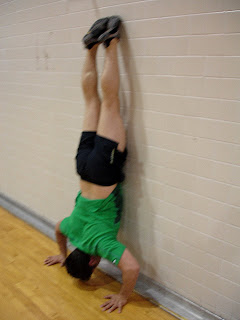 For both the pull-ups and handstand works, people were limited to no more than 3 negatives at a time, or 20 total for the workout. Negatives can have a serious impact on your muscles, and while enormously helpful, when done in too great a volume, they can become deleterious. 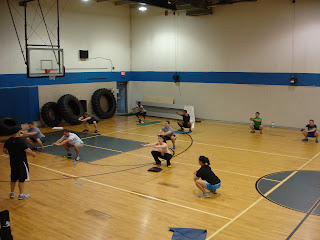 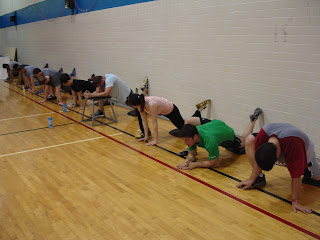 Awesome work. Promise they’ll be some barbells used in Thursday’s class, so you all can be sure to get your fix in. Also, please check Sunday’s post for information on the Mid-Atlantic CrossFit for Hope workout taking place this Saturday outside at John Marshall Park.

Also, while you’re busy reading the blog and not working (and really, there’s nothing wrong with that), click on over to the blog Starr Struck to read Mary Catherine’s awesome take on “Why {She} CrossFits.”