This past weekend was a packed one, with CrossFit for Hope on Saturday, and another CFDC class on Sunday with 25+ people in attendance. It’s safe to say that both were all-around successes. 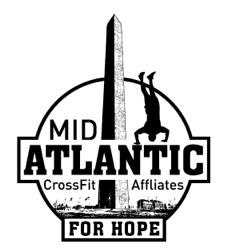 The Mid-Atlantic Crossfit for Hope workout was an all-around amazing experience, with over 400 athletes from 40 different area affiliates gathered on the mall at Mitchell Park for the workout. Representatives from CFHQ even came out to show support, including Coach Glassman and a bunch of top games competitors. However, the true focus of the Hope workout, and the reason that some many came together to share the experience, was about the CrossFit community and it’s continuing service to others. Worldwide, more than $1.2 million has already been raised in the name of St. Jude Children’s Hospital – just FYI, though, it’s not too late to donate! (you can still contribute via CFDC HERE)

CFDC was represented well by a crew of regulars, as well as two first-timers in Katie and Jessi. Seeing them push themselves to their limit in a new (and blazingly hot) setting, and watching the smiles creep in as they realized what they had done, was incredible. In addition, with a little last minute finagling, CFDC was able to work Erica in the workout as well, and she did an amazing job as a last minute competitor with Ben scoring her and cheering her on. Ethan, Reggie, Sara, Mark and his brother Mike, all braved the heat and brutal workout, and did an equally amazing job of supporting their fellow competitors and athletes. In total, the inaugural Hope Workout was amazing experience and an incredibly well run event – huge thanks to Brian Wilson and his crew of volunteers who worked for months to make this happen.

For some added perspective on things, all of you should definitely check take the time to read the following from our friend Alex Lofgren, aka “The Red Viking,” you should all read for some awesome post-Hope perspective on what CrossFit is and why we do it: CrossFit Hawk Blogpost 10 _ May -2012. 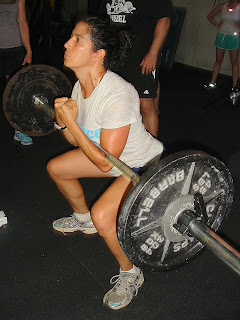 Zercher’s are a great supplement to deadlift and squat training, helping hammer good posture while working the glutes and hamstrings, abs and back all in one shot. However, they do take a little getting used to. To perform the Zercher squat, begin with a barbell in a rack at about stomach height (above the navel, but below the sternum). Loop your arms under the bar so that it’s resting in the crooks of your elbows, with elbows about shoulder width apart and knuckles pointed up towards the ceiling. Take a deep breath into your abdomen, and lift the bar out of the rack. Assume your squat stance (you may want your feet slightly wider than normal to ensure that the elbows don’t drive into the tops of your thighs), and really press your abs into the bar. Concentrate on driving the knees out and push the hips back as your descend, squatting down until parallel or slightly below (if you can, try to get the bar to touch the top of the thighs). To stand, keep your back tight and push the fists towards the ceiling while driving the hips forward. 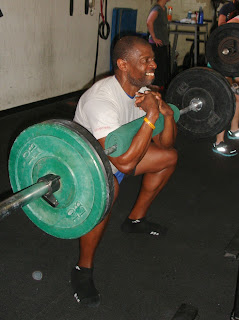 A common question floating around the gym on Sunday was “what percentage of a front squat or back squat should be used?” As coaches, this is awesome to hear as a few months ago, it would’ve been rare that anyone would think of it that way, let alone know their numbers well enough to consider using such an approach. Of course, the irony is that we weren’t basing the Zercher squats off any specific numbers, but rather going for a maximal effort for the day. This is where our approach borrows from the Westside Barbell idea of rotating specialty exercises into our workouts and taking them to that “Max Effort” (ME). While Sunday’s Zercher work might not have been a true ME day (working up to a 1-3 RM), the benefit was realized in by our collective ability to take a random exercise and use it as our heavy lift. 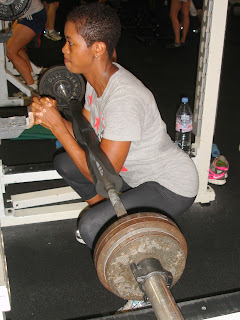 While the squat cycle has focused on working off a percentage-based progression, our interim work has included exercises, like RDLs and Zerchers, which are simply done under the guidelines of going “heavy” while keeping good form. These interim exercises compliment our “big” lifts by still hitting the major muscles, as well as challenging the core and exposing weaknesses which we might’ve found a way to hide during the familiar lifts (squats, DLs, etc). In other words, it’s extremely beneficial to work based off percentages, but it can also be just as advantageous to “Go Heavy.” The trick is to know when to do which.

Options for the SLFT included body-weight, adding weight by holding a dumbbell, or adding weight with a barbell (an advanced option was to complete the movement while standing on plate or box in order to increase the range of motion). The only requirement for Sunday’s SLFTs was that athletes had to touch the floor with both hands, or hold the weights with both hands. 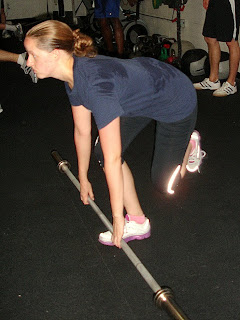 This is particularly important when performing the movement with a dumbbell, as the tendancy when holding the weight in one hand is to tilt sideways, reaching the weighted arm towards the floor. Requiring people to hold the weight with both hands meant that everyone had to work to remain level, keeping good posture. For more on performing SLFTs, check out our blog post from this past January (LEAPIN’ LIZARDS) for a great run-down on performing the SLFT (also called a single leg deadlift). 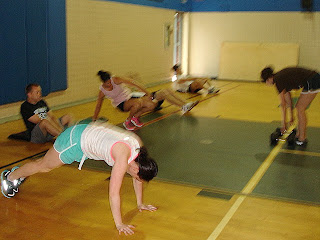 To finish things off, everyone headed down to the court of a ten minute team met-con. One team member set-up on one end of the court with an ab-mat for sit-ups, another set-up on the other end for plank-to-squats, while the third stood near the plank-to-squat teammates and prepared to walk from one end of the court to the other carrying dumbbells/kettlebells that the team had chosen to use for their farmer’s walk. Once the person doing the farmer’s walk reached the one doing the sit-ups, the switched,and once the person now doing the farmers walk reached the one doing the plank-to-squats, they switched. Teams continued to rotate in this fashion through-out the 10min for as many total rounds and reps as possible.

As everyone stretched out post-workout, the news was broken that one of our own would be leaving us for a little while. 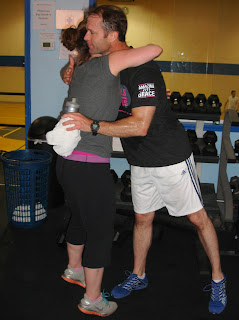 If you haven’t seen Brendan much over the past couple of weeks, that’s because he’s been off training, getting ready for a 2 month work assignment in Afghanistan. We were lucky enough to have Brendan stop in on Sunday for one last workout before he takes off. Please, please join us in wishing him the best of a luck and a safe and speedy return. We’re looking forward to having you back in the Fall, Brendan!