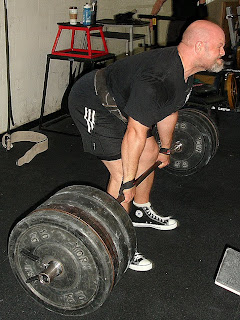 A throw-back to the old days of CFDC, with a small class for a Father’s Day workout. The plus side, for the coaches at least, was that it gave us a chance to jump back into the fray and work-out with class. 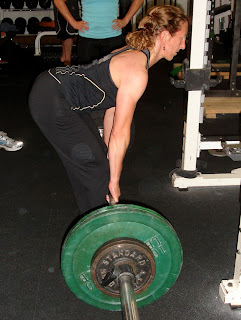 We’ve now hit RDLs 3 times during our squat cycle. The first time (“MY LEGS ACTUALLY FEEL GOO…..“), we used barbells, but required everyone to use an overhand grip at all times and without straps. This forced everyone to work at sub-max weights while concentrating on form, really accentuating the stretch in the hamstrings. The second time (“FIELD TRIP!“), we used dumbbells, pushing the weight a little, but allowing straps if needed. The DBs also forced people to concentrate on technique, but with the focus being on the back and shoulders, since the DBs have a tendency to really pull the shoulders out of position first. 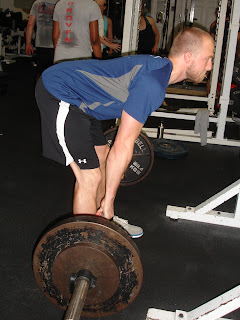 For this Sunday – the last Sunday in our second, and final, 3-week off-squat wave – we re-introduced the barbells for the RDLs, but allowed people to use straps and really push the overall weight. Sets were done in repeating rep patter, with two sets done at 8 reps, two sets at 5 reps, and a final two sets at 3 reps. The attention to form has really paid off, as people were moving a lot of weight with really good form. Should be a lot of toasty hamstrings out there today in CFDC-land. Following completion of the RDL sets, the bars were stripped, and the hooks moved up to shoulder height for the days accessory work: weighted step-ups.

Owing to the smaller class size, Sunday’s version of the weighted step-ups were done with barbells instead of DBs. Step-ups with barbells really up the sense of instability in the movement, and thus require greater focus on maintaining good body posture through-out the movement. Class worked through three sets of increasing weight and decreasing reps, starting with 5 reps per leg, then 4, and finally 3. 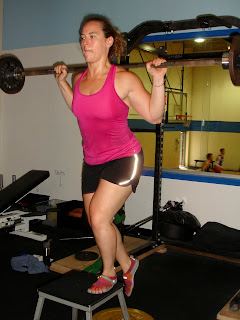 The height of the box you use should allow you to step up while maintaining a 90 degree or greater angle in your knee joint. Anything less than 90 will place excess stress on the joint, and more often than not, will negate the benefits of the movement by causing you to heave or pitch as you stand up. Additionally, you want to make sure your foot is pointed forward when on top of the box, and that you’re placing and removing the foot on the box in a linear fashion (in other words, make sure you aren’t swinging the foot out to the side to place it on the box or step down). 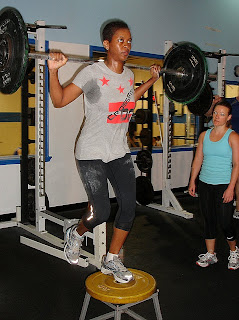 Once you’re leading foot is on the box, drive the heel into the box and extend the hip and knee. You should come to a full standing position on the top of the box before bringing the other leg up to stabilize. Avoid extending the leg half-way and then quickly bringing the other leg up to assist in standing up the rest of the way. Finally, be nice to your joints, and be sure to come down in a controlled manner. Just like with box jumps, broad jumps, etc., absorb the landing rather than crashing down on to your feet. 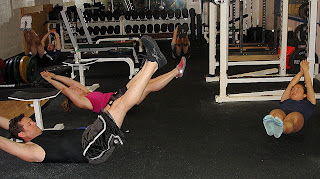 With the majority of class spent on the strength movements, the finishing touch was a nice dose of core work. Class broke out into pairs, with one partner balanced between two benches to start things off, and the other adding weight and watching the clock. 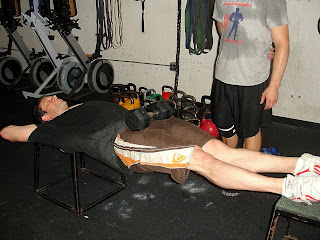 The Glute-Ham Bridge is the static off-shoot of a hip extension. With the hip extension, you place your heels on one bench, your shoulders on another, and then raise and lower your hips from the ground to a level position by squeezing your glutes. The GH Bridge uses the same set-up, but instead of raising and lowering your hips, you’re constantly engaging your glutes (as well as your abs) in order to maintain a plank position between the two benches. Adding weight produces more resistance – a plate is a good place to start, but a DB will reduce the surface area of the weight, focusing the weight right on the hip joint and making the movement that much harder. Other options exist, and the resistance band was a nice touch, although… 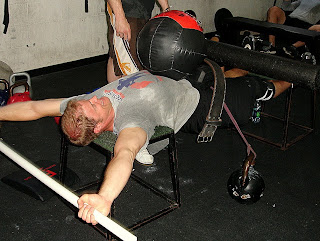 …can’t really say the same for the med-ball, the weight belt, the foam roller, the clamps, and the piece of PVC.
Once each partner had completed the GH Bridge, both then went for a max time Hollow Hold, with everyone running through the progression two times.

Awesome work, and on behalf of your coaches, thanks for letting us workout with you all, it was a blast! Remember, next Sunday starts the final wave of our squat cycle, which means we will be getting back to squatting!

Also, just want to re-wish a Happy Father’s day to all the dad’s out there. Hope everyone had a restful remainder of their weekend. We’ll see you on Tuesday.