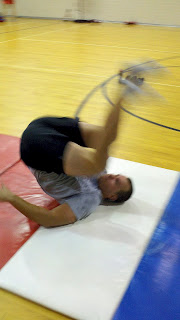 Tuesday brought a little break from the norm, with class splitting into two groups to practice some gymnastic skills. While handstand progressions and HSPU-variations are not uncommon, tumbling is a rare occurrence. Gymnastics, in any form, are a great way to increasing boost agility and build proprioception and kinesthetic awareness.

What exactly are proprioception and kinesthetic awareness? The two terms are often used interchangeably, but they actually mean two separate things. Proprioception is an inner sense (the central nervous system) while kinesthetic awareness is an external sense (the body in space and time). However, the two are basically inseparable, working together and impacting each other. Thus, a deficiency in one equals a deficiency in both.

Gymnastic skills, such as tumbling, are an important part of our broader athletic skills and set-up a strong foundation for competition in many sports. In fact, Chinese Olympic weightlifters actually begin their training lives with gymnastics such as “tumbling, handstands, flips and a whole lot of bodyweight work to create a good strength structure. They also sprint and jump to develop their explosive abilities.” Chinese coaches believe that by preparing them with many hours of gymnastics, as well as general sports that teach them to use their bodies in somewhat awkward positions such as dancing and wrestling, they train their coordination and help them understand their bodies better. This of course leads to a more innate ability to understand the relation of their body to the bar.* If it works for them, why not for us? 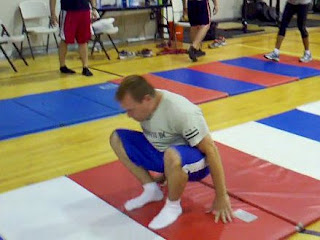 Before jumping right into the rolling, we began with a set of 5 split-straddles, followed by a set of 5 toes-to-floor split-straddles 9roll onto your back, and touch your feet to the ground above your head, before rolling back, splitting the legs and touching the ground in between your feet). Once complete, we began the tumbling work with forward rolls.

Everyone was required to start with shoulder rolls first (leading with the shoulder, rather than right over the head) to ease into the movement and get people comfortable. A quick forward roll tutorial:

The forward rolls were followed by, naturally, backwards rolls. Again, though, everyone was encouraged to exit the roll in their shoulder, rather than straight back on their head and necks. Backwards roll tutorial:

The first time CFDC got wind of the Hello Kitty Burpee (borrowed, I believe, from this YouTube Video), was back on Memorial Day 2011, immortalized in video format by Dre! On Tuesday, with a whole crop of new people ripe with new tumbling skills, we allowed those comfortable enough with the tumbling to give HK Burpees a go before they wrapped up the tumbling session. And now, we have a new HK Burpee video:

Thanks Tom A. and Jess!

Tuesday’s HSPU progressions saw the re-introduction of the band-rigs. For more on the how’s, and more importantly, why’s of using the bands for this very special exercise, check out our post from December, 2011 (“AMERICAN HANDSTAND“). 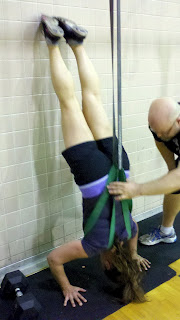 Suffice it to say, having people face the wall allows them to concentrate on maintaining core control, working to cement a solid hollow-body position through-out the movement. However, by simultaneously using bands to assist with balance, we also ensured that they would be able to incorporate their strength. In fact, in this set-up, the bands will allow you to pull your feet away from the wall, and perform an assisted free-standing HSPU if comfort allows. Additionally, placing people’s hands on parallettes/DBs requires full range of motion, but also helps in learning to keep the elbows in towards the body. 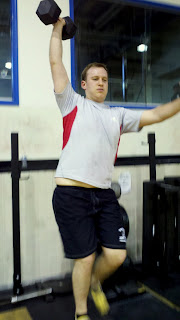 To really emphasize the importance of core-control, class finished off with a quick met-con of single-arm overhead step-ups, V-ups and Hyper-extensions (Supermans). Weight for the step-ups was RX’d at 1/4 body weight, although it was highly suggested that people scale according to their abilities – the goal being to maintain a locked elbow and active shoulder through-out the step-up.

What’s in store for Thursday? More breaks from norm? You never know. What you do need to know though, is that the forecast is calling for some hot weather, so be sure to get, and STAY, well-hydrated.

* many thanks to Kirk and his awesome blog “Lifthard.com” for the quotes and information used above. If you have any interest in learning more about the Chinese weightlifting system from a then-lifter, now-coach, check out Kirk’s website and some of the great articles he’s posted there, especially the series focusing on the “Chinese Weightlifting ‘System‘“