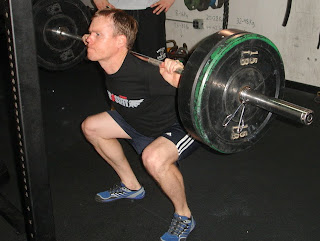 As we inch closer to the close-out of our squat cycle, there’s definitely an air of restless anticipation for the weights to come. Some are eager to see what they can do, some are nervous as to how much they’ll improve, and some are ready to go now, wanting to up their percentages before we even get to the end. Why? Well, simply because the weights are too light for them. So shouldn’t their percentages be increased so that they can get stronger and have a better PR?

No. And here’s why: While the goal of the squat cycle was to improve everyone’s max squat, not all of us needed more strength. Does that mean they aren’t getting stronger? Of course not. Instead, it means that some of us lacked something else; some of us had other things other than just a lack of strength, inhibiting our abilities. For some, it was a lack of form, or consistent form, that was limiting them. For other, it was comfort and confidence that was keeping them from moving more weight. In effect, the weights were scaled to allow for maximum adaptation to squatting. 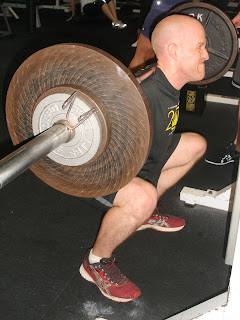 Way back in June of last year, we posted a discussion about scaling. I would highly encourage everyone to go back and read that discussion in its entirety, but to be clear, let’s revisit the over-arching theory behind scaling. Scaling is NOT about being too weak. Instead,

[s]caling is about mastering, and thus optimizing, your own progress. That is never a bad thing. Adaptation doesn’t come from continually trying to get through workouts beyond ones scope. Progress is a product of relentlessly hammering the weak links, so you can move up the ladder of difficulty. Keep in mind that progress is often a 2 steps forward, 1 step back type of game. So long as we maintain that general forward trend, we make progress.

The goal of the squat cycle was designed to build-up not just strength, but also form and confidence, ensuring that all three are operating at or near the same levels. So yes, some of you are strong enough to handle a higher PR now, but perhaps that wasn’t the issue before. So, instead of wanting to push the numbers higher now, wait, ensure that your form is crisp and unfailing, and be happy that you are going to walk into the gym on the final day of the squat cycle knowing that you’re about to crush your old PR. 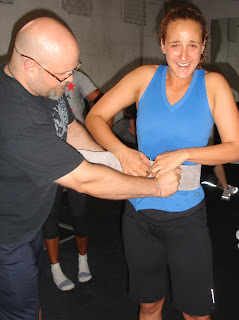 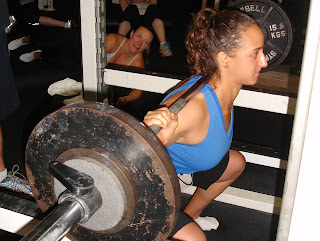 Add extra warm-up sets sparingly, however, as you don’t want to exhaust yourself before you get to the actual work sets – the goal is to warm your body up to both the movement and weight, making sure your muscles and CNS are primed to squat well, but also to ensure that you don’t shock yourself with a heavy load.

Knowing that we’ve been pairing hamstring- and glute-focused accessory work with all of our squat days, and considering the manual Glute-Ham raises had only appeared once, way back in the first wave, you knew they were bound to show up again before we closed out our squat cycle. 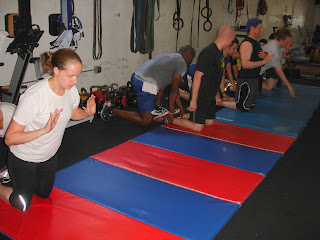 After laying out the mats, the programming was laid out as 3 sets of between 3 to 5 reps per set, immediately following each set with 15 hollow rocks.

We use a range of repetitions because MGHRs are not something to force yourself through, as form will undoubtedly break down, leading to a sort of on-your-knees-bent-over-good-morningish type of movement. Remember, the body should remain stiff during both the eccentric and concentric portions of the movement. Click the link above to watch a great demo video we’ve featured on the blog more than a few times if you’d like a visual of we’re talking about.

If your pic goes up on the blog and you don’t post a comment, that’s 20 burpees for the entire class the next time you come in!!

As we said originally when we announced this policy, CrossFit – and especially CFDC – isn’t just a gym, it’s also a community, and an integral part of that community is communication. Communication is more than just posting your weight, reps and time, but also questions, observations, and yes, just plain ole comments.

“A community needs communication – certainly when we’re together, but just as importantly, when we’re apart.” 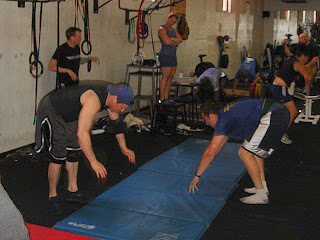 OH, and as for the name, well they were successfully dubbed by Kenna less than a week after their institution as “blourpees (burpees as a result of a blog).”