Was it mere coincidence that the epic trials known as the CrossFit Games ended on the same day as the epic trial known as the CFDC Squat Cycle? We’ll never know – but what we do know is who won the games (congrats to Annie Thorisdottir and Rich Froning, Jr. on their repeats as the fittest woman and man on Earth!), and who from CFDC PR’d on their back squats (that’s easier to answer – so far, it’s everyone!). Sad to report there aren’t really any pics for this post – however, we got lot’s of video from Sunday’s session, and are busy putting together a video of everyone’s efforts. Until then, read on for a recap of how Sunday went down.

Although it was said a number of times during the mobility session, it doesn’t hurt to say it again: if you know of personal limitations, or discovered some new ones, on Sunday morning, use the exercises prescribed to help improve yourself. You can review the videos linked, but also feel free to talk to Chris or Mike about reviewing the movements (or giving you some additional exercises).

Depending on how 95% felt, athletes were given suggestions as to how they should proceed. For example, if 95% felt relatively heavy and hard, then jumping to only 102-103% was advised; however, if 95% felt easy, then jumping right to ~105% might be the way to go.

Rules and Results:
The rules for the lifts were simple and straightforward: each PR attempt must be judged by a coach to ensure proper depth (remember, spotters aren’t judges!), and everyone was allowed two misses. A missed squat means either failing to stand-up with the weight (now officially known in CFDC jargon as a “squish“) or by failing to achieve proper depth (a NO REP! in Adrian Bozman’s words – favorite CF video ever, btw). An additional guideline, for those who didn’t miss and exceeded their 10% increase, was to limit their PR attempts to no more than 5 tries, as the cumulative impact on the body would start to exceed the benefits from finding a new PR. 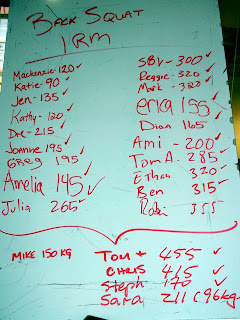 There are still a few people who are shooting for new 1 rep maxes, and we’ll update everyone with their numbers, as well as the compilation video as soon as possible.

What’s in store next? Well, you can bet that all this power work is leading somewhere, although, we wouldn’t blame you if you didn’t want to try to crawl inside our heads. It’s scary in there.

Many thanks to Coach Mike Choi for all his help during the Mobility session, as well as spotting, judging, and cheerleading during the squats. Also a big thanks to all those athletes/coaches who brought in foam rollers to help provide additional materials for much needed SMR before and during the squats. Lastly, big thanks to Katie for bringing in those ridiculously good paleo muffins again (because getting ready to crush her old squat PR by 15 pounds just wasn’t enough…). Hope everyone enjoyed the rest of their Sunday, as well as the close of the Games.