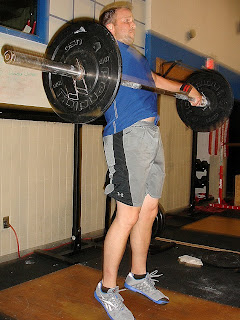 This past Tuesday, we started off class with a 20min block of time focusing on high reps of pull-ups. For Thursday’s class, we began similarly enough with another ~20min block, but rather than strength, it was skill, smoothing out the progression for the hang power snatch which would be utilized in the days met-con.

As mentioned above, to prime people to be as efficient as possible during the day’s met-con, we began with class-wide snatch progression with the PVC. The version employed, and pretty much any PVC-based snatch progression out there, will either be a replica or augmentation of Coach Mike Burgener’s snatch warm-up (universally referred to as the “Burgener Warm-Up“). When learning or reviewing the snatch, the Burgener warm-up is extremely helpful for reinforcing the bar path requirements. For Thursday’s skill review session, class worked through an extended Burgeneresque sequence, the goal of which was to focus on keeping the bar against the thighs until the moment of full extension, and then guiding the bar into the overhead position by keeping it as close to the abdomen-thorax-head as possible as it travels upwards. In short, we’re reinforcing the fact that we’re “CREATING MOMENTUM AND ELEVATION ON THE BARBELL THRU A RANGE OF MOTION!!“(-Coach Burgener). 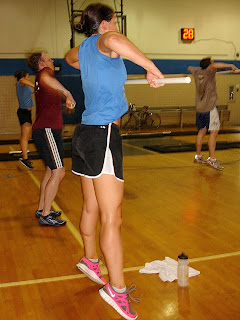 (#1) 5 x Extension and Jumps from the Hang Position (done without the PVC) – push the hips back and let the hands slide down the thighs into the hang position before exploding upwards, jumping as high as possible;

(#2) 3 x Three-count Extend and Shrug – drop into the hang position, and then slowly push the feet into the floor and extend upwards, sliding the PVC up along the thighs, during a three-count, with the 3rd count being the shrug;

(#4) 3 x Four-count Extend and High-Pull – drop into the hang position, and then slowly push the feet into the floor and extend upwards, sliding the PVC up along the thighs, during a three-count, with the 3rd count being the shrug and the 4th count being the high pull (high pull = elbows high and to the outside, also known as the scarecrow position);

(#6) 5 x Snatch Turnovers – pull the PVC up to the top of the high pull, which should be at or near the sternum, pause, and then quickly snap the PVC into the overhead position while moving the feet out slightly (slightly! the feet should land in a position where you could comfortable descend into an OHS if needed);

(#7) 3 x Four-count High-Pull and Turnover – the execution is the same as #4 above, except at the top of the high pull, pause, and then execute the turnover from #6; 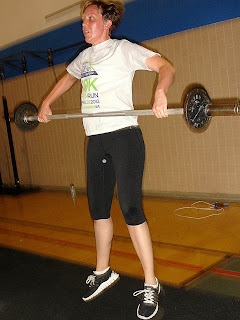 To transition from the PVC progression, everyone started off with a few hang power snatches (#9 above) with a barbell, so as to add weight to the movement. At this point, the body should be well primed to execute the pieces of the snatch without too much thinking. This is the point where many of us need to learn to get out of the way of our bodies, letting the muscle memory execute the action rather than over analyzing the movement and trying to think our way through the process (AKA Paralysis by Analysis). 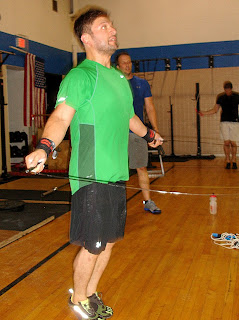 With everyone prepped and ready to execute the hang power snatches, class set about loading up the bars for the workout. Suggested RX’ing topped out at 95lbs for guys and 65# for the girls; however, the workout called for 7 consecutive hang power snatch, and the goal was to have people perform the reps consecutively, without putting the bar down. The caveat was that if you were getting tired and starting to perform sloppy reps (snatching jacks), we’d rather have you put the bar down and rest. Of course, if this was happening by round two, chances were you went too heavy and should be scaling down in weight.

Scaling for double unders was 2-to-1 single (or 70 single skips), although a second option – replacing the DUs with seven burpees – was provided for a few people who happened to do a deadlift-double under metcon on Wednesday night. 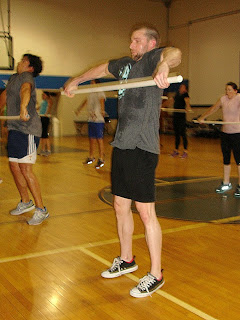 Thanks to John from United Barbell/CrossFit Soma in San Fran for getting in a workout with us while he was in town – gave Tom a chance to repay the favor after United Barbell let him get his squats in while on vacation a two weeks ago!

Definitely a humid evening in the gym on Thursday, so I hope everyone hydrated well afterwards. Looks like things will cool off a bit this weekend, so come prepared to go hard on Sunday! Speaking of Sunday, this weekend’s Elements class will focus on getting comfortable while being inverted (handstands).