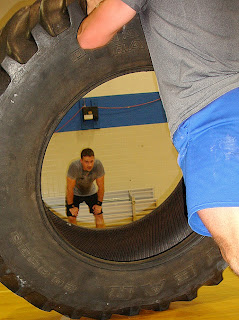 With the temperature hitting 100 degrees again yesterday, your coaches decided the original workout plan should be shelved for a bit, as it may or may not have involved athlete to athlete contact (intimacy at 100 degrees inside an un-air conditioned gym…yummy). However, the thoery behind what had been planned was still very much in evidence with the workout that was rolled-out: have fun while working out. After a short warm-up of inch worms, lunges/squats, push-ups, spider lunges, and some wrist stretching, class was split out into teams of 4 people: two ladies and two men. The ladies would be one pair, and the gents another. From there, the teams were walked through the day’s workout. 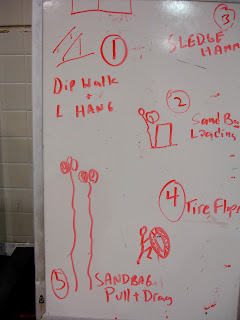 The workout was composed of 5 Stations: 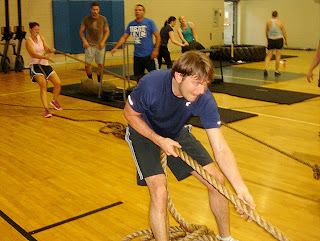 Each station, had two sets of equipment, one for the ladies and one for the guys (except the Dip Walk & L-Hang). Each team would get 5 minutes at a station, with 2 minutes to rotate and re-hydrate in between. 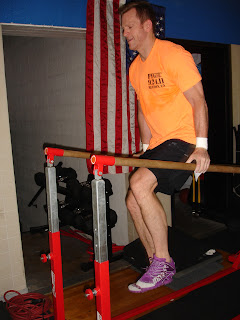 While three of the team-members perform a max L-Hang (scaled to Hanging Knee Raise), the fourth team member hopped up onto the parallettes, which had been set an incline for the days workout. With arms extended (as you would be at the top of a dip), the team member hand-walks up the inclined parallel bars. Once they were all the way across, they would hop down, and change places with one of their teammates on the L-Hang. 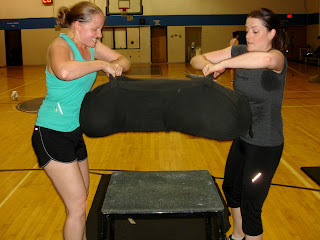 The premise here is simple: pick the sandbag up, load it onto the box, and then push it over to the other side so your partner could then do the same thing. The reality is that the sandbags were 100lbs for the ladies and 150lbs for guys. As such, athletes had options of alternating the loading, as described above, or, BOTH could load the sandbag, push it over, and then walk around to repeat the process. 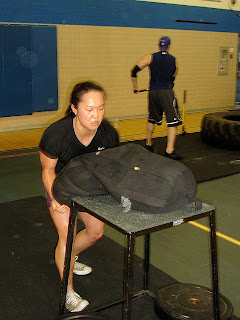 The exact rep scheme was up to partners, but the suggested rep range was between 5 and 15 at a time before switching. Partners also had the option to alternate arms each strike, or could do their first set entirely on one side, and then switch sides the next time up – alternating was a must though. 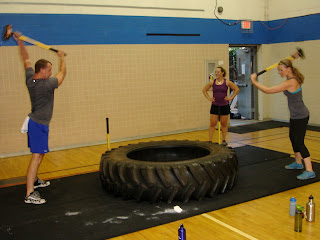 Three weights of hammers were provided: 8lbs, 10lbs, and 16lbs, and two teammates could go at a time, one guy and one girl, working on opposite side of the tire. 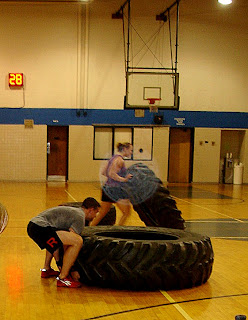 With the biggest tire being used for sledgehammer strikes, a choice of three tires remained: one large, and two medium (which, although different in shape, are about the same weight). Flip the tire, then your partner flips it back, going back and forth as many times as possible in 5 minutes. 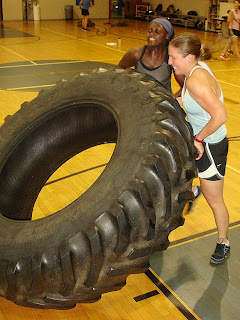 Props to Ami and Joanna, working in a group of 3 due to an odd number of people, who decided to team up and return flip the big tire to their partner Ethan! 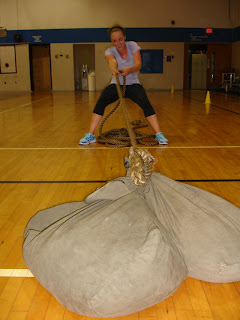 Hand over hand pull the ropes, each weighted with two sandbags, roughly three-quarters of the length of the court, then drag the bags backwards to the starting point so your partner could start their pulls. Gents got the fat rope, while the ladies got a thinner diameter rope, each with a rough total weight of 75-100lbs of sandbags attached. Definitely helped if your partner stood on the end of the rope while you dragged the bags back down the court to stop the end of the rope from following you.

After 33 minutes of fun, everyone was sent upstairs to roll out and enjoy a little AC before being released for the evening. A little something different and unexpected to accommodate the uncomfortable conditions in the gym. 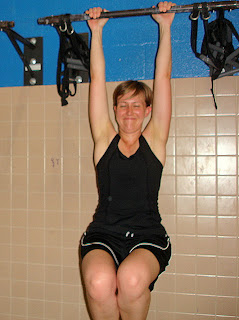 For those who were avoiding the awful conditions, stuck at work, out of town, way out of town on the other side of the world, resting up for a competition, or just plain avoiding Tom and Chris (and who could blame you?), fear not, we will revisit these again sometime in the near future. Until then, howboutsum Olympics!?! (Opening Ceremonies tonight, 7:30pm NBC)