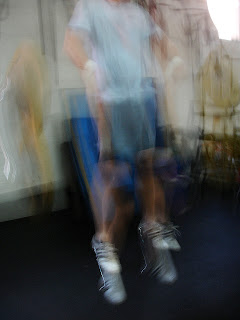 The Olympics are in full swing, and there have already been a bunch of amazing performances, especially in the weightlifting arena, including a new women’s 53kg world record clean and jerk of 131kg (288.2lbs) by Kazakhstan’s Zulfiya Chinshanlo (who turned 19 just last week), and a massive clean and jerk by North Korea’s Om Yun Chol, lifting in the 56kg men’s category, of 168kg (369.6lbs), more than THREE TIMES his own body weight!

So, how did we mark the occasion at CFDC? By doing a little Olympic weightlifting, of course!

After a short warm-up, class got started on two sets of 2 un-weighted hang high-pulls followed immediately by 2 un-weighted hang power cleans. The purpose is to get athletes to focus on dragging the bar up their thighs to practice keeping it against their legs, and then pop the bar up with the hips, using the high-pull – with elbows high and to the outside – to guide the bar, keeping it in close to the torso as it rises. The two power cleans should be the exact same movement, but instead of letting the bar drop again, whip the elbows around the bar at the top of the high pull to complete a power clean instead.

Following completion of the High-Pull and Power Clean combo, class moved onto three sets of one hang-high pull, followed by a power clean, followed by a front squat. Weight was added in small increments to all three sets in order to revisit the un-weighted movements from above, as well as prime the body for the working sets to come. 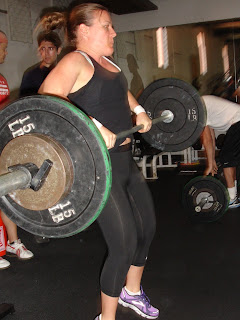 After completing the two prep sets, athletes began working through six sets of one power clean followed immediately by one hang squat clean. This requires keeping hold of the bar through out the set, not letting it touch the ground again after the power clean had been initiated.

This is a pretty classic combination, helping to develop consistency along with efficiency in the movement (the same applies to using it with the snatch as well). The effect of combining the power movement with hang-squat movement will work to increase grip strength while focusing a lifter’s attention on keeping the bar close to the body, brushing the thighs, and getting under the weight, whipping the elbows around the bar to receive it on the shoulders. 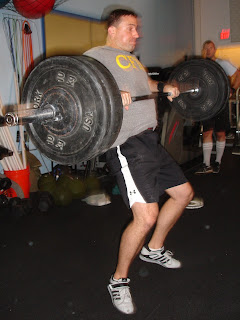 Oly combos or complexes are superb at helping ingraine technique while changing things up from the traditional lifts. They also help with conditioning, going for a slightly higher volume (more total reps) at reduced weight, owing to the back-to-back repetitions.

Just how useful can reduced weight combined with increased reps be? Why not try out some high-rep back squats to find out.

Building on the success of the CFDC squat cycle, Sunday’s class tackled the first in what will be a short series of high rep back squat workouts. These workouts will add muscular endurance onto the the strength achievements provided by the squat cycle (and evidenced by the increase in 1 rep maxes). Two warm-up sets were programmed prior to the work-sets: 1 x 5 at 35%, and 1 x 5 @ 50%. After that, athletes loaded up the bar at 65% of their new 1RM, and went for 3 sets of 10 reps each. Not easy by any stretch of the imagination. 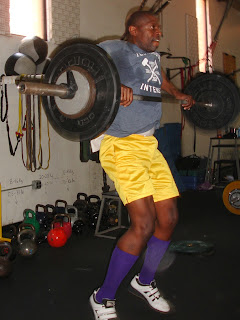 Speaking of Olympic weightlifting, congratulations to Reggie on a solid performance at the 2012 Keystone games held at York, PA this past Saturday. 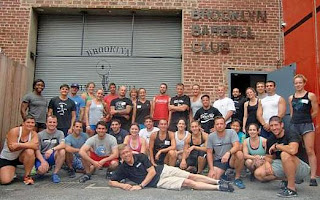 Also, a big congratulations to Erica on her CrossFit Endurance certification this past weekend which took place at CF Virtuosity in Brooklyn, NY. Look for lots more Endurance WODs in the near future!

Finally, CrossFit DC Shirts are back in stock! Just to be clear, you can purchase a shirt for $20; you don’t have to “earn” them. Of course, if you did want to earn one, this would definitely be a great approach: 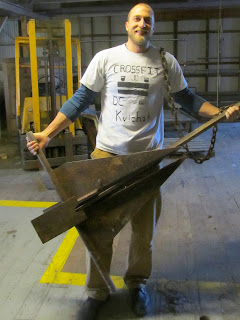 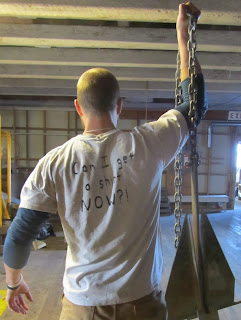 See you all Tuesday. Until then, enjoy the Olympics.