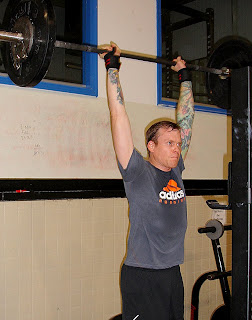 After a leg searing Sunday, Tuesday took things back up top for some pressing work, followed by a good dose or core work in the met-con.

After working through a strict-press to push-press-burnout progression two times in the past months, this Tuesday focused solely on the push press. The push press will allow you to move more weight into the overhead position, but it also demands more attention to body position to both get it there and keep it there: 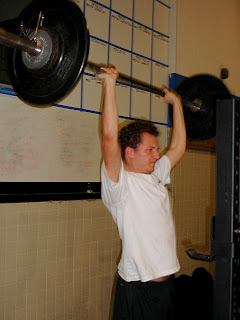 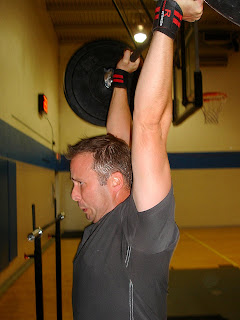 Class near the half-court line with 5 jump squats, then placed their feet on towels and mummy crawled 35 feet towards the end line where they performed 10 hip bridges before mummy crawling back to the mid-court line. 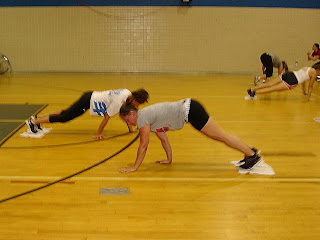 Hip bridges were RX’d as feet on the floor, but could be scaled up by placing the feet onto something – bumpers, plyo-boxes, or bleachers – which increases the range of motion. To perform, press the feet down and drive the hips as high as possible towards the ceiling, pause at the top, and then lower down until the tailbone touches the floor before beginning the next rep. 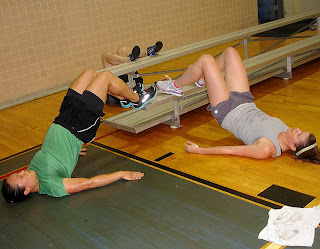 The humidity seemed to be responsible for some raw palms during the 6pm class, to the 7pm was roundly encouraged to tape up the base of their palms, while the met-con was slightly altered, upping the jump squats to 10 reps and then hip bridges to 15 reps.

Great work. Not quite as fun as last Thursday’s evening classes, but a good time nonetheless. Hopefully everyone is getting lot’s of Olympics watching in, but if you have a couple of minutes, I would highly suggest you check out today’s Mainsite WOD, especially the video demonstration featuring our own Ethan Bronstein and Sara Katz, as well as Coach Mike Choi!