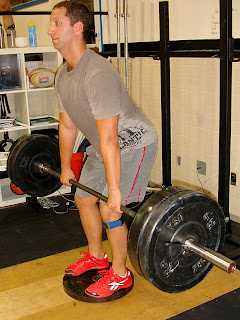 After the completion of the back squat cycle, one of our stated goals was to take the strength gained from the squats and begin to apply it to explosive power movements, with specific emphasis on the Olympic lifts. However, to ensure that the strength and power is properly directed, we spent some time on Thursday “cleaning” up our clean pulls. 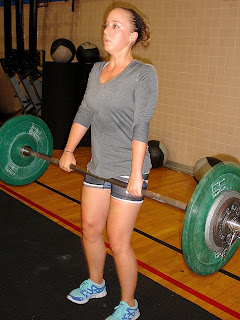 Thursday’s programming called for athletes to perform back-to-back repetitions of the three-position clean pull with moderate weight, with a maximum of no more than a person could actually clean. Athletes could add weight across all 8 sets so long as the weight did not cause the form to break down – this wasn’t a strength building exercise so much as it was skill and form reinforcement.

As demonstrated in the video from Catalyst Athletics linked in the workout-title above, the Clean Segment Pull is “a clean pull with segmented stops on the way up.” These stops are inserted into the pull in order to help to reinforce proper body position by allowing a lifter to assess their form at multiple points during the pull. The Clean Segment Pull demoed in the video uses an initial stopping point about an inch off the floor, which we did not use in our version. Instead, we simply made use of one pause at the knees, a second pause at mid-thigh, and then a full extension and shrug to finish.

Many beginning lifters (which includes a large portion of crossfitters) have a habit of wrenching the bar off the ground, trying to make the entire lift as fast as possible, instead of a steady 1st pull to the knees which then sets them up for an explosive second pull. As a result, the bar is often kept close against the shins, but never touches the thighs, which is pretty much the opposite result of what’s desired (and, unsurprisingly, necessary for an efficient lift). As such, Thursday’s clean pulls were programmed with specific stopping points that would reinforce a steady and controlled first pull followed by a second pull which is initiated with the bar against the thighs.

First Stopping Position = Pause at the Knees
This basically represents the first pull of the clean. The goal was to have athletes concentrate on initiating the lift by extending the legs at the knees while driving through the heels, making sure the hip and back angle rise at the same rate, as opposed to letting the hips shoot up faster than the shoulders. It’s also important to remember that the First Pull should be comparatively slower than the Second Pull, regardless of the weight. 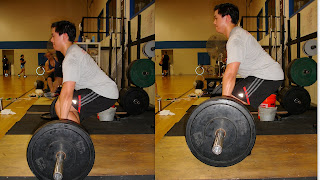 The above profile pics are of John Tran in his set-up position (@ left) and at the first stopping position (@ right). While John’s shoulders could stand to be a little more centered over top of the bar (rather than behind), he’s done a great job of ensuring that the angle of his back hasn’t changed from the first to the second position.

Second Stopping Position = Pause at the Mid-Thigh
The goal of inserting a pause half way up the thighs was to ensure the bar was against the legs. The violent hip extension during the Second Pull is what imparts the power needed to move the weight during the clean. By not keeping the bar in close and against the thighs, much of the power generated in the Second Pull is negated, which often leads to compounded problems in the Third Pull. 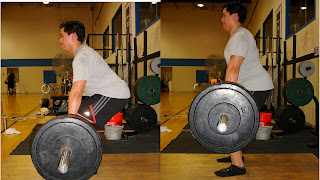 John at the first pause at the knees (@ left) and the second pause at mid-thigh (@ right). His back angle has changed, but his shins are still vertical to the ground and his chest is up, which will help to ensure that the explosive portion of the second pull will be up instead of forward.

Third Stopping Position = Full Extension with a Shrug
This represents two-thirds of the second pull (the last third being the high-pull, or scarecrow position, with the elbows high and to the outside). After ensuring the that the bar is against the thighs, we can now concentrate on moving the bar by squeezing the glutes and extending the hips. The combination of the hip extension with the shrug helps ensure that the bar moves straight up the body, not out away from us. 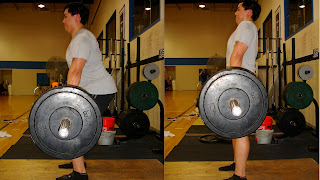 John at the second pause at mid-thigh (@ left) and at the finished position with his hips fully extended and shoulders shrugged (@ right)
(NOTE that because John was being kind enough to pause at the top of the finished position, he is flat footed – during a full effort, the momentum from the hip extension would have pushed him up onto his toes)

For more information on the three pulls of the clean, check out the blog entry from last (“Cleaned Out“), especially if you’re still a little unfamiliar with the terminology being slung around (triple extension, 1st pull, 2nd pull, etc). While you’re at it, now’s as good a time as any to re-read Coach Mike Choi’s Points of Review for the Clean. We’ll be seeing plenty more cleans in the near future, and those who are adequately armed with the information contained in these posts will have a much easier time absorbing the coaching points handed out in class. 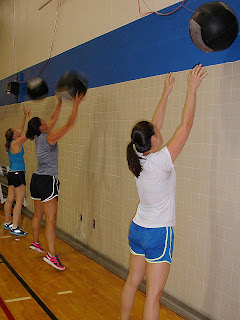 Simple to execute once you understood the rules for the jump rope. The “100 Rotations” means 100 times around, which includes double unders. However, you were allowed just one chance at completing those rotations with double unders (50 double unders); once you broke, the remainder of the rotations were to be completed with single skips (i.e., if you did 18 double unders before breaking, you would still need to do 64 single skips before going back to the wall balls). This remained true for every set of jump rope.

It was great to see so many people concentrating on the perfecting their clean pulls. This will definitely pay off. Speaking of pay-off, those of you interested in conquering strict pull-ups should be sure to check out this Sunday’s 9AM Elements class:

There are a number of you who have expressed an interest in either achieving a strict pull-up or increasing the few you have, and this Sunday’s Elements class is just for you!

We will begin with a warm-up and mobility session, a review of the proper technique, and then each of you will have one shot to get as many strict pull-ups as you can (even if that’s zero!). We will then use these numbers to create a 2x-per-week pull-up program specifically for you. This class will be for athletes with either little or no strict pull-ups (5 or fewer in one attempt). The remainder of the program details will be explained during Elements on Sunday.

One Last Thing – thought all of you might appreciate the following photo – apparently, Steph found a familiar face lurking around the streets of Beijing, China: 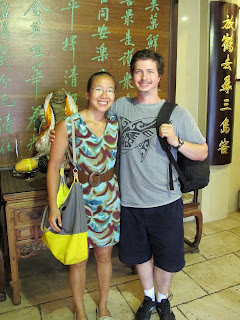 Glad to see Max is doing well. As a matter of fact, for those of you who missed it, Max actually left a comment on this past Sunday’s blog-post, CLEAN AND MEAN. Fear not Max, you are definitely missed as well!