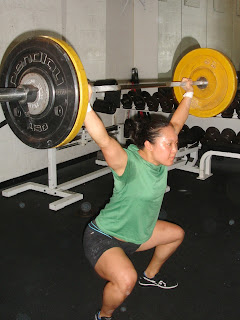 This past Thursday, our strength/skill session was devoted to the Clean pull, and focused on the first and second pulls (or at least the first 2/3 of the second pull). The goal was to help nail down a proper pulling sequence – not letting the hips shoot up, keeping the chest up, ensuring the bar is pulled in against the thighs and remains close to the body – in order to set us up to adequately use the most explosive part of the movement (the entire second pull). Sunday’s class sought to build off this foundation. We focused on the Snatch, and instead of pulling from the ground, all lifts were done from the hang. This allows us to really concentrate on the explosive second pull, and, once again, really hammers the need to keep the bar in against the thighs as we execute the lift. 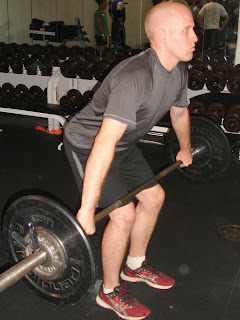 Everyone began with one Prep Set of 3 Hang High Pulls followed immediately by 3 Hang Power Snatches with no weight on the bar. This allows the body to adapt to the coming work with good form by not stressing the CNS by trying to also move heavy weights. Following the prep sets, the day’s program called for class to work through between between 8-12 working sets of 1 High-Pull + 1 Power Snatch, with 12 being the absolute maximum. Weight could be added across all sets so long as it didn’t trump good form. Speaking of good form, following are two notes of interest – one which concerns a point that was stressed before class began, and the other which was concerns an observation as class worked through the day’s program.

Practice Like You Play!
Bad habits, like good habits, are built, sometimes out of frustration, sometimes out of laziness or ignorance of consequences. The result, however, is the same: once ingrained, it’s difficult and time consuming to unlearn. Where possible, avoid building bad habits, especially those built from laziness. Case in point: Proper set-up and extension when performing Olympic lifts from the hang. We don’t have the luxury of having mutliple sets of blocks to lift from during class, so any work done from the hang requires us to pick the bar up off the floor. How we do this can be just as important as how we perform the following lifts from the hang position. 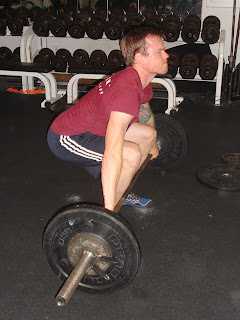 When performing movements from the hang position, make it a habit to pick the bar up just as if you were about to perform a full/complete lift from the floor. If you look back at Thursday’s blog post, you’ll notice we commented on the fact that a lot of beginning lifters, especially crossfitters, tend to drag the bar up their shins, but then let the bar get away from their thighs once they pass their knees. This of course mutes the power from the hip extension, and is often associated with an early arm pull. Working from the hang will help teach a lifter to keep the bar against their thighs when lifting; However, if the lifter continuously picks the bar up from the floor with improper form, and then tries to perform a lift from the hang with proper form, what do you think will happen the next time they attempt to do a full lift from the floor? (If you thought “it will be perfect,” then we need to have a long talk…). Remember, practice like you want to play (“lift”), and you’ll play like you practice.

Good High-Pull…Bad Snatch?
A power snatch is nothing more than a snatch high-pull with a turnover at the top. Yet, a common theme on Sunday was to see an athlete perform a decent high-pull (hips extending followed by a nice shrug and high pull with elbows to the outside) followed immediately by an ugly power snatch (early arm pull, excessive lay back, feet out wide, etc.). 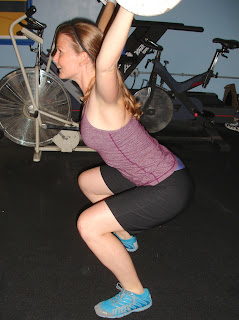 Don’t over think the lift; don’t get so caught up in the fact that you’re actually snatching as the second movement that your form goes to hell. Simply perform a second high-pull, but turn the bar over at the top to catch it in your hands.

Weight for the OHS were set at 45, 55, 65, 75, and 95lbs (apparently we discriminate against a weight of 85lbs), with groups assigned their weight based on strength and pull-up ability. Those with efficient pull-ups could kip, while the remaining groups were scaled to ring rows and band assisted pull-ups. 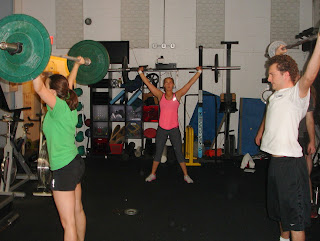 Everyone started with the OHS, with athletes following each other through the movements – so P1 did 1min of OHS, then rested 1min while P2 did their OHS, then P1 did 1min of pull-ups, P2 rested, and P3 was on OHS. The rotation continued in this fashion until everyone had completed 3 full rounds.

Nice to see a lot of form improvement in the lifts on Sunday, especially by those who are newer to the lifts. Remember, we spent 16 weeks building up the strength in our hips and posterior chain from squatting, and now’s the time to learn how to use that strength to move bigger weights with better form. See you on Tuesday.