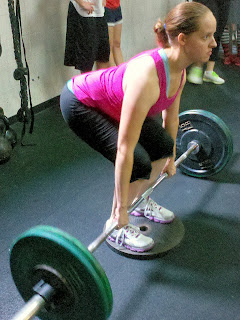 The title has nothing to do with our lack of attention, just our ability to produce a sufficient rate of force development during the deadlift. And, honestly, when is extra force during lifting ever a bad thing?

The strength session began with 2-3 warm-up sets working without a deficit.  For the 6 working sets of 3 reps, athletes could add deficit as desired, as well as increase weight across all sets as able (“as able” = with good form). Adding deficit meant raising the feet up anywhere from 1 to 4 inches, and could be accomplished by standing on a single 45lb iron plate to stacking the same 45lber on top of a 10lb, 15lb, or even 25lb bumper (standing on the iron plate is preferred, as it provides a flat surface, as opposed to standing on the uneven surface of a bumper plate alone). 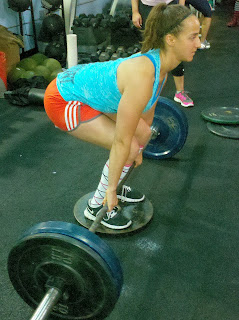 So why work from a deficit? Essentially, we are tricking our bodies in order to improve our bodies rate of force development (RFD). That all sounds very technical, but the simple fact is the faster your RFD, the faster the bar will start to move off the floor. If your deadlifts are slow, even at light to moderate weight, then you’re starting with one foot in the hole when it comes time to load the bar up. Two of the most effective, and thus popular, ways to help develop your RFD are: (1) Speed Pulls, and (2) Deadlifts from a Deficit.

We’ve used speed pulls to try and help our deadlifts a number of times in the past, with a notable post this past March (“OPEN UP“) about the essential “need for speed” in a speed pull. Unfortunately, too many of us want to push the weight during the speed pulls, thereby negating the positive effects. That’s where deficit deadlifts come in handy: you can increase the weight while still realizing the benefits to your RFD.

By deadlifting from a deficit, you increase the range of motion required for the lift. The extra range of motion requires extra energy to initiate the lift and get the weight moving. The extra energy of course translates into extra force. In short, you are tricking your body by making it work harder to lift weight that would normally feel lighter. If we were to revisit the same deadlift rep scheme next Sunday but without working from a deficit, the weight would seem to fly off the floor (and just to be clear, we’re not revisiting deadlifts again next Sunday – just speaking hypothetically of course).

As a brief interlude before the met-con, everyone headed down to the court for a brief reminder on body position and core control during when performing handstands before getting to work on 2 rounds of up to 20 handstand shoulder touches. Remember, the key is core control – if you find that, as you’re performing the touches, your hands are steadily moving away from the wall, it’s a good indication that your core is not tight, and the sagging in your mid-section is causing you to move your hands to compensate for the lack of balance. 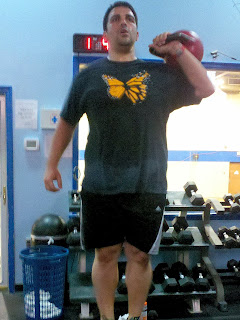 For the met-con, class was broken up into groups of three of four people, with each person starting on a different exercise. No rest was provided between exercises, simply rotate from one movement to the next as quickly as possible and get started. Plyo-Lunges were scaled to walking lunges, and ring push-ups were scaled to ring holds (arms-extended) so that everyone could get used to the stability requirement of working on the rings in the prone position. Step-ups could be done with either a single dumbbell or kettlebell held in the rack position – athletes could alternate sides as desired, so long as the numbers were as even as possible in the end. 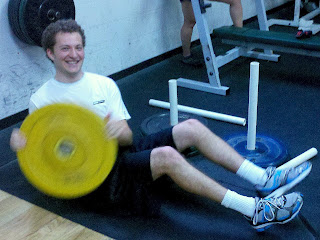 After quickly putting away the equipment, the entire class enjoyed a much deserved cool down while listening to an important and extremely influential guest speaker – influential in that Dr. Paul Glodzik, an injury and sports performance specialist, is on familiar terms with more than one CFDCer and their related limitations.

On behalf of CFDC, we want to extend a huge thanks to Dr. Glodzik of the Washington Injury and Sports Performance Clinic for coming visiting us on Sunday to share his expertise, especially as it applied to nagging shoulder problems which seem inherent to CrossFitters. Per Tom’s own words:

Paul has been instrumental in my ability to regain movement and increase ROM, especially in the shoulders. This has directly improved my snatches, OHS, kipping and handstands. I asked Paul to come and share some tips on shoulder health with the rest of our group.

Paul covered 4 pathways we can use: self mobilization, proper alignment, specific strengthening, and professional care. The first, self mobilization, we cover through the use of resistance bands, foam rolling, and lacrosse/yoga balls. Paul explained how we can use the ball to unglue the sliding surfaces and break up scar tissue in the shoulder blade area, as well as both the pec minor and major. Paul also covered some points every CFDCer should be intimately familiar with, including “scapular retraction and depression,” keeping the shoulder blades pulled together and down away from the ears. We already make a huge point of the importance of this in pullups, deadlifts, cleans and snatches, but it’s also the only way to keep the shoulder safe in the bench press.

Paul also covered a few specific exercises for the muscles of the rotater cuff (supraspinatus, infraspinatus, teres and subscapularis, collectively knows as “SITS”), which included internal and external rotation, scapular positioning via the overhead pulldown, and band pull aparts. If you missed it, or can’t remember everything, fear not, as we plan to review and integrate these exercises to make sure everyone is utilizing them correctly. Again, the focus is on alignment and full ROM.

For those of us struggling with issues which aren’t being resolved by the implementation of the above, Paul closed out by discussing some of the options for treatment that he offers. Paul is lifelong athlete himself, and while he is a licensed Chiropractor, more of his work is done using ART (Active Release Technique), Graston Technique and Kinesio-Taping. These techniques are often less than comfortable, but extremely effective. Breaking up the adhesions and scar tissue works wonders for the range of motion. You can check out Dr. Glodzik’s bio on the WISPC site. To contact Dr. Glodzik and set up an appointment, you can either email him at InjuryFreePerformance@gmail.com or call the WISPC office at 202-363-1011.