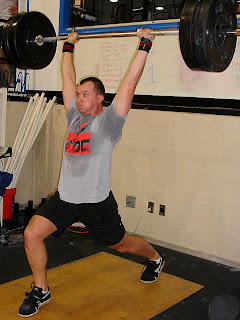 Before getting to the strength sets for the day, class spent some time working as a group to review the split jerk. Often times when jerks come up in class – or are performed under stress – the go-to is the push jerk/power jerk. However, for the vast majority of people, the split jerk will be faster and allow you to get farther under the bar, which translates into being able to get more weight overhead. Unfortunately for that majority, the split jerk is a more complex technique than the push/power jerk, and that means more practice in order to dial in the technique. 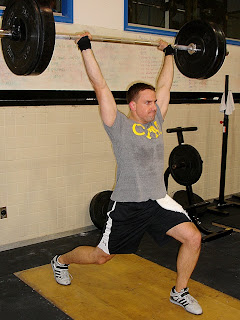 We’ve gotten a fair amount of use out of our own Coach Mike Choi’s “Points of Review for the Jerk,” especially in an early December post last year (“AND YOU JERK IT OUT“) where we re-posted the Points of Review but added an additional point covering the dip portion of the dip-and-drive. The one thing I want to concentrate on in this blog-post however, is the position of the feet.

Sure, a proper dip followed by an explosive extension of the hips will get the weight over head, but without proper foot placement, the weight won’t be stable enough to maintain that overhead position (instability = inability). The big key for the split jerk is to remember that the feet not only move North-South, but also slightly East-West. This diagram from Coach Mike Burgener’s twitter feed is a great illustration of that point: 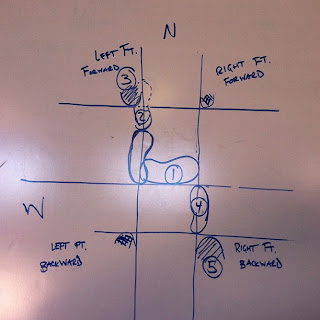 The feet start a little less than a full foot distance apart, which places them directly under the hips. You’ll also notice the each foot is split by a vertical line in the diagram. Upon landing in the split jerk position, the feet have moved into that lunge-like position (the North-South movement), but are also now at least a full foot distance apart from each other, placing them outside the vertical lines in the diagram (the East-West movement).

The second most important part of the split jerk is the angle of the front knee, which is largely dependent on the landing position of the front foot (surprise, surprise, it’s still about foot placement). When starting out, most of us have a tendency to push the rear foot back much farther than the front foot goes forward, leaving us with an acute angle in the front knee: 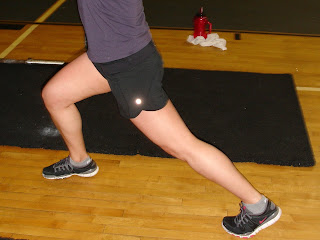 In this photo, you can see the acute angle of the front knee is causing the torso to lean forward over the front leg. Beyond creating instability in the receiving position (especially the front foot), this will demand that the lifter press and stabilize the weight behind their head in order to keep it in the middle of their landing position, which is often accomplished by overarching the back.

Instead, the ideal position is to land with the knee angle at greater than 90 degrees, allowing the ball of the front foot to drive into the floor: 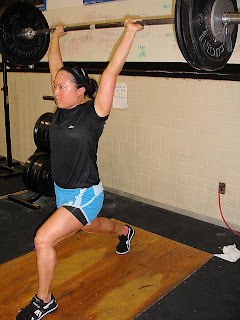 This will allow the lifter (here, Julia) to center themselves under the weight by pushing into the floor with both the front and back foot simultaneously. The resulting body position is not only balanced and centered without the need for overarching the back of carrying the load behind the head to keep it in the mid-line.

Lastly, although foot position is of primary importance to achieve the above two points, a good landing (foot position-wise, anyway) can be negated by landing with the back leg locked out in extension. Similar to, and often associated with, an acute angle in the front knee, the excessive push from the locked back leg will cause a lifter’s torso to lean forward: 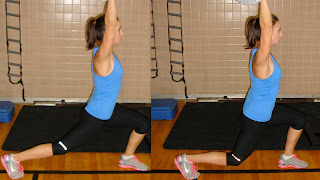 In the photo at left, you can see MacKenzie’s rear leg locked in extension, and the resulting forward lean of her upper body, which she’s negated by excessively arching her back. In the photo at right, she’s unlocked the back knee, which has allowed her to assume a more upright torso position, with her hips under her chest, even with the slightly acute angle in her front knee.

In doing an internet search for Coach B’s foot position chart above, recalled from reading something he had written earlier on, the following chart of various jerk foot positions presented itself, which pretty well sums up most of what we just covered: 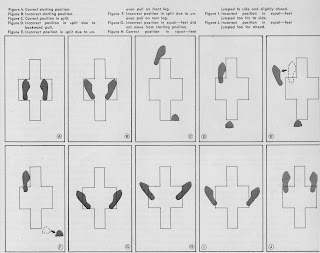 Click on the image for an enlarged view, and you’ll be able to read the captions for each lettered position, which tell you if the position is “correct” or “incorrect” and why. The full blog-post, in which the image was used, includes additional discussion of jerk foot positioning, and is entitled “Watch Those Feet – Dave Webster” via the blog THE TIGHT TAN SLACKS OF DEZSO BAN.

In order to put the above into practice, class spent roughly 30min working on weighted jerks for the day’s strength/skill portion of class.

With moderately heavy weight (Sub-maximal effort), everyone was to complete 5 to 6 rounds of 3 jerks. Weight could be taken out of the racks, or from the floor. Everyone was encouraged to work on the split jerk as comfort permitted; anyone for which the split jerk was brand new or felt that the position was detrimental could use a push/power jerk. 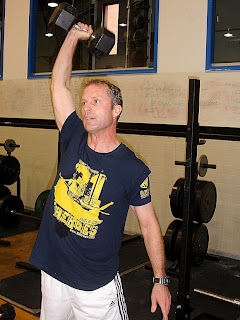 It was great to have Brendan back,
fresh from his extended trip in Afghanistan. Welcome back!

Nice to have some more moderate temperatures this week, making things just that much more bearable inside the gym. This doesn’t mean that everyone can slack off of their hydration though – keep up the good work. Also, in case you missed it, Dr. Paul left a follow-up comment to Sunday’s blog-post:

“I just wanted to say it was nice meeting everyone. I hope you all learned something from my talk and that you can put it to use. If you would like to hear about my other favorite topic (tight external hip rotators) just let Tom know. Thanks! Dr. Paul”

See you all on Thursday.