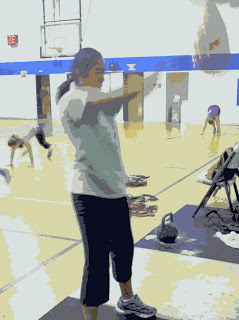 Since everyone had sooooo much fun during last Thursday’s extended met-con, we decided to give another one a go this Thursday. 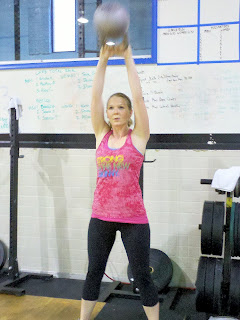 Class was split off into pairs, with one person completing their 3min of work while the other rested. Each individual was instructed to keep track of where they left off during the 21-14-7 when their 3min round was over, and then start at that exact same spot the next round (i.e., if you had completed 3 rounds, 21 DUs and 10 KB swings when time expired on your first round, you would start the second round at KB swing number 11). Final score was total rounds and reps. 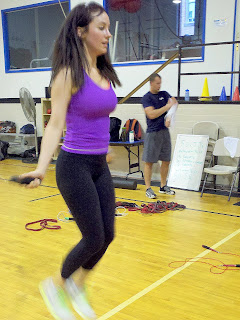 Sub for double unders was 21 mountain climbers + 21 single skips so that you get the cardio response of the double unders from the mountain climbers, but still get the time in on the jump rope. KB Swings were programmed as American-style (overhead) but scaled to Russian-style (eye-level) for those uncomfortable with the overhead position. Push-ups were done games-style, with a hand release at the bottom.

Quick reminder for high rep KB swings: especially during a met-con situation, where your hands are getting sweaty and your grip is giving out, hold the kettlebell at the corners where the handle and tops of the horns (the side-bars of the handle) meet. 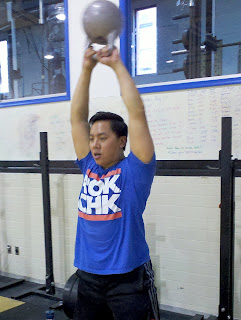 By positioning your hands in the corner of the handle (doubled up with the cue to “pull the handle apart,” as John has above), you’ll gain control over the kettlebell without having to squeeze your grip even harder. This will not only ensure that the KB doesn’t flop over at the top of the swing, but will also save your hands.

As a follow-up to Dr. Paul’s visit this past Sunday, we’re are going to start featuring a number of his recommended resistance band exercises, which will help build-up strength in the shoulders, but also help relieve any lingering issues born of improper mechanics.

The 7pm class received a special 20-burpee finisher, bestowed as a result of Josh’s misunderstanding of the blog-photo-equals-comment rule, in which he replied, “well I could use the extra conditioning” – this on top of the fact that the photo in question showed Josh with the biggest grin we’ve ever seen on someone during a met-con! Despite that, and because Thursday was Josh’s last class before he heads back to college, we thought we’d leave you all with a follow-up photo to rival the previous: 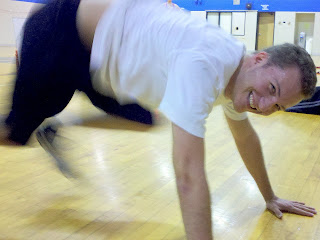 And see the rest of you on Sunday.