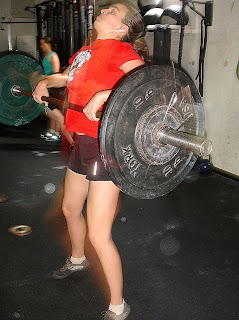 After a low-weight, high-heart-rate met-con attack on Thursday, Sunday’s class featured a little more weight, but sought to get everyone’s heart racing equally as much, beginning with an intense warm-up to prep everyone for the work to come. 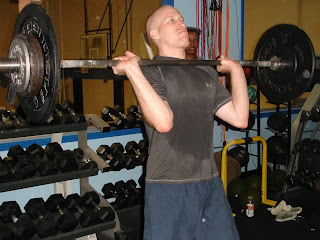 Following this past Tuesday’s class dedicated to the jerk (as well as the extensive blog-post following the class entitled “ALL IN A DAY’S JERK“), Sunday’s class set out to pair the jerk up with it’s natural partner, the clean. Class broke out into groups of 2-3 people and worked through two prep sets with little to no weight on the bar, followed by the day’s working sets. 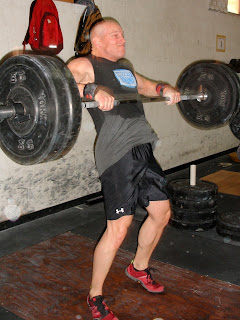 Rather than true doubles (which should be done as touch and go), Sunday’s two reps of C&J were done as a single-drop/reset-single. This allowed everyone to push the weight more than they would be able to in a true double, but still less than with heavy singles. As such, athletes were allowed to add weight across the 8 sets as able, but preferably staying 10-15% below max effort.

Think, then lift.
The principal of the drop/reset sets is similar to true doubles: the pattern of the lifts helps reinforce how to be as efficient as possible when executing the lift. However, where the double forces a lifter to not think and just go, the drop/reset structure actually allows a lifter a brief moment to consider what points in the first lift can be improved before performing the second lift. This is especially important for those who are still coming to grips with the split jerk. 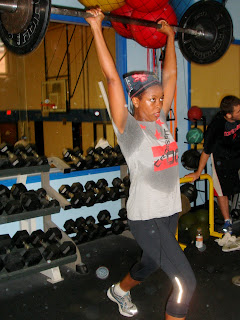 For example, if an athlete is able to C&J the weight, but lands with the back leg locked or foot turned out, then they are able to drop the weight, visualize a better landing (rear heel up, knee slightly bent, foot turned in), reset, and then execute the lift a second time aiming to correct the faults from the first lift. The drop/reset period is key to helping the improvement in this situation, as a lifter must think during the rest period, rather than trying to think through the form while executing the lift. The former leads to better lifts; the latter often leads to disaster – we’re just not able to process the information fast enough while attempting to execute a lift that lasts a matter of seconds. Don’t think and lift; think, then lift.

Six weeks ago, we hit three sets of ten back squats at 65%, and then two weeks ago, we upped the reps to 12 at a time (but for only 2 sets). At the time, we mentioned that two additional reps doesn’t seem like a lot, until you get the weight on your back and moving. Well, if adding two reps didn’t convince you, howabout upping the rep scheme to sets of 15? 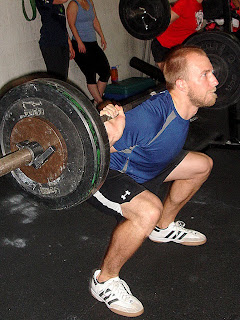 Two warm-up sets were programmed with one set of 8 @ 30%, followed by one set of 6 @ 50%. After that, it was two working sets of 15 reps to be done at ~65% of your 1RM back squat. Fun times! And yes, you should find yourself breathing hard during these high reps sets; the key is to gain control of your breathing and concentrate on squeezing the abdomen tight before the next rep.

Great work in another big class. Additionally, a big THANK-YOU to Ben & Ben, Katie, Steph, and Jen Choi (along with Stella and Maggie Choi, of course!) for making the trek up to Ft. Detrick to cheer on Mike, Sara and Chris – it was great to see some friendly faces in the crowd! See you all on Tuesday.