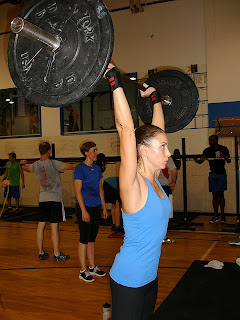 Apparently, the long Labor Day weekend had quite a few people itching for a CrossFit workout to start the short week off right. Nice big classes Tuesday night, which in turn made the nice humid gym even more nice and humid. 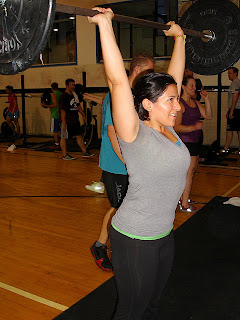 We’ve mixed strict and push presses together before, but for Tuesday’s workout the mix ran a little different, with both exercises prescribed as solid strength blocks.

Each set of strict presses were combined with 10 band pull-aparts. Again, it’s important to (1) ensure that the shoulders are kept packed down away from the ears, and (2) that the movement is initiated with the shoulder blades pulling together before the arms begin to pull-apart. 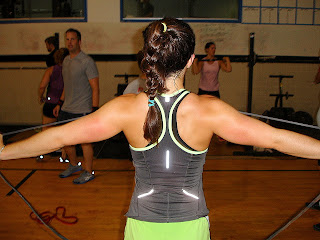 Also, when pulling on the bands, remember to keep the elbows extended, pulling the band apart, rather than back. OH, and just in case anyone of you are wondering, the band should probably be making contact with your chest, just above your nipple-line.

The combo sets of strict presses were followed by three sets of push press. Lifters could choose to start where they left off with the strict press, or add weight as desired.

Wall Ball Burpees = P1 performs 1 wall ball, throwing the ball at a slight angle so that it comes down to his/her partner. Immediately after throwing the ball, P1 does a burpee, while at the same time, P2 is performing their wall ball. After P2 throws the ball, they then do a burpee. A rep is complete only once each person has done 1 wall ball and 1 burpee. The trick is to complete the burpee fast enough to be on your feet, ready to catch the ball your partner just threw. 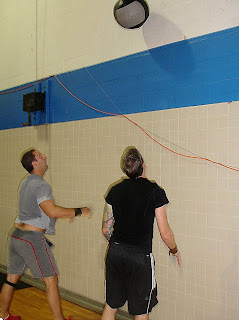 The size of attendance, as well as the even number of the 6pm and odd number of the 7pm, necessitated some class-specific adjustments to the met-con. The 6pm was broken out into groups of 4, while the 7pm was divided into groups of 3. Each group chose a single medicine ball with which they could adequately perform partner wall-ball burpees.

To complete a round in the 6pm class, one pair did 5 WBburpees, then rested while the other pair did 5 WBburpees. Once each pair had completed 5 rounds, they headed out the door for a block run (800m). Groups did not have to run together, but the group didn’t finish until the last person was in the door. Things changed a bit for the 7pm, where only one person rested at a time and rotated in after the working pair had completed 4 WBburpees. After completing 6 rounds in this fashion, the group left for their block run. Results are posted below, although it appears the marker started to fail out on the 6pm class, so if your group isn’t shown below, please fill in the details in the comment section. 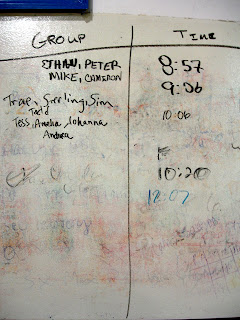 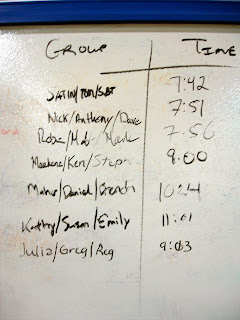 Hope everyone had a great holiday weekend. See you back on Thursday.