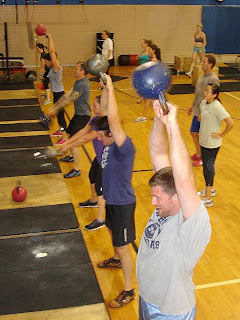 Rather than our normal Big Swole Tuesday, we decided to change things up a bit. We still needed to get our pull-ups in, but instead of a stand alone strength portion, we folded them in along with two other movements for a nice little 3-peat of fun.

Each person had to complete all their own reps, although those reps could be completed in any mix desired (e.g., when the workout called for each person to do 10 pull-ups, they could all 10 in a row, or they could do 5 and 5, or they could five sets of 2 – the mix was up to them) The 6pm class was a mix of pairs and trios, while the 7pm class was all trios. For Pairs, each person had to finish all their reps before the pair could rotate to the next exercise. However, for the Trios, went for a slightly execution where everyone had to start with the same exercise, but the first person done could rotate to the next exercise before the others were done. This allowed for a little more work, and put the trios on even ground with the pairs. 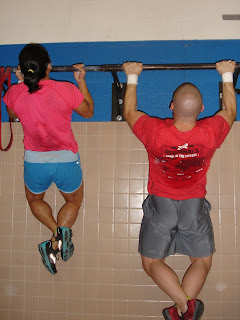 So Pairs would complete 20 total pull-ups before rotating to the boxes to complete 40 total Box Jumps (Trios completed a total of 30 pull-ups/60 box jumps, but again, the first person done could rotate over to the box jumps before the other two finished their pull-ups). Box jumps were prescribed as step-down only for the duration of the workout.  Groups worked to complete as many rounds as possible within 8 minutes before taking a 3 minute rest break. After the rest break, the pull-ups were removed from the picture. 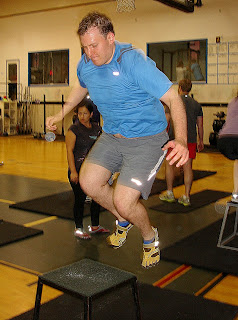 Similar to the first couplet, each group started with the box jumps, with Pairs completing 20 total reps before moving on to complete 40 total KB Swings, while Trios completed 30 total Box Jumps and 60 total KB Swings.

Less than 3 weeks ago we did a workout with high rep kettlebell swings (“FOUR ON THE FLOOR“), and in the follow up post, we reminded everyone of an easy way to keep control over the KB as your hands get sweaty and the grip flags. Who of you remembered? Who of you was paying attention the first time? If not, I bet you will next time.

Another 3min rest, which probable felt a little shorter than the first 3min rest break, and it was on to the last 8min couplet. 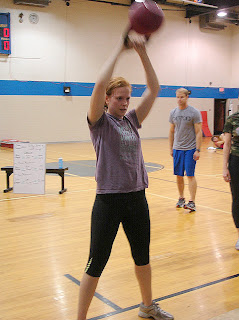 The KB swings were cut in half, but instead of box jumps it was burpees. This is where stabilization really comes into play. The second set of KB Swings were the wake up call, where heavy breathing as a result of the burpees plays havoc on your ability to maintain a tight mid-line.

All in all, great work by all! This was a workout that crept up on people. Written on the board, it seemed like a lot of work, but the look on most people’s faces after the first 8min AMRAP seemed to say “that was tough, but this isn’t so bad.” The trick is that the first round was about maximizing pull-ups before muscular failure set-in. While muscle failure is a miserable experience, it doesn’t have that nauseous, this-is-gonna-suck type of feel. No, that didn’t sink in until the second 8min AMRAP, as the metabolic impact of the box jumps started to be felt, doubled in effect when coupled with the swings. By the 3rd 8min AMRAP, it was just a gut check – literally, as the requirement to keep the core tight during the swings was really taxed by the lingering effect of the box jumps coupled with the immediate effect of the burpees. 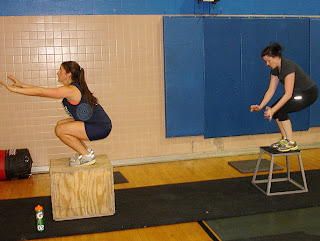 At the close of the workout, everyone was sent out the door for a 250m cool down walk before we stretched out the calves and achilles. Great work everyone – not our usual dose of Get Swole Tuesday, but all in all, not a bad way to enjoy the cooler weather. See you all on Thursday.