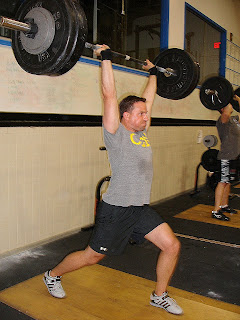 Four weeks ago, we made a concerted effort to point out that the jerk – more specifically, the split jerk – is an Olympic lift as much as the snatch and clean are. Many newcomers to the Oly lifts get extremely over-wrought thinking about the snatch and clean, but truth is, the split jerk requires just as much respect, concentration, and practice, and will deliver just as much reward if properly executed. 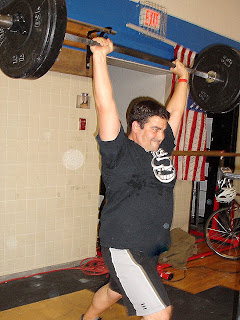 When we last covered the split jerk, we set aside a large portion of class to simply review the movement without any weight. We also dedicated a majority of the folliwng blog post (“ALL IN A DAY’S JERK“) to covering the foot position in the jerk, as well as linking to past posts that covered the general execution of the lift (“AND YOU JERK IT OUT“). Cycling back around this Tuesday to the split jerk, we spent roughly 10 minutes after the warm-up doing a shortened review, just to remind everyone of the proper positioning and execution, before putting it into practice with some weight. 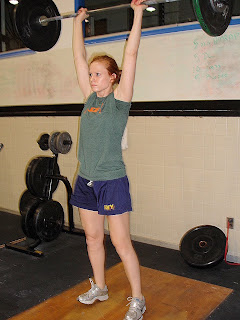 Tuesday night’s strength session doubled up with split jerk with the slightly less complicated (but slightly less powerful) push jerk. By having lifters perform a push jerk followed immediately by a split jerk, our goal was to cue the explosive hip drive needed to start the bar moving upward, followed by the requirement to push under the weight when it’s heavy (or, conversely, when the athlete has already been taxed). This comparison style double really highlights the benefits of the split jerk, allowing a lifter to push down farther and faster under the bar rather than trying to push the weight higher above their heads.

Following completion of the strength sets, class split out into pairs, grabbed a pair of dumbbells (RX’d weight was suggested at 1/3 to 1/2 body weight), and then lined up along the sideline for the night’s short sprint style met-con. Each partner was to complete 12 renegade rows (no push-up, just the rows, at 6 per side), and then take off into a 150′ shuttle run consisting of 1/2 the width of the court and back, and then a full width of the court and back. Once back from the completed shuttle, the second partner began their 12 rows and run, until both had completed 4 rounds.

The form improvement, and comfort, with the split jerk was evident last night. If you didn’t already, take the time to review the last two split jerk posts, as you can pretty well bet we’ll all be seeing these again very soon.

Also, for those of you who haven’t caught it yet, take the time to check out this really introspective piece from the NY Times written by CFDupont’s own T.M. on the sometimes uneasy position of being a US-veteran turned student:

For a Student Veteran, Graduation Is the Next Mission 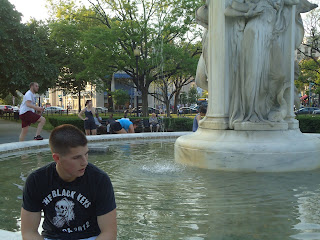 Definitely a piece to give you pause. See you all on Thursday.