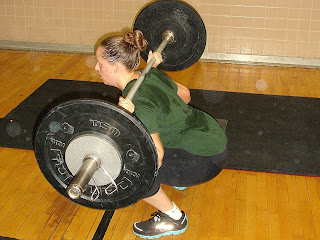 Although the masses seemed to be clamoring for a long, grinding met-con after Tuesday, a different sort-of conditioning workout was waiting for everyone on Thursday, but one which would get the heart rate up just as much, if not a little more. 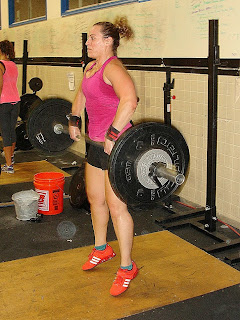 1 rep of the Bear Complex =

Each round = 5 reps of the above. Individuals could choose to combine the front squat and press into a thruster, as well as combining the back squat and BTN press into a BTN Thruster. Squat cleans were also allowed, meaning the first move could actually be a cluster (squat-clean-thruster). Transitions between each 5-piece-rep was to be touch and go; after the BTN Press, everyone was to lower the bar to the waist, sink down, touch the bar to the ground, and then immediately reverse direction into a power clean to begin the next rep. There was to be no resting on the ground, not even to reset the grip. You could, however, rest with the bar any where on the body (in the crease of the hips, in the front rack position, on the back), just not on the ground. Add weight each subsequent round until you find a max for the complex. 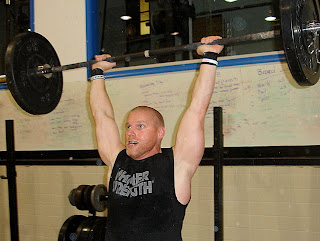 Complexes are a great alternative to traditional conditioning because they take an anaerobic movement and put it at an aerobic pace. In other words, the combine strength development with the usual effects of cardio: higher heart rate, shortened breathing, elevated body temperatures and the resulting sweating. Complexes also require a substantial amount of mental preparation in addition to the physical exertion. Every time you get ready to start the next round, you must steel yourself that you have not one, five, ten, or even twenty individual movements before you reach the end, but twenty-five (25). 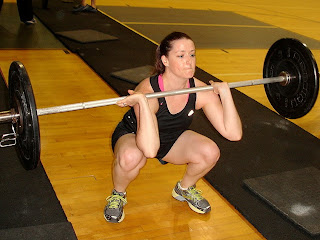 Speaking of 25 movements, you may wonder why we dubbed Thursday night’s workout the “Bear Jr.”? Well, the original CF version of the Bear Complex is 5 rounds of 7 reps (rather than the 5 rounds of 5 reps we did Thursday night) for a total of 35 individual movements per round. We also modified the rules in terms of what was acceptable by allowing squat clean, as opposed to the original CF version where the clean had to finish in a standing position before beginning the front squat/thruster. We’re rebels like that. Speaking of the original CF version, and since a few people were reminiscing last night about the old demo video of The Bear, I thought I’d post it below for giggles (from 2008, I believe):

Nice work everyone. Be sure to wish Ben and Sebastian good luck as they prepare to compete in this weekend’s Team Super Fit Games being held down at Trident CF in Alexandria, VA.

And speaking of competitions, everyone is encouraged to consider signing up for two more upcoming back-to-back events:

First, on Friday, October 26th, CrossFit Dupont will again be hosting an Amazing Grace workout to raise money for Barbells for Boobs. Grace is a straightforward barbell workout consisting of 30 clean and jerks (basically, ground-to-overhead) for time. This is a great way to support a good cause while getting in a good workout and having a good time.

If you decide not to participate in Amazing Grace, it can only be because you’ve opted to compete at…

The NOVA Open Weightlifting Championships, being held on Saturday, October 27 at CrossFit South Arlington. Similar to the Cap City Open (held in April at Balance Gym), this meet is being put together and directed by our own Coach Mike Choi, and considering how much Olympic lifting we’ve been doing recently, you are all more than qualified to sign up and compete (to sign up, pay your entry fee and then fill out the start-list information sheet).

Either way, everyone should find themselves with a barbell in their hands at some point that weekend!