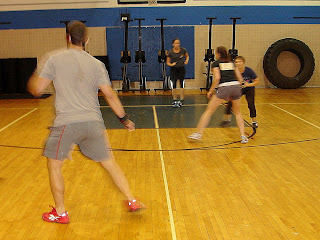 Seems mother nature wanted to remind us just one more time how awesome the gym felt when full of sticky, humid air that did nothing but sit on you like a big wet blanket…and that’s before anyone started working out. 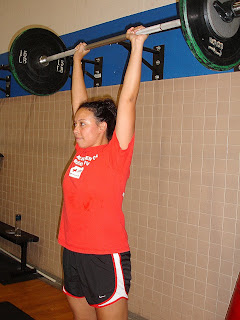 Although heavy weights were in the cards on Tuesday, the heaviest weights were not. In other words, while everyone was allowed to go heavy with their weights, it was also suggested that they not go for a three rep  max PP.  Instead, the focus was to be on proper execution – making each push press as picture perfect as possible.

To those ends, athletes were to stop and reset in the front rack position in between each rep. This would provide everyone with a moment to ensure the bar was sitting across the top of the chest, elbows in front of the bar, with the core engaged before executing the movement. 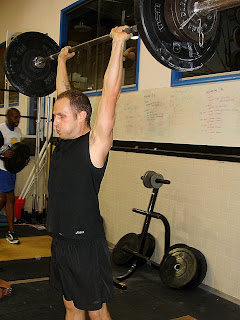 Set-up is just as important as execution, as over-coming an improper or sloppy set-up just means you’ll have twice as much work to do try and execute the lift properly. At heavy weight, that’s going to be difficult, but at the heaviest weight, it’s going to be impossible (and most likely, for the majority of people, the heaviest weight and improper execution are wedded together).

A few reminders on post-set-up execution which were given out Tuesday in class: 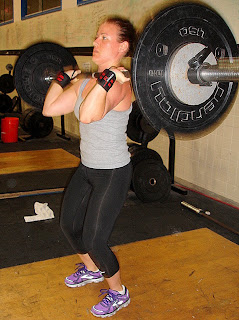 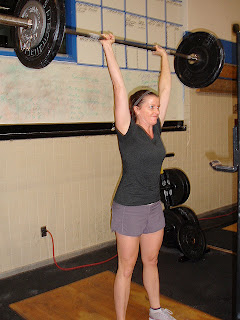 Now, in the past, when a form-focused workout has appeared in class, it’s usually followed in the not so distant future by a near-max effort workout. Probably best to really review the above, and be prepared to implement the cues provided.

Following the strength portion, class was separated into groups of 3 or 4, the bars were set up on the ground, and then class was run through a quick 3 minute met-con. 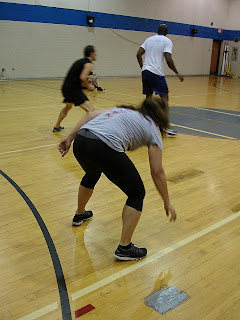 The thrusters were set at one of three specified weights: 45, 65, or 95lbs (although a little leeway was given where needed). The goal was to not put the bar down during the 90second window, but to keep moving, executing continuous thrusters. Post thrusters, athletes moved directly to the middle of the court for 90 seconds of side shuffle.

To close out class, everyone grabbed a resistance band and knocked off 50 band pull-aparts in as few sets as possible. At this point, the shoulders are tired, but that’s when it’s most important to work the upper back – when the shoulders are physically unable to do the work. 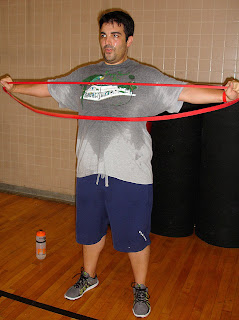 Also, while we’re all remembering to the points of performance for a good push press, we’ll also be readying ourselves for a few “blourpees.” You know, those burpees that show up in class after a few unnamed members whose photos may have been featured on the blog recently, but neglected to comment before they came to the next class. See you all Thursday!