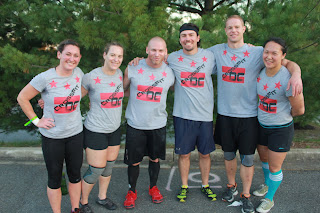 Quite the weekend for CFDC! What with MC and Sebastian’s wedding and the Mid-Atlantic Hopper, CFDC people were spread all over the place. But a few events, no matter how special, don’t come between the DC-faithful and their Sunday class.  Many thanks to Coach Mike for stepping in and covering class. As fate would have it, class performed some solidarity front squats along with their CFDC Team members in Baltimore (more on that later).

Class started off with three sets of 5 reps with the bar only to prepare for the day’s strength session, using the three initial sets to concentrate on form and control. After that, everyone worked their way up to a weight that was 65% of their max, and then began the days working sets: 5 sets of 5 reps each at between 65-85% of their max.

Following the front squats, racks and barbells were put away, and everyone grabbed themselves a KB for a quick and dirty met-con of swings and push-ups. Results as follows: 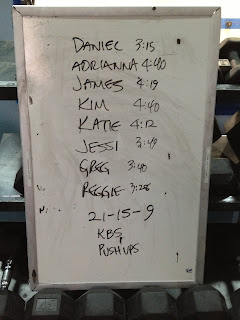 Of course, one of the best things about having Mike lead class – besides his fantastic amount of Olympic lifting knowledge – is his passion and expertise on mobility and flexibility. As such, Mike closed out class with a dedicated mobility session focusing on the shoulders, trunk, and lower legs (who knew our calves were so damn tight!?!). 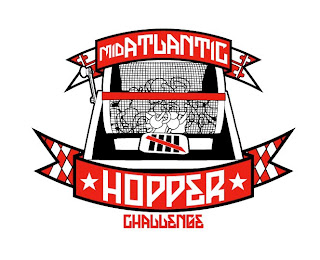 Meanwhile, in Baltimore, Tom A. and the CFDC Team were busy jamming through two days of endless barbell work during the 5th annual Hopper competition. With a mix of cleans, snatches, back squats, front squats, and overhead squats, a person could be forgiven for thinking CFDC spiked the hopper! 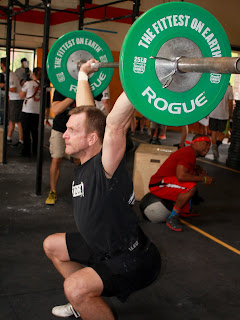 Tom Arend was at it again, tackling the Master’s division workouts like a machine. Tom has spent a lot of time working on his strength this year, and it showed as he manhandled the weights meted out to the masters. The final workout of the first day played right into Tom’s hand when it included two sets of 300m row, a paltry distance for the Hammer!

This year’s Hopper was an especially poignant one for CFDC’s team, which was an awesome mixture of new blood and seasoned veterans: 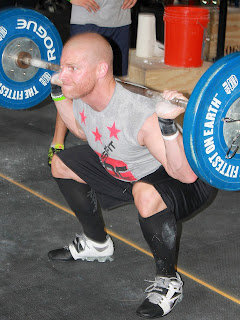 Chris Oehl, who recently migrated to DC from NY, was a competition-virgin before the weekend, but handled it like an old pro, even finding a kipping rhythm for his toes-to-bar when it mattered most: in the midst of 600-rep team workout! 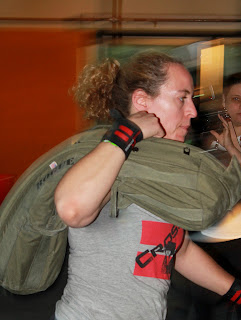 Sara Katz, who was forced to miss last year’s Hopper because of a wedding, made a stunning return this year and was thrown right into the fire when the very first workout called for two female athletes, and only two female athletes! Sara was rewarded for her efforts with a follow-up snatch workout later that day, which she proceeded to throw around like the bar was made from tinker-toys. 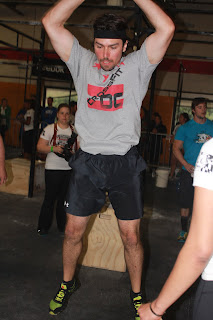 Mark Minukas, who was on the very first CFDC team to compete at the Hopper three years ago also made a triumphant return this year. Despite dealing with a nagging injury, constant business travel, a move and an impending family addition, Mark made it look as if he had been doing nothing else but working out since the last Hopper, chewing through reps of power cleans at 135 and then doing a little trash talking when he finished a rep ahead of Coach Salty. 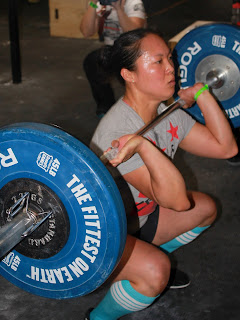 Julia Lam has been a mainstay of CFDC’s teams ever since she was drafted for the first Hopper team three years ago (with Mark and Sara), for which she was given three weeks of preparation (having never done CrossFit before that). Nevermind her impressive array of skills or her depth of strength and endurance, the best thing about having Julia on a team is her ability to giggle at any time, including smack in the middle of a snatch and sandbag-run workout (no, seriously, we have it on video…) 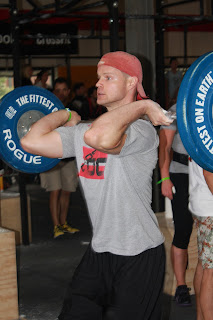 Coach “Salty” did everything possible to appease the Hopper-gods before the competition started, which apparently worked as they not only delivered an entire competition full of barbell work, but more importantly, one entirely devoid of double unders.

Last, but by no means least, CFDC was privileged to have Johanna Murphy of CrossFit Dupont join them for this year’s team competition. Johanna’s first CrossFit competition was last year’s Hopper which she did with the CFDupont team after CrossFitting for only 3 months. To add to the emotion, Johanna is leaving DC at the end of this week, destined for Jackson-Hole, Wyoming. So this past weekend was truly to be a test of her growth before she departed. Just how did she do?
She stole the whole damn show! 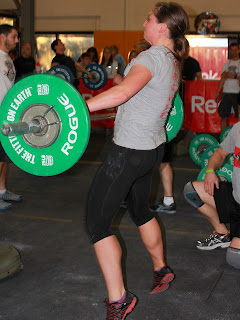 Instead of failing to do the story proper justice by trying to write about it from our point of view, we’ll just let Johanna tell you all about what transpired during the final workout on Saturday with a cut-and-paste from today’s CFDupont post:

I didn’t think I could ever top last year’s emotions, but I did. This weekend at the 2012 Mid Atlantic Hopper I was on a euphoric high. Last year I made two goals to myself. One was to snatch 95#, (this was the team’s final weight challenge and I could barely snatch 65# at the time), two was to finish top 10.

Crossfit DC was nice enough to welcome me onto their team, and although we didn’t make top 10, we were damn close. Of course I was sweaty palms all weekend anticipating what the work outs would be, and of course they pull snatches 135 for men and 95 for women. “Oh god” I said, even though I have gotten stronger since last year my 1 rep max was 90# and I had to do 10 reps at 95#. With a lot of coaching and cheering, I flocking did all 10 reps. They weren’t pretty, but I did it. I’ve never been so proud of myself in my life, it beat my 15 pull ups last year by a long run.

It. Was. Awesome.
You’d have thought the CFDC team had just won the whole competition with the celebrating that ensued after that workout! and Speaking of CFDupont, congratulations to Devon Down and Eric Peterson for an awesome showing – the unicorn was definitely well represented! 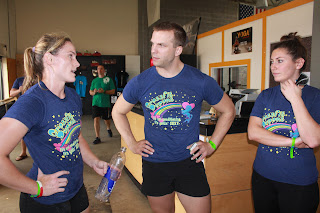 A great deal of gratitude and kudos also belong to the master tactician and coach, Tom Brose, and the ever-present jack-of-all-trades, Stephanie Li, who acted as part coach, part masseuse, part organizer, part coat tree, part referee, part food & water supplier, and full-time photographer. Also, special thanks to Katie Chase for making the trip up to BWI to cheer everyone on Saturday. 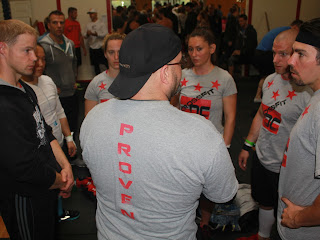 The competition bug has been circling the gym, and lucky for all of you, there’s more in store. Specifically, there are a lot of members in our gym who should be signed up for the NOVA Open Weightlifting meet being held on Saturday, October 27 at CrossFit South Arlington. Remember, Coach Mike will be the meet director for this competition, and considering the countless hours of help he puts into CFDC, the very least we can do is reward him with a substantial turn-out. If you think you aren’t ready, think again – we’ve been covering a lot of Olympic weightlifting recently, and all of us are primed to try out our new skills in a meet setting. If you have questions, or just want to see if you should consider it, please don’t hesitate to ask Tom, Chris or Mike. If you’ve just been dragging your feet, get on it!! Sign up and pay your entry fee, and then fill out the start-list information sheet.

Hope everyone enjoyed the long weekend (if you’re one of the lucky few who got a break), and we’ll see you all on Tuesday.