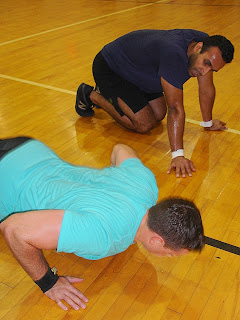 With visions of team workouts fresh in our heads after CF BWI’s Hopper Challenge this past weekend, class encountered a small team workout of their own on Tuesday.

The OHS to Sotts Press was a new addition to the warm-up which simply amalgamated two of our usual movements: simply get the PVC into an overhead position for the OHS, squat down, and at the bottom, lower the PVC to your back, press it back into the overhead position, and then stand up. We’ve noticed in the past that the majority of people simply abandon any pretense of squat form during the sotts press, and so instituted Tuesday’s version in an attempt to stress the importance of positioning in both movements in order to set us up for a more efficient OHS. 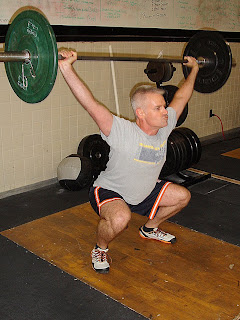 After the warm-up, class split themselves off into pairs to prepare for the day’s workout. Each pair grabbed a bar and wall-ball, and warmed up the OHS by working up to their chosen weight: Men’s RX’d = 95lbs / Women’s RX’d = 65lbs. Once everyone was warmed-up, the rules of the workout were laid out.

The reps of each exercise (except the run) were totals, meaning that partners could split the reps up however they saw fit (alternating 5 reps at a time, 10 reps, or even all 30 in one go) with the one caveat that the reps be split up somewhat evenly (no 50-10 splits!). Both partners had to have returned from the run before they could start work on the OHS, and all reps of an exercise had to be completed before the pair could move onto the next exercise.

The Paloff press is en extremely effective core exercise, and one which we’ve often utilized in class. Thing is, we’ve never discussed them in any detail in a blog post. 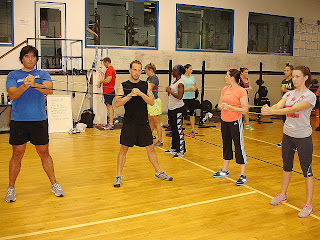 The Paloff press is an anti-rotation core exercise (versus something like the Russian Twists, in which the goal is to create controlled rotation). Why is this so important? Learning how to brace the mid-section and resist rotation is instrumental in protecting the lower back while training. Simply put: learning to resist movement is just as important, if not more so, than creating movement.

The focus of the Paloff Press is the core, and that’s exactly where you should feel it (remember, the “core” we’re talking about is comprised of the abs, obliques, low back, and glutes, since their control over the hips make them a key component of stabilizing the lumbar spine). The closer you keep your feet together, the greater the core activation. A wider stance puts more resistance on your legs instead of your core, so keep your feet no wider than hip width apart. 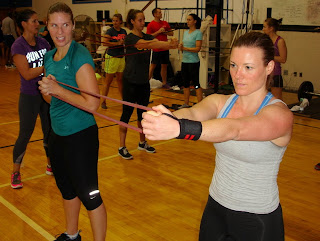 To properly perform the Paloff press, assume a stance with your feet no wider than shoulder width apart. Keep the chest up and facing straight ahead, with your shoulders back and down. Fully extend your arms and pause for a 1-2 second count, and then return back to the starting position (which is generally the sternum, or nipple line for Katie). Remember to control the movement – you not trying to give yourself CPR. 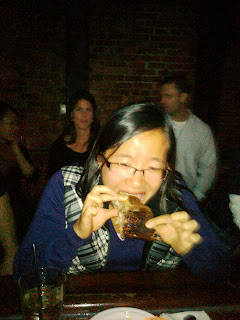 Well, besides Stephanie, who ELSE is hungry? Specifically, who’s interested in grabbing some brunch on Sunday after class?
We’re thinking of hitting up Southern Hospitality in Adams Morgan  for some grub on Sunday around 1-1:30, after class and the coach’s workout. Nothing too formal, just want to enjoy the weather with some food and friends. We’d like a somewhat accurate head count, so let us know in the comments if you’re interested, or shoot Coach Salty an e-mail (crossfitdc-AT-gmail-DOT-com).