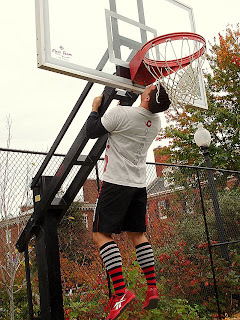 Once again, it’s the end of October which means it’s time for CFDC to take a forced-outdoor excursion while the church takes over the gym for their annual celebration. As our previous announcement post mentioned, although we originally had plans for a more elaborate field trip, Hurricane Sandy and the Marine Corp Marathon dictated otherwise. Instead, class rolled around the corner to Mitchell Park for a quick dose of fun.

After warming-up with a few of our go-to standards (spider lunge, hamstring walk, and inch worm and band good mornings), class turned to a special squat-technique put to use last year at this time: Curb Squats! 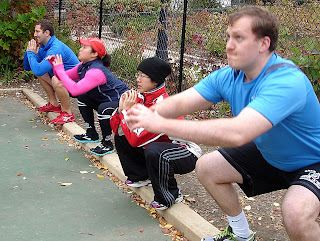 Curb squats are basic body weight squats done on a curb with the front of the feet hanging over the edge. It doesn’t sound like much, but hanging the feet out in space forces us to shift our weight back off the toes – often heard as the cue “from the heels.” Relieving the weight from the toes centers a lifters weight, and thereby helps the lifter recruit the maximum power available from the glutes and quads. Class worked through three rounds of curb squats with a pause and decline push-ups (with feet on the curb and hands on the ground) as skill-development-come-warm-up before breaking out a few KBs to prepare for the workout. 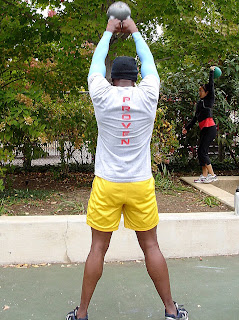 With only 5 KBs to work with and 13 people working out, class broke into the groups, each starting about 2min apart. After the swings, everyone left the park, ran down S St. to Mass Ave, and then turned around and came right back up again, before starting in on the 30 burpees. 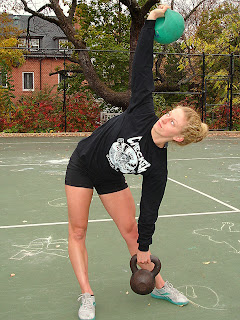 It’s been a while since we’ve incorporated windmills into the program, and this seemed an excellent opportunity to revisit the technique. To set-up, keep the foot on the supporting-side pointed straight (or slightly turned in) while turning the off-side foot out at 45 degree angle. The leg on the supporting-side should remain extended, while the off-side can be bent slightly if needed.

With the KB pressed into the overhead position, lock the lower back into a neutral position, and then slowly push into the hip on the supporting side while sliding your empty hand down the inside of the off-side leg (this is less about bending at the waist than it is about pushing the hip to the side to help initiate and control the movement). Keep the supporting arm straight overhead with your eyes focused on the KB at all times, just as you would a TGU.

After warming up with two rounds of un-weighted windmills, followed by two rounds of varying weight, a second weighted option was introduced, where-in a counter-balance weight was picked up off the ground with the empty hand. 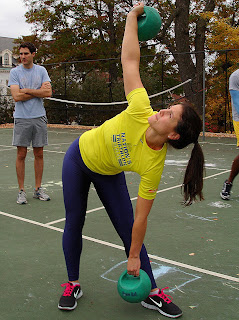 Great work by everyone who dared to challenge the prospect of dealing with early bouts of Hurricane Sandy’s wrath. It was noted, once again, how fortunate we’ve been to have really accommodating weather each and every time we’ve been forced outside over the past 6 years. Here’s hoping everyone makes it through the next few days without incident!