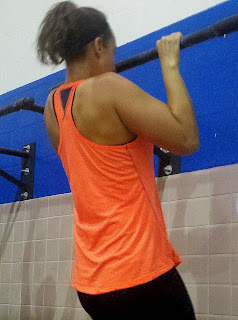 Women definitely cannot do pull-ups. Nope.  No Way.  No How.
Are we late to the party on this topic?  Perhaps, but in case you missed it, roughly two weeks ago the NY Times ran an article entitled “Why Women Can’t Do Pull-Ups,” by Ms. Tara Parker-Pope.
You can click the link for the full text of the article, but the summary is this: exercise researchers from the Univ. of Dayton, led by Prof. Paul Vanderburgh, took a group of 17 women who couldn’t do a single overhand pull-up, and then trained them 3xweek for 3 months.  The training included “lifting weights” and incline rows (no actual pull-ups, assisted or otherwise, were used). At the end of 3 months, the group was retested, where upon the researchers noted that, overall, the group “had increased their upper-body strength by 36 percent and lowered their body fat by 2 percent,” but that only 4 of the 17 achieved a single pull-up. Thus, the study concluded that “no matter how fit they are, women typically fare worse on pull-up tests.”

SO – what say all of you? Intrigued? Annoyed? Skeptical??
While you’re formulating your own thoughts and comments, read on for a few of our select ruminations on this earth shattering proclamation from the NY Times and the Univ. of Dayton.

First, the NY Times Article:
Simply comparing the title of the NYT article and the concluding line of our summary above should be enough to warn you of the over-arching problem with Ms. Parker-Pope’s reporting. This is a prime example of so called “yellow journalism,” a term coined in the late 19th century to describe journalistic exaggeration which relies upon, in part, eye-catching headlines based on pseudo-scientific assumptions. Does this mean the study wasn’t scientific? No, although we’ll address some of its shortcomings in a second. What it does mean is that the NY Times, and specifically the article’s author, blew up the results of the study and made ridiculous claims for a catchier title. It’s a long way from “not as good at pull-ups” to “can’t do them.”

Secondly, the Study:
In setting up a study, it’s up to the organizers to control as many variables and outside influences as possible. This helps avoid skewing or biasing of the results. Mr. Vanderburgh and his crew used an awfully small group of just 17 women. The larger the study group, the more trustworthy your results. More to the point, there’s no mention of age range of the women, their weight or BMI, or even what sort of physical shape they were in before they started the study other than they couldn’t do a pull-up (for example, were they current athletes, former athletes, life-long couch potatoes, what?). Any of those factors would certainly have a very influential impact on the results.

Speaking of results, what about the researchers interpretation of the outcome? Mr Vanderburgh was shocked that only 4 of the 17 women were able to do a pull-up at the end of 3 months, but that’s nearly 25% of his study population. All things considered, 25% is not an insignificant number, especially when viewed in light of the study was set up.

However, perhaps the researchers didn’t have access to a larger population to pull from, and/or simply wanted a small but random selection of people. Maybe they were expecting 50% or more to achieve a pull-up. Yet that doesn’t explain why the organizers would choose to use an exercise program which purposefully omitted pull-ups. If the aim of the study’s organizers had been to determine the efficacy of their non-pull-up pull-up program, then goal achieved. Yet, their aim was much broader: to see how hard it was for women to achieve their first pull-up. To use a program in which none of the subjects actually perform any sort of pull-up is sort of like a driver’s education course in which none of the students ever actually practice driving a car. Sure, some would pass, but to what ends, considering the desired goal is to actually have the majority pass? At the very least, the study’s organizers would have been better off dividing their population in half, and having half follow their program, while the other half follow a program in which they actually worked pull-ups during their exercise regimen. This at least would’ve given Mr. Vanderburgh slightly more concrete results on which to base such assertions that, even when looking at a collegiate athlete, such as a volleyball player, he wouldn’t think they could do a pull-up even though he knows “she’s fit.”

Again, these are just a few of our thoughts on the issue. We’d like to hear what you all have to say about it. Do you agree with NYT? With the study? With us? Are your feelings any different now than they were before reading this post? Sound off in the comments and let us know.

PS: for those interested, we scoured the internet for a copy of the study, and it’s nowhere to be found – unless of course Ms. Parker-Pope and the NYT were referring to a similar study by Mr. Vanderburgh, only published 9 years ago, which was entitled “Training College Age Women to do the Pull-Up Exercise”. Still, even in that study, there’s no mention of age (other than “college age”), nor of the participants relative fitness.