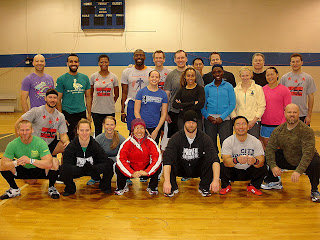 Well folks, this past Sunday was our last official class in Balance Gym Kalorama. In honor of the occasion, we decided that we needed lot’s of barbell use.

A selection of box heights, both to jump from and to jump to, were set up in the studio for class to partake of. Everyone was encouraged to work-up in height as they progressed through the sets (the general hint is not to go for broke on the first set, though). 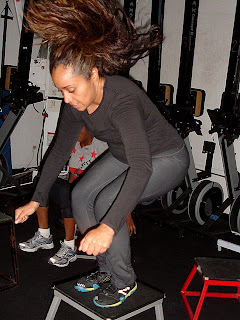 A key piece which will dictate both how explosive you are, and thus how high of a box you can jump onto, is the use of your arms. As you rock back, pull the arms back till the your hands are at your sides at least, preferably just behind you, similar to what you would do (or should be doing) in a broad jump. As you rock forward, drive the arms forward and up to help add explosive momentum to your jump. And, since the boxes were out, we decided to use them for the next part of the workout as well.

For Sunday’s work, the sets were left open ended, with lifters increasing weight across all 6 sets as able. 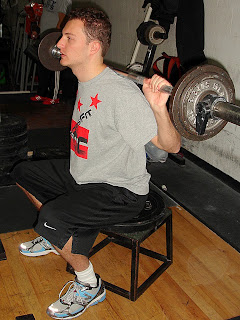 We’ve often paired seated box jumps and box squats together before in a single workout, and for good reason. Both rely on explosive strength: the box jumps to move the body through the air, the squats to move progressively heavier weight, with each incorporating a complete unloading of the legs in the bottom position. By de-loading the legs in the bottom of the squat, you force the muscles of the posterior chain to work extra hard to re-tighten before pushing the weight back up to standing. 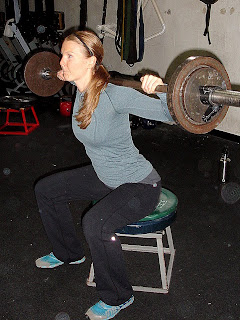 Post box-squats, everyone moved their bars from the racks to the floor. We’ve paired box-squats with speed-pull deadlifts before, but not quite like this.

Everyone was told to take a few warm-up sets of the speed-pulls, working up to roughly 50-60% of their 1RM deadlift weight (or as near as could be agreed upon by the group). Once everyone had their bars loaded, they set about discussing how best to proceed through the following workout: 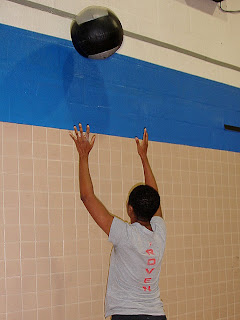 The first set of speed-pulls, while everyone was fresh, were expected to be crisp and well executed, but it was the second set – the ones to be done post 30 wall-balls and 30 burpees – that we were keen to focus on. No, the DLs weren’t heavy, but because of the “speed” label, and the fact that they were being done in a group setting during a met-con-esque workout, the potential for sloppy set-up and execution were relatively high. 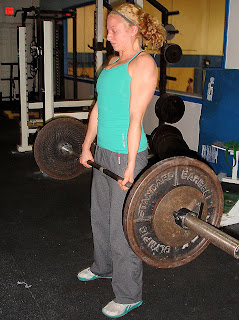 We’ve said it before, and this was a great situation in which to reinforce our speed-pull mantra: “Don’t get “speed” confused with “rushing,” though. Speed pulls are about the velocity at which the weight is moved, not rushing through the movements to perform the fastest but sloppiest movement possible. Form and technique are still key – only the weight (decreased) and speed (increased) are changed.”

And with that, we closed out our last official class with a group photo. We’ll be in touch this week with some updated news. Until then, feel free to post ideas on how best to use up those left-overs from Thanksgiving! 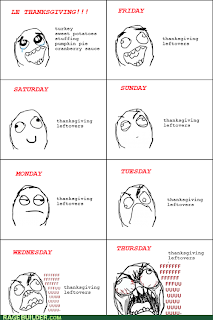