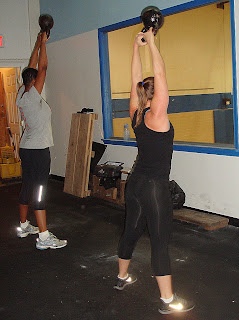 In an on-going effort to stress the fundamentals of movements in these few weeks of “minimalist” work-outs, we turned to one of the most often used, yet most often-under-taught movements: the kettle bell swing. We reviewed a lot of information on Sunday with regards to the KB swing, with multiple turns at the KB utilizing a multitude of techniques. Suffice it to say that there was something for everyone in the program presented.

A variety of KBs were lined up for the day, enough so that everyone could find something to work with. Before touching the KBs, however, a couple of key points were reviewed: 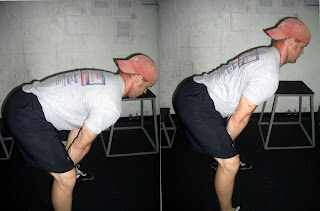 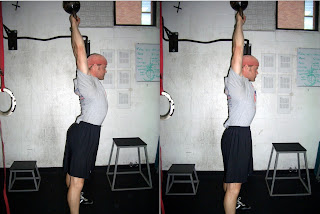 Class then set about working through a steady progression of swings, constructed to not only teach everyone how to properly approach the KB swings, but where to scale to during a workout. This included both Russian Swings and American Swings. Confused about the differences? There’s an older CF Journal article (2004) explaining why CF prefers the American-style, overhead swing to the Russian, eye-level swing. However, I really like this breakdown of the two styles from CF Silicon Valley entitled “Ending the Kettlebell Swing Controversy.” I highly recommend you check both of them out. 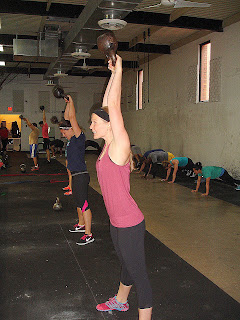 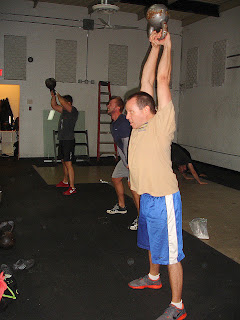 Of course, no tutorial would be complete without a quick discussion about scaling. Unlike the profusion of information above, this one is simple and straightforward: Safety over Intensity!

In other words, choose the most advanced standard which you can perform safely and effectively over the course of a workout, rather than the one which would require you to resort to sloppy technique and poor body posture. Of course, the other side to this is not to scale down to a lesser standard simply because you want to go faster, or want more reps in a given amount of time. We’re talking safety, not better final results. 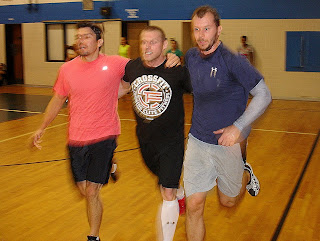 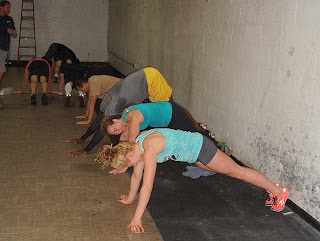 Of course, there was also that whole pesky safety rule about not crossing the lane inside of the door, which caught one team on the way into the studio, and another team on the way out, both of whom got stuck with a quick, but costly, 10 burpees.

To close out, we decided to have a little fun while working on our balance. Teammates were now turned on each other for three inter-team wrestling matches. For the balance wrestling, opponents stand facing each other, slightly offset so their right feet can be placed forward and instep to instep. They then grasp each others right wrists and begin to push, pull, twist and turn, moving the left foot as much as needed, but keeping the front foot planted. The first person to move the forward foot loses.

A little something different to close out the week. We’ve been granted some storage space at the gym, so we’ll be slowly introducing some more pieces of equipment in the coming classes. Until then, stay tuned for more announcements. See you on Tuesday!