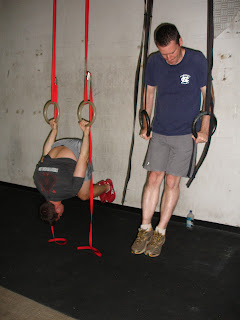 For quite some time now, or ring work sessions had been limited to our early Sunday morning Elements session. This Tuesday we decided to bring that work into the main class. Although not the usual heavy weight or lung-searing met-con we’re usually used to (or might prefer), the ability to understand where our body is in space (proprioception) and then control our body when performing certain movements (kinesthesia) will most certainly pay off in the long run. 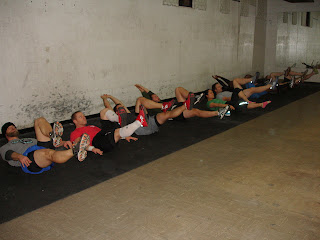 To kick things off, class spent some time on the floor reviewing the Hollow position. Tuesday’s hollow position review included:

The goal each time is to work on tilting the pelvis forward/up while pressing the low back into the floor. Remember, this is NOT an ab exercise – it works the abs, yes, but the point of this drill is to teach you control over the hollow position in an unloaded position, such as an handstand or supported position on the rings. Oddly enough, these two positions were both included in the Skill/Strength session to follow.

Following the hollow review, class broke out into groups to put that pelvic control into action, while getting some much needed time practicing handstand kick-ups and ring work. 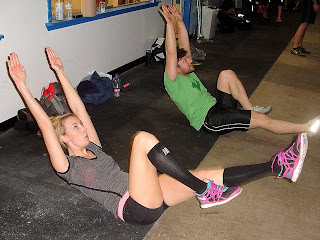 Each time through, everyone performed 5 hollow rocks with only one leg extended, then 5 with the opposite leg extended (again, working on controlling position, rather than going for intensity), followed by 5 handstand kick-ups. For the kick-ups, the only caveat was that the hands had to begin planted on the floor (as opposed to the cheerleader approach, with a big step, throwing the hands down while swinging the legs up against the wall).

The one thing that did change with each round was the ring work. The first two rounds were programmed as ring supported positions, with arms fully extended, shoulders back and down (away from the ears) and hip tucked forward into the hollow position (imagine that!?!): 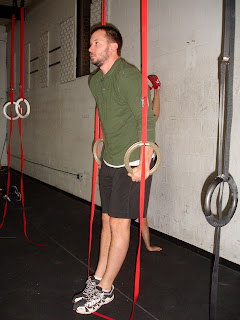 SBV in a solid hollow position while extended on the rings

On the third round, the ring work changed to inversions, with everyone taking a firm grasp on the rings, tuck your feet in, lean back so that you invert your body, and then attempt to straighten your legs up towards the ceiling: 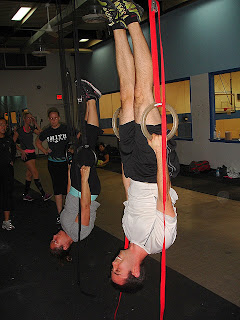 If this was the first time someone had done an inversion on the rings, then the fourth round was another inversion, and, if comfortable, combined with a knee tuck (tuck your legs back into your body and roll backwards just slightly till you are almost looking down at the floor, and then roll back to the inverted position): 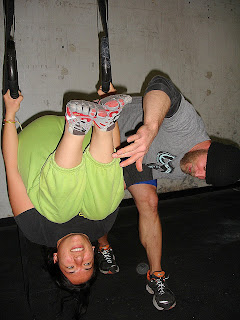 If inversions were old hat, then the fourth and fifth rounds were Skin-the-Cat, wherein you perform the inversion, tuck, and then allow your legs to un-tuck, reaching your toes towards the floor; when you’ve reached your limit, bring your legs back in towards your body, roll back the inverted position, and then lower down. 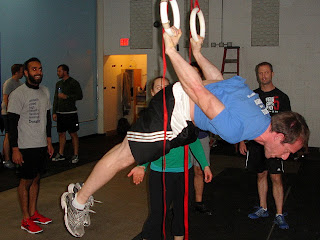 OK, so Dan may have been unfolding after a back lever attempt,
but we’ll just pretend it was a Skin the Cat

After 5 rounds, time was given to play around on the rings or on the wall with handstands.

Finisher:
Squat Hold and Push-Ups
As a quick finisher, each group was to complete 5 rounds of 5 push-ups/plyo push-ups/clapping push-ups, except while one person was doing their push-ups, the rest of the group held a squat. Or at least, that’s how the 6pm did the workout – 7pm was small enough that the workout got changed up to a class-wide group with 3 rounds of 10 push-ups and squat hold:
(wow…with coaches like that, who needs rivals?)
Nice work in a slower, more skill based class. That usually means the following class has something brutal in store. See you all on Thursday for whatever that may be!
.
.